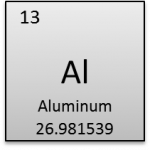 The chemical symbol for aluminum is Al. Its atomic number is 13, and accordingly, it has 13 protons and 13 electrons, giving it a net charge of 0. Its atomic mass is 26.981539, and it has 14 neutrons. It has an atomic radius of 143 picometers. It is located in the boron group, which is the thirteenth column in the periodic table. All of the elements in this group are metals with variations of a silvery-white color except for boron. None of the elements in the boron group ever existed in their pure form before technology in chemistry provided the ability to isolate them. Aluminum is located in the second period of the periodic table, which means the aluminum atom has two orbitals for its electrons. There are a total of 27 aluminum isotopes.

Aluminum is solid at room temperature, and it’s a relatively strong metal, especially considering how lightweight it is. It is a post-transition metal (also called a poor metal), which means that it is softer and has a lower melting point and boiling point than regular metals. It is also a great conductor of electricity and heat, so if you ever see your little brother attempting to put any aluminum foil in an electrical socket, stop him! (In fact, if you see your little brother trying to put anything in an electrical socket, you should stop him.)

Aluminum is light compared to most metals. Its density is 2.7 g/cm3, which is only about three times the density of water, meaning that even though the aluminum foil in your kitchen feels light, a ball of it will still sink in water. It is one of the most ductile metals (meaning it is able to be deformed, such as into a thin wire, without losing its toughness), and it is one of the most malleable metals (meaning it is able to be hammered or pressed thin without breaking or cracking). Aluminum also is non-magnetic, so no, we won’t be able to use a refrigerator magnet to retrieve that ball of aluminum foil we sunk in water.

Aluminum’s melting point is 1,221°F, and its boiling point is a whopping 4,478°F. It’s a frightening thought to consider aluminum vapor in the air. Luckily, we’ll never be around boiling aluminum, so no need to worry about breathing it in our lungs!

Aluminum has three valence electrons (or three electrons in the outermost part of its atomic structure). It is extremely reactive, and for this reason, it is not found in its pure form in nature. In fact, once extracted into its pure form, it almost immediately reacts with oxygen in the air. Only the aluminum atoms on the surface, however, react with oxygen. (Makes sense because the air can’t reach the atoms inside a chunk of aluminum!) This reaction creates a thin, transparent (and inert!) layer of aluminum oxide, which actually protects the aluminum from any further corrosion or reactions. This is similar to the reaction between iron and oxygen (in the presence of water) that creates rust, except society typically tries to avoid having iron rust. (No one likes a rusty bicycle!)

Another interesting chemical property of aluminum is that when it is in a powdered form, it catches fire incredibly easily if exposed to flame. Aluminum is also reactive with both acids and alkalis (bases that dissolve in water).

Aluminum has three oxidation states. The most common one is +3, which is found in the molecule Al2O3. Its other two possible oxidation states are +2 and +1. Aluminum’s specific heat is 0.902 J/g °C, and its electronegativity has a value of 1.61. Its heat of fusion is 10.79 kJ/mol, and its heat of vaporization is 293.4 kJ/mol.

First, what are isotopes? Isotopes are atoms of the same element that have the same number of protons and electrons but have a different number of neutrons.

The standard atom of aluminum has 14 neutrons (with 13 protons, giving it a mass number of 27). This isotope is the only stable, non-radioactive isotope of aluminum. It makes up more than 99.9% of the total aluminum naturally found on Earth. The only other isotope that naturally occurs on our planet (that makes up less than 0.1% of total aluminum) is the isotope with 13 neutrons (with 13 protons, giving it a mass number of 26). The half-life for this isotope, also referred to as 26Al, is 720,000 years! (A half-life is the amount of time is takes for half of a sample of radioactive material to decay into a different nuclear species.) This naturally occurring isotope with such a long half-life has helped scientists date glacial ice and meteorites. The other 23 aluminum isotopes were created by scientists, and they have much shorter half-lives, ranging from about 6.5 minutes to less than 35 nanoseconds. 19Al through 43Al represents all 25 aluminum isotopes.

An alloy is a metal that is combined with another substance, usually making it stronger, harder, lighter, or better in some way. In regards to aluminum, it is typically mixed with another material primarily to make it stronger. The percentage of aluminum in its alloys usually ranges from 85% to over 99%. Some of the most common elements combined with aluminum to create Al alloys are iron, silicon, copper, magnesium, manganese, and zinc. 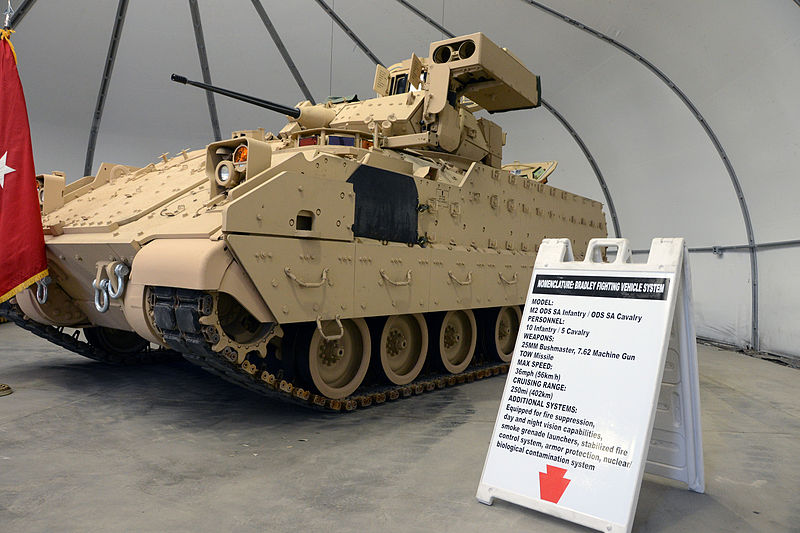 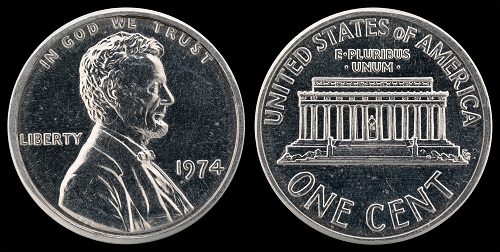 Aluminum is the most abundant metal on our planet, and it makes up 8.1% of the Earth’s crust. It’s certainly more common here than it is in the known universe, in which it comprises only 0.005% of everything around us. Believe it or not, aluminum is even present in our bodies, but only at 0.00009%.

Aluminum is used in so many things, it’s hard to look anywhere in modern society and not see something made with it. Of course, the well-known uses include America’s favorite beverage container, the aluminum can, and America’s favorite kitchen helper, aluminum foil. However, many are not aware that aluminum makes up our power lines, aircrafts, trucks, baseball bats, bicycles, and the Apple watch.

Many people mistakenly believe aluminum foil is pure aluminum. However, it is typically anywhere between 92% and 99% aluminum. Pure aluminum is too reactive to exist in our kitchens. (Remember, pure aluminum will react with oxygen in the air.) Aluminum foil is often mistakenly called tin foil, but they are completely different products. Tin foil was used in the late 18th and early 19th centuries before aluminum foil. However, food wrapped in tin foil took on a tin-like taste, and when aluminum became available for commercial use, it served as a much better substitute.

Aluminum is primarily found in minerals in the Earth. However, extracting it from these minerals is extraordinarily expensive. Bauxite is a type of ore that looks like ordinary rock, but it is actually made of about 15% – 25% aluminum. It currently is the world’s primary source of new aluminum because scientists have devised a way to extract aluminum from it by using a method that is more inexpensive than the methods used to extract from other aluminum-containing minerals. Despite the improvement, it is still expensive to extract Al from bauxite. 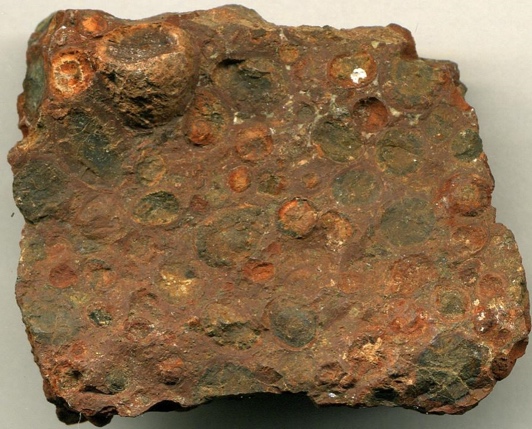 “Pisolitic Bauxite 1” by James St. John is licensed under CC BY 4.0.

Aluminum is 100% recyclable. It is one of the very few materials that maintains all of its properties after it is recycled. It is just like brand new aluminum after recycling! However, it is still often thrown in the garbage. Recycling aluminum requires only 5% of the energy that is used when extracting it from ore bauxite, making it significantly less expensive as well.

This question has a two-part answer.

Because aluminum is not present in a pure state, it couldn’t properly be discovered by extracting it until the existence of electricity. In 1825, Hans Christian Oersted, a Danish chemist, used electrolysis to break down the chemical compounds in a mineral into their elements. He was able to isolate only tiny bits of aluminum, but that was all that was needed to get the ball rolling.

Prior to Oersted’s official discovery of isolated aluminum, British chemist and physicist Sir Humphry Davy proved the existence of aluminum (even though he couldn’t extract it), and he is responsible for giving this element its name in 1807. He originally called it alumium, then changed it to aluminum, and then finally changed it once more in 1812 to aluminium. His colleagues all preferred the final name, aluminium, because, to them, it had a classical ring to it, sounding more similar to the other elements ending in -ium (helium, potassium, sodium, magnesium). In the early 19th century, some still referred to the 13th element as aluminum, but the predominant spelling was aluminium. It is still referred to in this way in Britain today.

In the United States, both spellings existed, but because this element wasn’t discussed much due to the difficulty of extracting it from minerals, no official name was adopted until around 1895 when aluminum started becoming much more popular (largely due to scientific advances that made more aluminum extraction possible). Noah Webster’s Dictionary still had Davy’s second spelling listed: aluminum. It is thought that journalists turned to this influential and popular dictionary to determine the spelling of this exciting new metal. Ever since, Americans and Canadians have referred to Al as aluminum whereas most of the rest of the world uses the British spelling.

Aluminum in the Future

Scientists have recently made a transparent armor made of aluminum that is incredibly strong, light, and durable. It is made of aluminum oxynitride, and it is projected to replace bullet-proof glass in military vehicles! A thin layer of it provides more protection against bullets than several layers of traditional protective glass, and it’s half the weight. There are hopes it can withstand explosives as well. This new and exciting material, light-years ahead of glass, is yet another testament to the magic of aluminum.