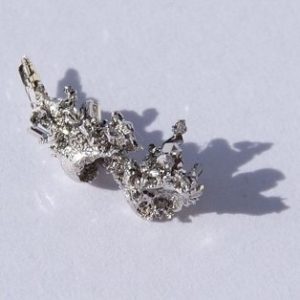 “Palladium (46 Pd)” by Hi-Res Images of Chemical Elements has not been altered and is licensed under CC Attribution 3.0 Unported.

Palladium is a shiny silver metal.  It is a transition metal that is located with the other transition metals in the middle of the periodic table (the d-block). Palladium is most commonly used in jewelry, in catalytic converters for cars, in the electronics industry, and as a catalyst in scientific research.

Palladium’s Place in the Periodic Table

Palladium is the second element in Group 10 of the periodic table, after nickel. The elements found in Group 10 are part of the larger transition metal group. Metals in Group 10 are known for their white, silver color and luster (very shiny). They are resistant to corrosion (tarnish) and are ductile (malleable and able to be drawn out into a thin wire). Another grouping exists that is less formal: the “platinum group metals.” This group includes palladium, platinum, rhodium, ruthenium, iridium, and osmium. Though these elements are from several periodic groups, they share very similar chemical properties. “Noble metals,” which you may have heard of, include all of the platinum group metals as well as silver and gold.

At room temperature palladium is a soft, shiny metal. In nature it is either found in its pure form or as part of rock minerals, but it is considered a rare element. It is classified as a solid transition metal. However, while all transition metals conduct heat and electricity, palladium is a mediocre conductor in comparison.

Palladium is considered quite unreactive and doesn’t tarnish or corrode in air because it doesn’t react with oxygen at room temperature. This makes it useful for many applications. Palladium is non-toxic.

At room temperature and pressure, palladium is as a soft, shiny metal. It is malleable and ductile and can be beaten into a very thin sheet or fashioned into a long thin wire. It is known for being extremely similar to platinum and belongs to the informally called “platinum group metals.” Palladium has the lowest density and melting temperature of all the elements in this group.

Palladium is resistant to corrosion in air. However, it will tarnish slightly in moist air that contains sulfur, forming palladium sulfate (PdSO4). At high temperatures, palladium will react with oxygen to form a layer of palladium(II) oxide (PdO). It is resistant to corrosion by most acids (except nitric acid) at standard temperatures. Palladium does dissolve very slowly in nitric acid, concentrated sulfuric acid, hydrochloric acid, and aqua regia (a strong acid). Interestingly, palladium can “absorb” hydrogen, forming palladium hydride. Many transition metals can do this, but palladium is unique because it can absorb 900 times its own volume in hydrogen, causing it to expand like a sponge.

Another application for palladium alloys is in dental implants where its inertness (low reactivity) and resistance to corrosion are desirable. Researchers have developed a super strong palladium alloy that contains a little bit of silver and some other metalloids. They have stated this alloy could be used in biomedical implants or automotive and aerospace applications. However, its high cost will prevent any large-scale manufacturing.

No allotropes of palladium exist.

Occurrence and Abundance of Palladium

Palladium has no known biological role and is therefore not found within the human body. It is a relatively rare element and only has a 6.3×10-7% abundance in the Earth’s crust. Palladium is mainly only found in its pure form in Brazil, Colombia, and South Africa. Other than that, it can be found within sulfide-based minerals, like braggite.

In the universe overall, palladium has an abundance of 2×10-7%. The top producers of palladium are South Africa, Russia, and Zimbabwe. It is commercially produced as a by-product of nickel, copper, or zinc refining. In other words, in the process of extracting nickel, copper, and zinc from the earth, small amounts of palladium can be obtained as well. Over 200 tons of palladium are produced annually world-wide. Its rarity is responsible for its extremely high price: over $1,300 per ounce!

The majority of palladium that is produced each year is used for catalytic converters on vehicles. They convert the dangerous chemicals in the exhaust gas (hydrocarbons, carbon monoxide, nitrogen dioxide) into less harmful compounds (nitrogen, carbon dioxide, water), which are what ultimately leave the tailpipe of a car. In jewelry, palladium is known for its durability, low-maintenance, and platinum-like appearance (while still being much cheaper than platinum). Palladium is also used in dentistry (fillings, crowns, implants), medicine (biomedical implants), and electronics (capacitors that are used in cell phones and laptops).

Nearly all of palladium’s uses in science center around its excellent catalytic ability. Finely ground palladium is used as a catalyst for hydrogenation (adding H2) and dehydrogenation (removing H2) reactions in chemical applications. Additionally, hydrogen gas moves easily through heated palladium, allowing it to be separated from other gases that cannot pass through the palladium and purified for further applications.

As early as the 1700s, miners in Brazil knew of a metal they called “worthless gold” or “ouro podre,” which was actually a natural alloy of palladium and gold. The true discovery of palladium is actually quite unique because the discoverer chose to remain anonymous for several years. English chemist William Hyde Wollaston recorded his discovery of palladium in July 1802 in his lab notebook and named the element after the then-recent asteroid “2 Pallas” in August 1802. However, after he created a pure palladium sample, he sold it to a mineral dealer in London, without identifying himself as the discoverer. He simply called it a “new silver” and, strangely, posted flyers about its properties all over the city. Why he chose this method of reveal is unknown. It sounds like Mr. Wollaston was a little bored in lab and wanted to create some hype surrounding his new discovery, don’t you think?

Richard Chenevix was a skeptic of this new material and believed it was actually just an alloy of platinum and mercury. Chenevix himself performed a lot of experiments regarding palladium and, in 1803, received the Copley Medal for his work. Meanwhile, Wollaston published his discovery of rhodium in 1804, wherein he mentioned some of his palladium work. However, it wasn’t until 1805 that, at the very end of a presentation he gave to the Royal Society of London, he finally revealed that he had discovered palladium. This story is a good example of why it pays to keep good lab notebook records: they can be proof of novel work later on! It is now known that Wollaston extracted pure palladium from a crude platinum ore that had been found in South America. After the fact, Wollaston actually explained that he wanted to remain anonymous until he felt he completely understood and could explain all the properties of palladium, which was a smart and safe move on his part, though it is quite clear that he had a little fun with the situation.

Palladium in the Future

Because of palladium’s high cost, people are hesitant to develop many new applications for it. In fact, a lot of scientific research revolves around trying to find cheaper, more abundant alternatives to noble metals like palladium. That said, researchers are still trying to develop better palladium alloys and catalysts for various applications like the hydrogen oxidation and oxygen reduction reactions that occur in fuel cells as well as groundwater treatment and remediation. One way fuel researchers have gotten around the high cost of palladium is to use nanoparticles of it instead. This allows them to use less palladium material and save on costs.