Scandium is a soft, silvery transition metal. It reacts slowly in air and can be dissolved in dilute acids. When it reacts with air it produces a yellowish pink layer of tarnish. It reacts to form hydroxides, oxides, and halides, and it usually donates its three electrons. It is commonly used in alloys of aluminum in aircrafts and sporting equipment. Compounds of scandium can be added to light bulbs to improve the quality of light. Pure scandium is not known to be toxic but some of its compounds can be toxic.

Scandium’s Place in the Periodic Table

Scandium is a transition metal in group 3 that is classified as a d-block element. This means that the electrons with highest energy (found in the valence shell) are held in a d-orbital. D-orbitals hold up to 10 electrons, so there are ten groups of transition metals. Although scandium and yttrium are not technically lanthanides, they are in the same group as lanthanum and have similar properties to lanthanides, such as atomic radius. Scandium was discovered in 1879 by a Swedish chemist, Lars Fredrik Nilson, in the region where he lived, Scandinavia.

Scandium is a soft, silvery metal. There is a trend of increasing atomic radius down group 3, and scandium is the smallest in the group. Ionization energy increases across periods because as more electrons are added to the valence shell across a period, the attraction between the positively charged nucleus and the electrons increases. Therefore, of all of the transition metals in period 4, scandium has the lowest ionization energy. However, ionization energy decreases down groups. This is because the atomic radius increases down the group, and so the distance of the valence electrons from the nucleus increases. Distance weakens the attraction to the positively charged nucleus. So, scandium has the highest ionization energy in group 3. What does that tell us about reactivity? Generally, lower ionization energy makes it easier to remove an electron, and so an element with low ionization energy is more reactive. Based on this trend, it would make scandium the least reactive element in group 3 but the most reactive element in period 4. The same trend is true for electronegativity, which is defined as the tendency of an atom to attract a bonding pair of electrons.

Scandium is an intermediate conductor of electricity and heat. In its pure form, scandium is not known to be toxic. However, some of its compounds may be toxic and should be handled with care. 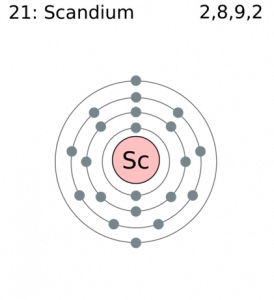 Scandium has 2 valence electrons in the outermost orbital, 4s, while the interior orbital, 3d, remains incompletely filled. For many other elements you have reviewed, electrons fill the orbitals that correspond to their period first. This is true until you reach the transition metals in period 4 through 7. This is because electrons fill orbitals in an order of increasing energy. The 4s orbital has less energy than the 3d orbital, so it is filled first. This explains why the electrons can be added to the valence shell before filling inner shells completely. The most common oxidation state of scandium is +3, which removes all of the 3d and 4s electrons. Other oxidation states are rare and usually only produced in laboratories. Scandium reacts with weak acids. Scandium oxides can form weak acids or weak bases.

Scandium only has one stable isotope, Sc-45. Radioactive isotopes have been produced in laboratories, and they have half-lives ranging from nanoseconds to days. The radioactive decay of scandium can produce isotopes of calcium and titanium. When miners drill for oil, they sometimes need to break open spaces, or fractures, underneath the Earth where the oil can flow and be collected. To determine the location of fractures, radioactive isotopes of scandium are injected deep underground to detect the location of fractures where the isotopes mix with oil.

Scandium triiodide is a metal halide used in high performance light bulbs. Lead oxide, tantalum oxide, and scandium oxide are combined to produce a ceramic material that can be used to detect heat. When infrared light (i.e. heat) strikes the surface of the ceramic, it becomes electrically charged. The electrical signal produced is then transformed into an image that displays sources of heat, such as animals in a forest at night. This is sometimes referred to as night vision.

Occurrence and Abundance of Scandium

Scandium makes up 3×10-6% of the universe, which is similar to selenium. It makes up 0.0026% of the Earth’s crust, which is similar to nitrogen and yttrium. It has not been detected in human tissue. Scandium is only found as compounds in trace amounts in minerals with other elements. Thortveitite (pictured) contains scandium, yttrium, and silicate. Euxenite is a complex mineral of calcium, niobium, tantalum, titanium, yttrium, uranium, and thorium with trace amounts of scandium. Ytterbite also contains trace amounts of scandium with cesium, yttrium, calcium, uranium, thorium, niobium, tantalum, and titanium. These minerals are primarily found in Madagascar and Scandinavia.

The addition of scandium to aluminum creates an alloy with enhanced strength while maintaining a low density. This is useful for applications that require lightweight but strong metals. Aluminum alloys that contain scandium have been used mostly to build military jets. It is not used widely for commercial applications because there are elements with similar properties, like titanium, that are more common and cheaper. Scandium aluminum alloys are sometimes used to build high quality sporting equipment, such as baseball bats, helmets, and bicycle frames. Scandium is also used to make high-power light bulbs, known as metal halide bulbs. Scandium metal halide bulbs produce light with superior qualities that are similar to full-spectrum sunlight. This is useful in photography and film where natural colors need to be reproduced in a studio.

Scientists are improving aluminum alloys with scandium to use as medical implants, such as to join a fractured bone. Scandium radioactive isotopes are being researched for the treatment and diagnosis of cancer. Different scandium isotopes emit different types of radiation. Isotopes that emit electrons when they decay are useful for therapy because they are toxic. Isotopes that emit positrons are useful for imaging, and so can be used in diagnosis. A positron is an anti-matter particle of the electron. Anti-matter refers to particles that have the same mass but opposite charge as their partner. Positrons are the partners for electrons, antiprotons for protons, and antineutrons for neutrons.

Scandium was predicted to exist by Dmitri Mendeleev. He was a Russian chemist who created the first periodic table in 1863 (pictured). He predicted that an element with an atomic mass of 40 to 48 existed, and he called it ekaboron. That element was scandium. But scandium was not discovered until 1869 by Lars Fredrik Nilson – a Swedish chemist. Being from the region of Scandinavia, he named the element Scandium. Metallic scandium was first produced in 1937, and significant amounts of pure scandium were not produced until 1960.

Scandium in the Future

Researchers continue to use scandium to further improve alloys. There are three main properties that can be modified in an alloy to suit a specific need: density or weight, maximum useful temperature, and the maximum force (i.e. strength) that can be applied to the metal without being deformed. One type of scandium alloy, known as high entropy alloy, contains several metals in nearly equal amounts. One example is Al20Li20Mg10Sc20Ti30. When compared to common steel alloys, Al20Li20Mg10Sc20Ti30 is 3-times lighter, up to 5-times harder, and up to 5-times stronger.