Manganese is a silvery metal. It is found on the periodic table with the transition metals, and resembles iron. It has the largest number of stable isotopes of any element. It was a component of pigments used by Stone Age people to draw cave paintings over 30,000 years ago. Today, it is used in alloys of iron and aluminum, in pigments, and in batteries. It is also essential to life.

Manganese’s Place in the Periodic Table

Manganese is a transition metal in period 4 and group 7. It can form compounds with oxygen, alkali, and alkali earth metals to form strong oxidizing agents. Like other transition metals, pure manganese reacts with air to form rust. Some forms of manganese are paramagnetic, which means that they are weakly attracted to magnets. Manganese was present in a black mineral from Magnesia, which is a region in Greece after which the element is named.

Manganese is a silvery gray metal. It is stable at room temperature but reacts with air to form an oxidized layer on its surface (right). It is hard, brittle, and difficult to fuse.  It has numerous oxidations states with varying stabilities. It can be extracted from ores using strong acid.  Manganese conducts heat poorly and has high resistance to electric current. It is essential in most biological systems but its compounds can be very toxic. 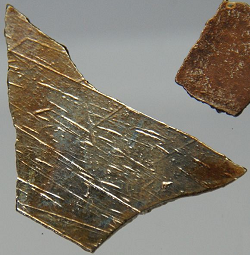 Manganese is solid at room temperature and has a density similar to zinc and iron. It melts at 1246°C. At that temperature, paper would spontaneously combust. It has a boiling point of 2061°C, which is close to cast iron, a carbon and iron alloy. 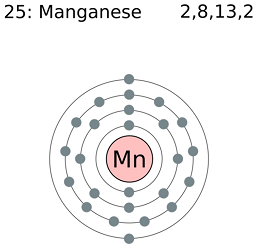 There is only one , Manganese-55, and one radioactive isotope, Manganese-53. Manganese-53 exist in trace amounts naturally.  Manganese-53 has a half-life of about 4 million years. The universe is 1000 times older than that half-life, so most Mangese-53 is produced by the collision of iron with cosmic rays. Seventeen other radioactive isotopes have been identified in laboratories. These have half-lives ranging from a few nanoseconds to about a year. Manganese isotopes are used by geologists to date materials in the solar system, such as meteorites.

Manganese is used in the production of iron and steel, which accounts for 85 to 90% of its demand. Steel that contains manganese has improved tensile strength, which means that it can resist greater bending forces without breaking. Manganese is also used in aluminum alloys to reduce its susceptibility to corrosion.

Potassium permanganate (KMnO4) is a bright purple solid that is one of the strongest manganese oxidizing agents. It was one of the first chemicals used to dye fabrics. As a strong oxidizer, it is generally toxic, and has been used to treat skin infections. MnO2 can be used as a brown pigment. It is also used in alkaline batteries as an acceptor of electrons from zinc. Manganese fluorides have red luminescence and so can be used to produce red light in LEDs.

Occurrence and Abundance of Manganese 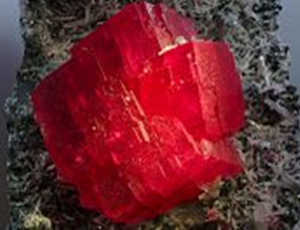 Manganese makes up 0.0008% of the universe. It is the 12th most abundant element in the Earth’s crust and makes up about 0.11% of it. It exists mostly as oxides in the mineral deposits. Pyrolusite contains MnO2 and rhodochrosite is a bright red, crystalline form of MnCO3. The primary countries that have significant manganese deposits are China, Australia, South Africa, Gabon, and Brazil. There are also 500 billion tons of manganese in the form of golf ball-sized nodules on the ocean floor.  Humans are composed of 0.00002% manganese, and it is recommended that adults consume around 2mg of manganese in their diet per day. Good sources of manganese include nuts, beans, grains, vegetables, and fruit. Or, you could just eat some dark chocolate.

Organic compounds that contain manganese are added to gasoline to improve octane ratings. It can be used to neutralize the green color in some forms of glass that is caused by contamination with iron. Over 230,000 tons of manganese are used each year to produce batteries. It is also part of alloys used to make coins. Metal cans also contain small amounts of manganese to prevent corrosion. Manganese oxide is a common component used in cement.

Manganese compounds are common in chemistry laboratories. Their strong oxidizing properties make them ideal in the synthesis of other chemical compounds. Manganese as a dietary supplement can be used to treat various medical conditions. Some people have natural manganese deficiencies. It can also promote bone and joint health and anemia.

Manganese dioxide has been used since the Stone Age as a pigment and in glassmaking. Chemists long knew that the material used for these applications contained an unknown element that they could not isolate. It was not until 1774 that Johan Gottlieb Gahn produced impure manganese metal by reducing it with carbon. However, given its long history, Gahn did not name the element.

Manganese in the Future

High purity manganese is now highly sought for the production of high performance lithium ion batteries that are being developed. It is believed that the enhancements in battery performance will triple the range of electric cars while maintaining the same weight.