Iridium is a transition metal that is the 77th element of the periodic table. It is a very hard, brittle, silvery-white metal. In fact, it is so hard, that its most common use is as a hardening agent in many metal alloys, especially platinum. Because its addition makes metals harder, it’s used to make several different kinds of heavy-duty equipment.

Iridium’s Place in the Periodic Table

Iridium gets its name from the Latin word iris which means rainbow. It goes by this name because many of the salts formed with iridium are highly colored, like a rainbow. Iridium is also classified as a transition metal. It is also part of the platinum family within the transition metals and they are known for being highly resistant to tarnish.

Iridium is a very brittle, silvery metal that can be found in its pure form, or in combination with other platinum group metals in nature. It is the most corrosive resistant metal of the periodic table and the densest. Like most transition metals, it is a good conductor of electricity and heat. The platinum group metals all tend to be relatively unreactive and share physical and chemical properties. Iridium is quite stable, especially at lower temperatures. Iridium is not toxic but can cause eye and throat irritation if humans are exposed to it in dust form. 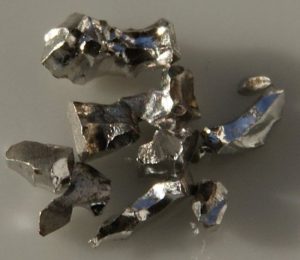 Iridium is the densest element of the periodic table. It is so dense that a cubic centimeter of iridium weighs 22.65 times as much as a cubic centimeter of water. It is also quite brittle when it is cold and nowhere near it’s melting point. The metal needs to be worked at high temperatures otherwise it will break instead of bend.

Iridium is the most corrosion-resistant element known in the periodic table. It’s considered one the noble metals, named after the noble gases which are famously unreactive because of a full outer electron shell. Iridium has more complex outer electrons shells because there are more electrons, but both the 6s and 4f shells are full, and the 5d shell is only missing 3 electrons. Because there is less room for electrons to join, iridium is more unreactive. This also makes it very resistant to air, water, and acids. At higher temperatures, closer to its melting point, iridium can react with oxygen and halogens because their reactivity makes up for how unreactive iridium is.  It can also react with some molten salts at this temperature like sodium cyanide and potassium cyanide. Iridium has 9 valence electrons so there are many oxidation states that can occur. However, iridium prefers not to bond.

Iridium has two known stable isotopes which are 191Ir and 193Ir. They are both found in nature 193Ir at 62.7% abundance and 191Ir at 37.3% abundance.  The two stable isotopes are often used in the production and experimentation of radioisotopes. There are also many known radioisotopes of iridium with one in particular being useful and important; radioisotope 192Ir has a half-life of about 74 days and it is used in X-ray photographs of metal castings and in various cancer treatments.

There are many alloys that can be made with iridium. The most common are iridium-platinum alloys, which are harder than either of the two metals alone. The improved hardness is useful for the jewelry industry as well as for heavy-duty equipment. These alloys tend to have much more platinum than iridium, but another alloy called osmiridium, is predominantly iridium with some osmium. This alloy is found in nature and is harder than either of the two metals alone. It’s mostly used for isolating the metals it’s composed of.

There are few notable compounds with any practical uses so they are rarely discussed. However, there are a couple iridium salts that are very brightly colored and therefore used in coloring ceramics. For example, iridium potassium chloride is dark red, iridium tri-bromide is olive-green, and iridium trichloride can be dark green or blueish black.

Occurrence and Abundance of Iridium

Iridium can be found in nature in its pure form, but is more commonly found in a naturally occurring alloy, osmiridium, which is made of iridium and osmium. Iridium is typically mined from sulfide layers in mafic igneous rocks which tend to have a lot of the platinum group metals. Most of the mining for all platinum group metals, including iridium, occurs in Canada, Russia and South Africa. There is little iridium in the Earth’s crust with about 4×10-8%, but there is more found in meteorites with about 0.000054% abundance. Iridium is not found in oceans or humans.

There are limited uses of iridium and it is most commonly used in its alloy form. For example, platinum-iridium alloys are sometimes used in the jewelry industry, especially for luxury watch backs. This alloy is also commonly used for the spark-plugs of helicopters, electrical contacts, very specific types of electrical wire, and electrodes.

The biggest scientific use of iridium is actually in piecing together the causes of the mass dinosaur extinction. One of the most common theories is that the dinosaurs were wiped out by an asteroid that struck Earth and covered the world with dust so thick it blocked out the sun. Scientists discovered a layer of the Earth’s crust that had an unusually high level of iridium, an element found in much higher abundance on meteorites than the Earth’s crust. Scientists believe this confirms that a large meteorite struck Earth.

Iridium was discovered in 1803 in London by an English chemist named Smithson Tennant. He performed a reaction where he dissolved crude platinum in aqua regia, a very strong acid. This reaction left a residue of iridium. During this reaction, Tennant was also able to isolate another new element called osmium.

Iridium in the Future

Because there are so few practical uses of iridium there is little research being done about the metal. The metal does have some of the catalytic properties that platinum has, so there are some experiments to test this property, but the iridium is so expensive, little will probably come of it.