Copper is a transition metal that is soft, malleable, and ductile. In its pure form, it is metallic, shiny, and orange in appearance. It exists on Earth as a native metal, which means that it can be found in its pure forms. It has properties similar to silver and gold but is much more abundant, making it widely useful for electrical wires and cables, and alloys such as brass and bronze. It is also used in precious alloys of gold and silver for jewelry.

Copper’s Place in the Periodic Table

Copper is found in group 11 and period 4. Other group 11 elements include silver and gold. Copper, silver, and gold all have the highest electrical and thermal conductivities of all of the elements at room temperature. Roentgenium is also in this group but it does not exist in nature and has only been created in labs. Copper has been used by humans for more than 11,000 years. However, the name used today was derived by the Romans, who called it cuprum in Latin. 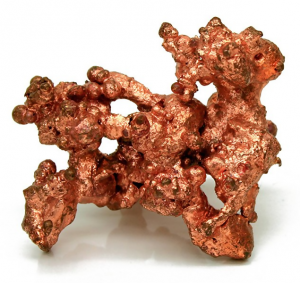 Copper is a soft transition metal. With a shiny orange appearance, it is one of the few metallic elements that has a natural color other than silver or gray. It is malleable and ductile. It has an intermediate atomic radius similar to zinc and nickel. Copper is not very reactive. That is why it can occur in nature as a pure element. It does react slowly with oxygen in the atmosphere, forming a protective oxidized layer that is dark brown.  Copper is an essential trace element for most forms of life so it is not toxic. 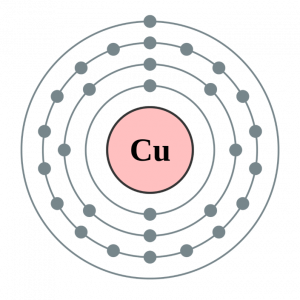 Copper has 1 valence electrons in its 4s shell. It has two common oxidation states that make copper (I) and copper (II) compounds. Copper (III) and copper (IV) can also exist but are very rare. It is stable in water and reacts slowly with atmospheric oxygen.  It commonly forms binary compounds, which are composed of only two elements. These include oxides, sulfides, and halides. Copper also forms compounds with oxyanions, such as nitrate and carbonate. Copper compounds form a variety of colors, including red, blue, green, and turquoise. It has an electronegativity similar to nickel, silver, silicon, cobalt, and iron.

Copper has two natural isotopes. Copper-63 makes up 69% and Copper-65 makes up 31% of copper on Earth. It has 27 synthetic radioactive isotopes that have been generated in laboratories with half-lives ranging from nanoseconds to hours. Radioactive copper isotopes can be used in medicine to treat cancer and to image internal organs.

One of the main uses of copper is to create alloys. When combined with zinc, it forms the alloy known as brass. Copper imparts a higher malleability to the alloy, making it easy to form intricate shapes. That is why brass is the preferred alloy to make musical instruments like trumpets, trombones, and French horns.

Copper is also a principal component of bronze. In human history, the mixture of copper with tin or aluminum marked the Bronze Age, which started around 4000 BC.  Bronze is harder than pure copper, so was used to make weapons and building materials, like axes and nails. It was also used to make sculptures, mirrors, coins, and medals. Precious alloys of gold and silver also use copper to alter the purity of the more expensive elements of gold and silver, and also impart different colors to the alloys. For example, white gold is a mixture of mostly silver and gold. More gold can be added to give a yellow appearance. Or a cheaper alternative is to add copper. Alloys of copper and gold with minimal silver create rose gold. In this case, copper imparts a reddish color to the alloy.

Copper carbonate is a greenish-blue mineral that was used as a pigment in paints. This is also the chemical produced when copper is exposed to the environment for long periods of time. It creates the green surface on architectural features like copper roofs and spires common in historic buildings in the United States and Europe. This specific tarnish is called patina. Copper sulfate is a blue solid that can be used as a pigment in paints and dyes. It is also toxic to fungi and plants, so can be used as a fungicide and herbicide. It can be produced by reacting copper metal with hot sulfuric acid. When used as an electrolyte, electrolysis results in the plating of metal electrodes with copper.

Occurrence and Abundance of Copper

Copper is among the 25-most abundant elements on Earth, making up 0.0068% of the Earth’s crust. It is also among the 30-most abundant elements in the universe, making up 6×10-6 %. Copper can exist as a native element but is also present in a variety of minerals such as azurite, malachite, and turquoise.  It can also be found as a component of carbonate and phosphate minerals. Copper (II) is responsible for the blue and green color in these minerals.

It is a trace element and essential mineral for life, and has an abundance of 0.0001% in humans. In biology, it is often used to transfer electrons in processes that create energy for cells through aerobic respiration of sugars. This occurs by a process called the electron transport chain and it takes place in mitochondria. In this setting, copper atoms go back and forth between +1 and +2 oxidation states, where Cu (II) receives and electron and Cu (I) donates an electron. Chile Is the largest producer of copper in the world, followed by Peru, China, and the United States.

The most common use of copper is to transport electricity. Copper is the second-best metal at conducting electricity, after silver. However, copper is about 1000-times more abundant than silver, so it is cheaper to produce. Copper has a low resistance to the flow of electrons, or electrical current, so very little energy is lost to the production of heat. Copper is also a very good conductor of heat, so it can be used to dissipate heat from electronics and machinery to prevent overheating and fires. Alternators are used in cars to charge batteries and power electrical equipment. Energy from the combustion engine of the vehicle is used to rotate magnets around tightly coiled copper wires. The magnets force the electrons in the copper to move through the wire, creating electrical current.

Copper alloys can kill a variety of pathogenic bacteria. Therefore, hospitals and public spaces are covering surfaces like door knobs and hand rails with copper to limit the spread of infection. Wilson’s disease is a genetic disorder cause by a mutation in an enzyme that regulates the amount of copper in the body. Patients with this mutation have elevated levels of copper, which leads to liver and brain damage. Chemicals known as chelants bind to free metal ions and so are used to remove free copper ions in patients with Wilson’s disease. Alternatively, dietary deficiency in copper can lead to anemia, which is a lack of the protein hemoglobin required by red blood cells to transport oxygen throughout the body. These patients can increase their intake of copper-rich foods like mushrooms, nuts, dried fruit, liver, and shellfish.

Copper has been used by humans for over 11,000 years, so we don’t know who discovered it. The period in history that copper was discovered and used is called the Copper Era or Chalcolithic Era. At this time, copper was used to make tools, weapons, and jewelry. The Copper Era was followed by the Bronze Age (3300-1200 BC). This was a period when alloys of copper were created, improving the strength of the tools and weapons made previously with pure copper.

Copper in the Future

Copper is being researched in the field of medicine to improve the outcomes of surgeries. For example, nanoparticles of copper have been embedded into engineered bone tissue to limit the risk of infection. Copper can also act as a catalyst, and is being researched for its ability to catalyze reactions that remove carbon dioxide from the atmosphere. Since carbon dioxide is the main gas driving global climate change, scientists have proposed the development of technologies that use copper to reduce atmospheric carbon dioxide concentrations.