Strontium is an alkaline earth metal. It is soft, silvery-yellow, and metallic in appearance. It is highly reactive and found on Earth combined with sulfate and carbonate minerals.  Strontium is used in fireworks, toothpaste, x-ray filters, and geology research. Strontium is not an essential element for humans but it has properties similar to calcium, so it is incorporated into growing bones.

Strontium’s Place in the Periodic Table

Alkaline earth metals are found in group 2 of the periodic table. They include beryllium, magnesium, calcium, strontium, and barium, and radium. They all have a similar appearance, electron configuration, and oxidation states. They are called alkaline earth metals because their oxides have a high pH (i.e. basic or alkaline) when dissolved in water. Strontium is named after the Scottish village, Strontian, where its mineral was discovered. 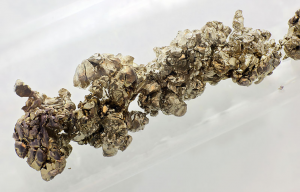 Strontium is a silvery, yellow metal. There are trends down the group two elements, and the characteristics of strontium are somewhere in the middle. This is related to its position on the periodic table in period 5, with 4 elements in higher periods and two elements below.  For example, atomic radius increases down the group, so strontium atoms are larger than calcium but smaller than barium. Ionization energy is the amount of energy required to remove an electron. Elements with higher ionization energies are generally more stable because they require more energy in the form of heat, for example, to release an electron. Ionization energy decreases down group 2, so strontium has an ionization energy intermediate to calcium and barium. The same trend is true for electronegativity.  It is highly reactive and so must be protected from air to prevent corrosion. Strontium is an intermediate conductor of electricity. Its electrical conductivity is similar to rubidium and chromium. Its electrical conductivity is about ten-times less than silver, which is the best conductor of electricity. Strontium is also an intermediate conductor of heat similar to lead and cesium. Its thermal conductivity is about ten-times less than silver, which is the best conductor of heat.

Strontium is solid at room temperature. It melts at 777°C, which is similar to barium and cerium. It vaporizes at 1377°C, which is similar to lithium. It has one of the lowest densities of any metal and elements that are solid at room temperature. Only cesium, beryllium, magnesium, rubidium, calcium, sodium, potassium, and lithium have lower densities. You may notice that all of these elements are found in groups 1 and 2. 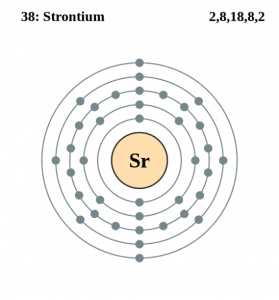 Strontium has 2 valence electrons, filling the 5s orbital. All alkaline earth metals have this valence configuration, which is called divalent (di– means 2).  Therefore, they all commonly bond with other elements at a +2 oxidation state, although others may exist. Strontium reacts vigorously in cold water. Reactions with water form alkaline hydroxides and hydrogen gas. The same reaction occurs for alkali metals, but they form much stronger, corrosive bases. 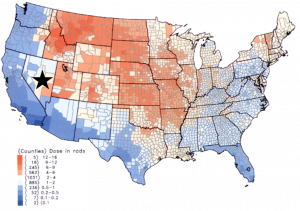 Strontium on Earth is a mixture of four stable isotopes. Strontium-84 is least abundant, having a 0.6% abundance. Strontium-86 and -87 have abundances that range from 10 to 7%. Strontium-88 is the most abundant at 83%. Strontium-90 is a rare element that can be found in nature but it is a contaminant produced during malfunctions of nuclear power plants and nuclear bombs. Nuclear fallout is when these contaminants are released into the atmosphere, where they then get spread across a region, and then begin to settle on the ground. Here is a map of strontium-90 concentrations around the U.S. as a result of nuclear tests conducted in the Nevada desert in the 1950s. As you can see, high levels of Sr-90, in red, spread East across the mid-west from the source in Nevada. Strontium-90 is one of the most dangerous radioactive elements present in the fallout because  it can accumulate in tissues.

There are no major uses for strontium in the production of metal alloys.

Strontium chloride is the compound added to toothpaste to reduce pain. Compounds of strontium and halogens are common. Strontium bromide burns red and is used in safety flares that police use at the scene of car accidents to direct traffic. Strontium bromide and strontium carbonate are used to make glass that filters out specific wavelengths of light, particularly outside of the visible range (e.g. X-rays). Strontium chromate (SrCrO4) is used to coat metals like zinc, magnesium, and aluminum to protect them from corrosion.

Occurrence and Abundance of Strontium

Strontium is among the 20 most abundant elements on Earth, making up 0.036% of the crust. Besides hydrogen and oxygen, which make up 86% of the ocean as water, strontium is the 8th most abundant element dissolved in seawater. Strontium makes up 4×10-6% of the universe, and relative to other elements, is less abundant than it is on Earth. Strontium is reactive, so it exists as mineral salts of sulfate (SrSO4) and carbonate (SrCO3). It is most commonly found in the mineral, celestine. That name is derived from the Latin word for sky or heaven, caelestis¸ which refers to the sky blue color of the mineral. 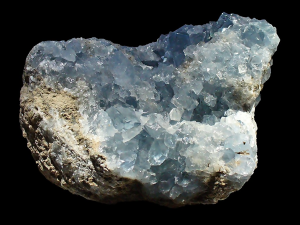 Strontium used to be added to the glass that covered the screens of television sets. The cathode ray tubes used to produce the image on the screen, emit electrons and X-ray radiation. The addition  of strontium to glass makes it an X-ray filter to protect the TV viewers. It is used less often now because most televisions use LED panels that use a fundamentally different technology to produce images. Strontium produces a deep red light when it decomposes under high heat, so it is commonly used to make red fireworks. Do you have sensitive teeth? Toothpaste that contains strontium is sold for people who experience pain when they brush their teeth. It works by blocking microscopic pores in our teeth where nerves are excited to produce the sensation of pain.

Geologists have developed methods that take advantage of the fact that strontium has four natural isotopes. Although we average them together on the periodic table to calculate the atomic mass, they don’t exist everywhere on earth in the same proportions. Geologists use the ratio of the amount of Sr-87 to Sr-86 to determine the source of natural materials that may have traveled or been transported by geological processes. For example, let’s say that the strontium ratio of rocks in your town is 2:1 but the sand at the local beach is 3:1. That would indicate to a geologist that the sand came from somewhere else. It may be the sand was produced by the erosion of a mountain 1000 miles away, was transported by a river, and finally deposited on your local beach.

A common method used to identify the composition of elements in minerals is called flame emission spectroscopy. It is simply the study of light that is absorbed, reflected, or produced by materials. When mineral deposits burn at very high temperatures, they decompose into their individual atoms. Decomposition reactions can release energy in the form of light, heat, or sound. Each element emits a unique color when it’s atoms are released during this process. Strontium produces a crimson red light. This is how the chemists, Adair Crawford and William Cruickshank, discovered it in 1790. The pure element was then isolated by Sir Humphry Davy in 1808.

Strontium in the Future

When we break a bone, it can usually be reset by a doctor and heal on its own. However, in complex fractures and shattered bones, healing is much more challenging. Biomedical engineers are developing many methods to improve treatment options using strontium compounds. Strontium ions are more soluble than calcium, so they have been used to create pastes that glue bone together and that are compatible with calcium that will eventually be used by the body to repair the bone.