Neodymium is a soft, silvery metal within the lanthanide series of elements (elements 57-71). Therefore, it has similar chemical properties to lanthanides. It is a common element on Earth but is not found in its pure form. It is found in phosphate minerals that contain other lanthanides, including cerium, lanthanum, and samarium.   It has five stable isotopes and two radioisotopes that exist in nature. It is used in geology research, magnets, lasers, and colored glass. Neodymium can be hazardous and it has no known biological role in humans.

Neodymium’s Place in the Periodic Table

Neodymium is in period 6 and is grouped with lanthanides, which include scandium, neodymium, lanthanum, and actinium. Lanthanides are named after the element lanthanum – the first in this series of elements.  They all have a similar atomic radius, high electrical resistance and are paramagnetic. It was a difficult element to purify, but could be isolated together with its neighboring element, praseodymium. Together, both elements were referred to as di-dymium (di being the prefix for two). So, when it was later purified, it was named with the Greek words, neo and didymos, which means new twin. 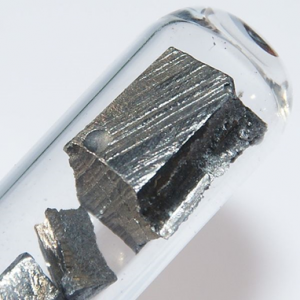 Neodymium is a soft, silvery metal with a shiny luster. In its pure form, it tarnishes slowly with air and reacts with water at room temperature, and reacts rapidly when heated. At 150°C it burns easily in air to form oxides, and in hot water it reacts quickly to form hydroxides. It is one of the most reactive elements within the lanthanide series of elements. It is usually found on Earth in ores with other lanthanides, in minerals known as mischmetals. It is an intermediate conductor of heat and poor conductor of electricity. For example, it has an electrical conductivity 40-times less than copper, and a thermal conductivity about 25-times less than silver. Neodymium is ferromagnetic, which means that, like iron, it maintains a magnetic field after being exposed to another magnet. It is in fact, the strongest known permanent magnet. There is no biological role for neodymium, and it is highly toxic.

Neodymium is solid at room. It melts at 1024°C, which is similar to gold. It has a boiling point of 3074°C, which is close to terbium, which is another metal in the lanthanide series. It has a density close to zinc. 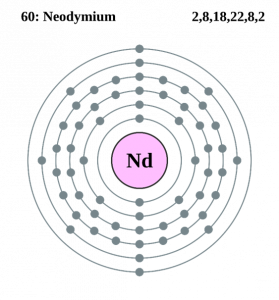 Neodymium has 2 valence electrons that fill the 6s orbital. Therefore, donation of 2 electrons gives an electron configuration equal to xenon. For most elements that means that this would be the most stable electron configuration. However, the most common oxidation state of neodymium is +3. Remember that the orbitals occupied by electrons and their distance from the nucleus can influence the strength of the electrons’ attraction by the positively-charged nucleus. Neodymium has one of the largest atoms of all of the elements on the periodic table. For that reason, its valence shell is far from the nucleus and an additional electron can be taken to form a stable ion with a +3 oxidation state. This is also reflected by its low electronegativity, which means it would prefer to donate electrons rather than receive them through chemical bonding. Therefore, it tends to form bonds with other compounds in nature. It reacts with air to form oxides and water to form hydroxides. It also reacts strongly with gaseous halogens (group 17 elements, such as fluorine, chlorine, and iodine) to form neodymium halides. Neodymium oxide is a weak base.

Neodymium only has seven natural isotopes, including five that are stable and two that are radioactive. The stable isotopes are Nd-142, -143, -145, -146 and -148. The radioactive isotopes are Nd-144 and -150. Both of the natural radioactive isotopes have half-lives longer than the age of the universe. That is why they still exist in nature. Nd-144 decays to form cerium and Nd-150 decays to form samarium. Over thirty other radioisotopes with very short half-lives, from days to seconds, exist. Isotopes of neodymium are used by geologists to predict the age of rocks on Earth and from meteorites.

To take advantage of the strong magnetic properties of neodymium, it is used to create alloys with other elements to make strong permanent magnets. In addition, although pure neodymium is a strong magnet, it only has those properties at very cold temperatures. So, by mixing it with other elements in an alloy, it is possible to obtain the magnetism of neodymium at room temperature. It is usually mixed with iron and boron. These alloys are used widely in electronics, car engines, and wind turbines.

Neodymium-doped yttrium lithium fluoride is a crystal that is used to convert infrared light into visible light. Since neodymium does not occur in a pure form naturally, it must be isolated from chemical compounds. Pure neodymium is commonly produced from the reaction of neodymium chloride with lithium. Lithium is more reactive and gives up its electron more easily than neodymium, so chlorine would prefer to be bound with lithium. Therefore, in this reaction, lithium chloride is formed, which leaves behind pure neodymium. It is possible to predict this outcome because lithium has a lower electronegativity than neodymium.

Occurrence and Abundance of Neodymium

Neodymium makes up .0033 % of the Earth’s crust. That is similar to cobalt and lanthanum, and about 10-times less abundant that sulfur. In the universe as a whole, it makes up 1 x 10-6 % of the universe, which is similar to lead and xenon. Neodymium is most often found with other lanthanide metals that have formed bonds with phosphate molecules. Minerals that contain sources of neodymium include bastnaesite and monzanite (pictured). These minerals commonly contain other lanthanide and rare earth metals, such as cerium, lanthanum, samarium, and yttrium. Neodymium is mined in China, the United States, Brazil, Sri Lanka, and Australia. Neodymium has not been detected in the human body and has no known biological role. 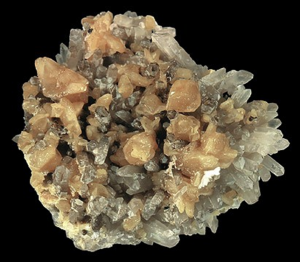 The first use of neodymium was in the production of colored glass. Nd3+ ions impart a transparent reddish-purple color. Today, neodymium is most widely used in magnets. These magnets were developed by the car manufacturer, General Motors (GM). They are used to produce the motors that drive hard drives in computers, cassette tapes, and even electric cars. Likewise, they are used to harness energy in wind turbines.

Neodymium glass is used to make very powerful lasers. When infrared light passes through glass containing neodymium ions, it gains energy to produce green light. We have all heard of nuclear fusion. Nuclear fusion is when nuclei from lighter elements combine to produce heavier elements, such as when two atoms of hydrogen are combined to form helium, and releases energy. We know that this type of energy exists because it is how stars, like the Sun, are fueled. However, this process on Earth remains theoretical and is an active area of research in the field of nuclear physics. Specialized neodymium glass is used to produce higher powered lasers that superheat hydrogen atoms to induce nuclear fusion.

Neodymium was discovered in 1885 by Carl Auer von Welsbach, who was an Austrian chemist. He was able to separate neodymium together with another lanthanide metal, called praseodymium. Together they formed a material known as didymium. He then separated pure neodymium by reacting didymium with nitric acid.

Neodymium in the Future

Research on neodymium continues to improve the uses that are already known, such as enhanced magnets and electrical motors. The demand of neodymium is increasing because of the popularity of hybrid and electric cars, such as the Toyota Prius and Tesla. Therefore, research to find new ways to isolate, recycle, and reduce the amount of neodymium needed to manufacture motors is being conducted. For example, Toyota has developed new magnets that have cut the amount of neodymium in half by replacing it with lanthanum and cerium, which are lanthanide metals with similar properties.