Tellurium is a silver-white metalloid and it is one of the rarest stable elements on Earth. Metalloids have properties that are between metals and non-metals. Tellurium is also a member of the group 16 elements, which are called chalcogens.

Tellurium’s Place in the Periodic Table

Tellurium is a group 16 element in period 5. Group 16 elements are known as and include oxygen, sulfur, selenium, tellurium, and polonium. Chalcogens all have six valence electrons and their electronegativity and reactivity decreases down the group. They often form compounds of [-2] oxidation states to fill their valence shells and obtain noble gas configuration. Tellurium is derived from the Latin word, tellus, which means Earth.

Tellurium is a silvery-white metalloid. It is stable at room temperature and does not react with air. It is brittle and can be pulverized, or broken into a powder. As a metalloid, it has properties between metals and non-metals. Like metals, tellurium has a high melting point and boiling point, is solid at room temperature, has a metallic appearance, and can form alloys. Chemically, metalloids behave more like non-metals and are commonly used as semiconductors. On Earth, it mostly occurs in compounds with gold. However, industrially, it is produced as a byproduct of the purification of copper. Tellurium is diamagnetic, which means that it is repelled by magnetic fields.  It is an intermediate conductor of heat and electricity. It has no known role in human biology and is slightly toxic. 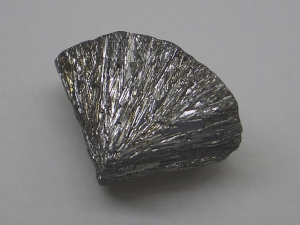 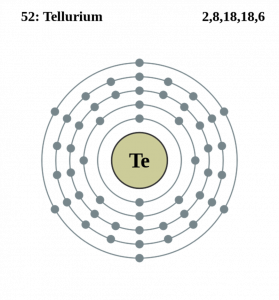 Pure tellurium can be found on Earth but it mostly exists as tellurides. Tellurides are reduced forms of tellurium, meaning that have gained electrons and have a negative oxidation state, like -2. Unlike tellurium, oxygen is a very electronegative chalcogen, that usually exists in the -2 oxidation state. However, sulfur and tellurium are much less electronegative, so they are more flexible in the oxidations states they can adopt. For tellurium, -2, +2, +4, and +6 are common oxidation states. By bonding with halogens, such as chlorine, tellurium can gain the electron configuration of the noble gas, xenon. The +4 oxidation state is the most common. The Te4+ ion has donated 4 electrons, leaving the partially-filled p orbital empty and the valence s-orbital full. Loss of four electrons leaves two in the valence shell. That removes the partially filled p orbital, leaving a more stable configuration of a full s orbital. Tellurium does not react readily when exposed to air, but can form oxides at high temperatures.. It can form dihalides as the Te2+ ions.

Eight isotopes of tellurium exist in nature. Tellurium-120, Te-122, Te-123, Te-124, Te-125, and Te-126 are six of the stable natural isotopes. Te-128 and Te-130 the remaining two natural isotopes. These are unstable and slightly radioactive. Te-128 has the longest known half-life of any of the known radioactive isotopes of any element. Its half-life is 160 trillion years older than the age of the universe. Te-128 makes up 32% of tellurium on Earth. Te-130 also has a very long half-life and makes up 34% of the Earth’s tellurium. Te-126 makes up the majority of the remaining stable isotopes at 19%. Thirty artificial isotopes of tellurium have been generated in laboratories. Bombardment of tellurium isotopes with neutrons is used to produce iodine-131, which is commonly used in medicine for imaging and cancer treatment.

Tellurium is used in alloys of iron, stainless steel, copper, and lead. Adding tellurium to copper and steel alloys makes them easier to manipulate by machinery. Carbon in cast-iron can interfere with tests used to determine the composition of the alloy. In metallurgy, it is necessary to test the compositions of alloys to control their qualities, like strength and durability. Some elements emit a specific color when exposed to a flame or spark. Analysis of the colors of the light emitted from the element can indicate the quantity of each element in an alloy.  Some elements, like the graphite form of carbon can interfere with this type of test. It has been found that tellurium can be added to iron alloys to block interference by graphite, providing more accurate estimates of alloy composition. Cast iron alloys are used to make pipes, car motors, and even your grandmother’s heavy cast iron skillet. Tellurium is added to lead to increase its strength and durability, and to decrease the corrosivity of lead. Lead alloys are used in batteries.

Diphenyl ditelluride is an organic compound that is used in the reduction, or removal of oxygen, of organic compounds. Although unstable, tellurium can replace oxygen in alcoh-ols to produce tellur-ols. Tellurium is not used by many organisms as part of their natural biology. However, a fungus known as Aspergillus fumigatus, can use tellurium instead of sulfur to make amino acids. Amino acids are organic molecules that are joined together in chains, or polymers, to make proteins. Typical glass is made by melting silicon dioxide. However, tellurium dioxide can form a glass when melted.  Silicon is a metalloid like tellurium.

Occurrence and Abundance of Tellurium 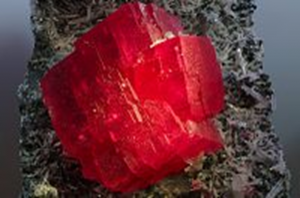 Tellurium makes up 1×10-7 % of the Earth’s crust and 9×10-7 % of the universe. That makes it almost 10-times less abundant on Earth. This is because during the formation of Earth, there was no oxygen in the atmosphere. And because tellurium has a similar electron configuration as oxygen, it reacted with hydrogen gas, which was abundant in the Earth’s atmosphere. Tellurium hydride is volatile, which means it evaporates easily. Therefore, tellurium on Earth was lost as a result of evaporation. The rarity of tellurium on Earth is even more striking when compared to other elements that have similar abundances on Earth and in the Universe. For example, rubidium is 10,000-times more abundant than tellurium on Earth even though tellurium is only about 10-times more abundant in the universe as a whole.

Although rare, there are deposits of pure tellurium in minerals with gold and silver. Even though gold is abundant as a pure element on Earth, tellurium is one of the few elements that can form compounds with gold. Tellurides of gold and silver include AuTe2, Ag3AuTe2, and AgAuTe4. These tellurides are found in the minerals calaverite (pictured), krennerite, petzite, and sylvanite. Because tellurides are so rare, these minerals are not mined for the purpose of isolating tellurium. Instead, about one kilogram of tellurium can be isolated during the purification of copper from about 900,000 kilograms of copper ore. Tellurium is produced mostly in the United States, Peru, Japan, and Canada. Tellurium has not been detected in human tissues and has no known biological role.

Tellurium compounds can be used as pigments in ceramics, and can add shades of blue and brown. Selenium and tellurium, which are both group 16 elements, are added to glass fiber optic cables to improve their clarity. Fiber optics are used to rapidly transmit data across long distances, so improving the clarity of the glass fibers is essential for their use in telecommunications. Tellurium can be added to rubber to increase its hardness and durability. Cadmium telluride is used to make the most efficient solar panels. Tellurium oxides are used in the layers of CDs, DVDs, and Blu-ray discs where data is written and stored.

Neutron bombardment of tellurium is used to produce radioactive iondine-131. Iondine-131 is used in radiation therapy for patients with thyroid cancer. Cadmium telluride combined with zinc produces a sensitive detector X-rays, allowing doctors to reduce the use of disposable film.

Tellurium was discovered in the 18th century in gold ores in Romania. Before it was identified as a distinct element, it was confused with other metalloids, such as antimony. Likewise, it was also confused with other group 16 compounds, such as sulfur in bismuth sulfide. Tellurium was finally named in 1789 by Pál Kitaibel, who was from Hungary and identified the element in the mineral calaverite.

Tellurium in the Future

Tellurium is being researched for use as a thermoelectric material. Thermoelectric materials can convert the energy transferred by the application of heat into electricity. Because tellurium is so rare, engineers are worried that it will quickly be depleted with the expansion of solar energy plants. Scientists are trying to develop new ways to recycle tellurium from used solar panels and electronic equipment to reduce the demand for production of new tellurium.