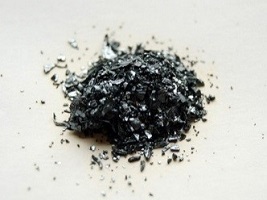 “Iodine-sample” by benjah-bmm27 has been released into the public domain to be used for any purpose.

Iodine is a black, shiny, crystalline solid at room temperature and pressure. It is located on the right side of the periodic table with the other halogens. Iodine is currently used in a wide variety of applications ranging from salts, inks, catalysts, photographic chemicals, and LCD displays.

Iodine’s Place in the Periodic Table

Iodine’s name is derived from the Greek word “iodes,” meaning “violet” because iodine in gaseous form is purple in color.

Iodine is the fourth element in Group 17 of the periodic table, appearing after bromine. Elements in Group 17 are referred to as halogens, a name originating from the Greek root “hal-“ which means “salt.” Iodine is the largest and least electronegative of the stable halogens. In general, atomic size increases within a group because more electron shells (i.e. electrons) are present. The elements below iodine in Group 17 are radioactive and not stable, so they are often not considered for comparisons.

At room temperature elemental iodine is a black, lustrous solid that has a layered structure. In nature it is sometimes found in rock or mineral form, but most often it exists in its anion form, iodide (I–). It is slightly toxic in small amounts, and extremely poisonous in large amounts. Elemental iodine causes sores on the skin, and iodine gas (I2) causes extreme eye irritation. Though iodine is not as reactive as the previous elements in its group (fluorine, chlorine, bromine), it still does form compounds with many other elements and is considered corrosive. Iodine is classified as a solid and nonmetal, though it does display some metallic properties (mainly its lustrous or shiny appearance). Like many nonmetals, iodine is an insulator, so it is a relatively poor conductor of heat and electricity.

Iodine’s visibly layered structure derives from the fact that the solid is composed of layered I2 molecules. The gaseous and dissolved forms of iodine are purple in color. A unique property of iodine is that when heated sufficiently it actually sublimes, meaning it goes straight from a solid phase to a gas phase without becoming a liquid. Iodine has the highest melting and boiling points of the halogens. This is caused by iodine’s relatively large size which results in the strongest van der Waals interactions between the molecules of iodine. Like many nonmetals, solid iodine is very brittle (the opposite of ductile).

Iodine is only slightly soluble in water and results in a yellow solution. However, iodine is quite soluble in chloroform, carbon tetrachloride (CCl4), and carbon disulfide (CS2), resulting in purple solutions. Iodine is not reactive with air or acids, but because it is just one electron short of a full octet, it will react with many different elements in order to fill its outer shell of electrons. This near octet is also what causes iodine to be quite reactive and corrosive. Iodine is not a good conductor of electricity because its electrons are held strongly in covalent bonds (the bonds between two iodine atoms to form a molecule of iodine, I2). Because of its relatively large size, iodine’s electronegativity is the lowest among the halogens.

Iodine has only one naturally-occurring isotope: 127I. Therefore, 127I has a natural abundance of 100%. However, 37 isotopes of iodine exist whose half-lives are known, but most of the half-lives are relatively short because the isotopes are not stable. The radioactive isotope I-131 has been used to treat cancerous thyroid glands. The most stable radioactive isotope that exists is an iodine isotope, I-129. It has a half-life of 15.7 million years!

Because iodine reacts quite readily with most metals and is corrosive, it is not generally used in alloys.

One allotrope of iodine exists: I2 (diiodine). It’s actually the form that iodine takes when it is a gas, and it is an example of a diatomic gas.

Even though iodine is the least reactive halogen, it is still one of the most reactive elements, forming a variety of compounds. Hydrogen iodide (HI) is a gas that reacts with water to yield water and iodine. It doesn’t really have any uses outside of the research lab where it is used in reactions where iodine is intentionally added (iodination) to a molecule.

Iodine oxides are the most stable of the halogen oxides that exist because the I-O bond is so strong (due to a relatively large difference in electronegativity between the O and I atoms). Sodium iodide (NaI) and potassium iodide (KI) are used as nutritional supplements and in chemistry research. Nitrogen triiodide (NI3) is an extremely sensitive and explosive substance. Its extreme reactivity is likely caused by the large amount of strain in the chemical structure caused by having three large iodine atoms being held relatively close to each other by a relatively small nitrogen atom. Due to its extreme sensitivity and inability to control its explosions, NI3 can’t be used for any commercial application.

Thyroxine (C15H11I4NO4) is the iodine-containing compound (it’s actually a hormone) that the thyroid gland inside our bodies produces. Thyroxine is used by nearly all of the body’s systems; it plays a vital role in heart and digestive function, metabolism, brain development, muscle control, and bone maintenance. If a person’s thyroid does not produce enough thyroxine, he or she is said to have a condition called hypothyroidism. One cause of this condition is poor iodine intake since iodine is necessary for the production of thyroxine.

Occurrence and Abundance of Iodine

Iodine is essential for human life, and we need to consume ~0.1 mg of iodide (I–) every day. Approximately 20 mg of iodine exist within our bodies, mostly in the thyroid gland, which helps regulate hormones and body temperature. This equates to a 0.00002% abundance of iodine in the human body. If we don’t get enough iodine from our diet, the thyroid gland will swell, resulting in goiters. However, you likely don’t have to worry about goiters because have you ever noticed the label on the table salt at home? It likely says “iodized salt” because iodine is added to the table salt (NaCl) in order to make sure we do not become deficient in this element.

In nature iodine is commonly found in seawater (in the anion form iodide) in trace amounts (0.000006% abundance), and, accordingly, in seaweed. Historically, seaweed was used as a source of iodine, but now the main source is iodate minerals. Iodate minerals are salt deposits left by the evaporation of ancient seas and salty waters from oil and salt wells. Iodine is mainly produced in Chile and Japan, with some contribution from Russia and the United States. Iodine has only ~0.000049% abundance in the Earth’s crust and 1×10-7% in the universe overall.

Iodine was originally used for photography in the production of daguerreotypes which were invented by Louis Daguerre in 1839. Today, we use iodine for several commercial applications. Iodine salts are used in pharmaceuticals and disinfectants. Have you ever seen a yellow solution used as a disinfectant? This is called “tincture of iodine” and gets its yellow color and antiseptic properties from the iodine it contains. It is also used in inks and dyes due to its rich color as well as in human and animal supplements (since it is needed for proper biological function). Finally, it has been used in the polarizing filters of LCD displays.

In the lab, iodine is primarily used as a catalyst (species used to drive a reaction). It is also used in medicine as an internal contrasting agent for imaging techniques, radiography, and fluoroscopy.

Though he nearly lost his claim to fame, Bernard Courtois is the French chemist credited with the discovery of iodine in 1811. He performed experiments using seaweed to produce potassium nitrate (KNO3), an important component of gunpowder being used for the Napoleonic Wars at the time. He added too much sulfuric acid to his product one day and saw purple fumes (remember iodine gas is purple!) which then condensed to form solid, shiny crystals. Courtois had a feeling that these crystals were a new element but didn’t have funding to further study the substance. Therefore, he gave samples of his product to several friends and other chemists, and of those people, Joseph Gay-Lussac and Humphry Davy both independently declared that this was a new element. In fact, Davy sent a letter to the Royal Society of London stating that he had identified (not discovered) a new element, which caused him to mistakenly be named the discoverer. For more than 50 years people thought Davy had discovered iodine before properly attributing credit to Courtois.

Iodine in the Future

Going forward, uses of iodine in medicine will continue to be studied and implemented, particularly related to cancer treatment and diagnoses. It will continue to be used in supplements to prevent and treat iodine deficiency in humans and animals, as studies have shown that iodine deficiency in adults is still a common problem (affecting approximately two billion people worldwide), just usually not to the extent that goiters form. This has been caused in large part by salt companies not adding sufficient iodine to their product and people cutting salt from their diets for other health reasons.