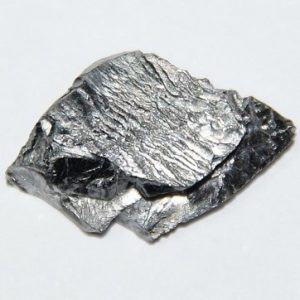 “Tantalum” by Jurii has not been altered and is licensed under CC Attribution 3.0 Unported.

At room temperature and pressure, tantalum is a shiny, silvery metal.  It is a transition metal and is therefore located with the other transition metals in the middle of the periodic table (the d-block). Tantalum is used in electronics, surgical implants, and applications that require resistance to corrosion.

Tantalum’s Place in the Periodic Table

Tantalum is named after King Tantalus, a figure in Greek mythology.

Tantalum is the third element in Group 5 of the periodic table. Group 5 elements are part of the larger transition metal group. The first three elements of Group 5 (vanadium, niobium, and tantalum) are found naturally, but dubnium is not (it has only been synthesized in the lab). The first three elements are all very reactive (but tend to rapidly form oxidation layers, preventing further reaction), have high melting points, and form various inorganic compounds.

Tantalum is a shiny, dense, ductile metal. In nature it can very rarely be found alone. Most often it is found as part of rock minerals. One reason tantalum is very useful is because of its resistance to corrosion. It is considered non-toxic.

Tantalum is a very reactive metal, but, like the other Group 5 metals and many other metals, it does quickly react with air or oxygen to form a stable oxide layer, which prevents it from reacting further. Tantalum is classified as a transition metal. All transition metals conduct heat and electricity, and tantalum is an excellent conductor.

At room temperature and pressure, tantalum is a dense, silver metal. It is highly ductile and can be drawn into a thin wire. Tantalum is one of five “refractory metals,” a group of metals named for their high resistance to heat and wear. (The others are tungsten, molybdenum, rhenium, and niobium.) Accordingly, tantalum has an extremely high melting point that is only beat by tungsten, rhenium, osmium, and carbon.

As has been alluded to, tantalum is in a class of metals which is very reactive. However, this reactivity often goes unnoticed, and it is more known for its resistance to corrosion. This is because, upon exposure to air or oxygen, the outermost layer of tantalum metal immediately reacts with the oxygen to form a thin tantalum oxide layer. This oxide layer is very stable and unreactive, passivating the metal from reacting any further. It is especially known for its resistance to corrosion by acids, including extremely strong acid aqua regia. Like all transition metals, its outer electron shell starts to fill with electrons before the inner shell is completely full, which allows it to form bonds using electrons from more than one of its electron shells. So tantalum has three electrons in a level five electron shell, and two electrons in a level six electron shell even though the fifth shell still needs three more electrons before it is full. Overall, tantalum has very similar chemical properties to niobium.

Naturally-occurring tantalum is composed of two stable isotopes: 180Ta and 181Ta. 180Ta has a natural abundance of 0.012%, and 181Ta has a much higher abundance of 99.988%. Approximately 30 other synthetic isotopes of tantalum exist. Three of them have half-lives on the scale of hours, while 182Ta and 183Ta have half-lives of 114.4 days and 5.1 days, respectively. 181Ta and 182Ta are being hypothetically considered for their ability to intensify the damage caused by nuclear weapons by prolonging the radioactivity of a nuclear explosion.

Tantalum’s high melting point, resistance to corrosion, and ductility make it ideal for use in alloys. In fact, it is combined with other metals to make superalloys for jet engines, chemical manufacturing equipment, nuclear reactors, tanks, turbine blades, rocket nozzles and nose caps for supersonic aircraft, and missiles. Superalloys are alloys that have superior qualities like extremely high mechanical strength, resistance to corrosion, and thermal stability. Because tantalum is resistant to corrosion in most acids, its alloys are used in chemical reaction vessels and pipes for corrosive liquids in industrial chemical manufacturing.

No allotropes of tantalum exist.

Occurrence and Abundance of Tantalum

Tantalum has no known biological role and is therefore not found within the human body (except for tantalum-containing surgical implants, of course, which are used because tantalum is not biologically active). On Earth, tantalum is rarely found alone but more often found as part of a mineral. Usually it is found as part of the mineral columbite-tantalite. As a relatively rare element, its abundance is only 0.00017% in the Earth’s crust and 8×10-9% in the universe overall.

The top producers of tantalum are Brazil, Rwanda, and China, though it is also mined in Australia, Canada, and Brazil. Tantalum usually has to be separated from niobium, which is a complicated process (you’ll learn a little more about tantalum and niobium’s affinity for each other and how their separation can be difficult in the section about tantalum’s discovery). Commercially, tantalum is usually produced as a by-product of tin extraction. 70,000 metric tons of tantalum ore are produced each year.

The main use of tantalum is for the production of electronic components. Because of the oxide layer that forms on its surface, which is insulating, tantalum performs as a very good capacitor. To harness this characteristic, tantalum is used to coat other metals so that a high capacitance (a lot of charge can be built up) can be achieved in a small area or volume. As you can imagine, this is very useful for compact devices like cell phones, laptops, electronic components in cars, and cameras.

Aside from tantalum’s alloys’ use in aircraft design and chemical manufacturing, tantalum also has surgical applications. Because human (and other mammal) bodies don’t have an immune reaction to tantalum, and tantalum doesn’t react with bodily fluids, it is used very widely in surgical implants. Larger pieces of the metal can be used to replace bone, foils and wire (thank you ductility!) made out of tantalum can connect torn nerves, and woven gauze can bind abdominal muscles together. It is also used in dental implants.

Anders Gustav Ekeberg of Sweden is credited with the discovery of tantalum in 1802. He identified it within mineral samples found in Sweden and Finland. However, English chemist William Hyde Wollaston compared the oxide of niobium (then called columbium) with the oxide of tantalum and deemed them the same element, even though he knew the two oxides had wildly different densities. (Sounds like someone needed to go back and repeat sophomore chemistry, right?) Friedrich Wohler confirmed Wollaston’s results, so they were accepted until 1846 when German chemist Heinrich Rose disputed them. He thought that the oxide of tantalum contained two other elements, and he was almost correct. The oxides that were being studied contained a mixture of tantalum and niobium. Rose identified a third supposed element which he called pelopium, but that was actually just a mixture of tantalum and niobium. It was then that chemists realized niobium had been identified back in 1801 and had been called columbium.

In 1864, Christian Wilhelm Blomstrand, Henri Etienne Sainte-Claire Deville, and Louis J. Troost did some fundamental studies to prove, without a doubt, that tantalum and niobium were different. In 1866, Swiss chemist Jean Charles Galissard de Marignac also did work to show that only two elements existed within this ordeal. Through all of this proof that only two elements existed, other scientists still proceeded to publish about a so-called element named “ilmenium” until 1871. De Marignac produced the metallic form of tantalum (as opposed to impure tantalum) for the first time in 1864.

Tantalum in the Future

As of 2018, tantalum is being considered and stockpiled to be used in capacitors in more mainstream applications because there is an extreme shortage in the capacitors that are typically used (MLCC – multilayered ceramic chip capacitors).

Related to this expected increase in demand for tantalum is the worry that production of “conflict tantalum” in Central Africa will also increase. The U.S. has started to require companies to document exactly where their tantalum materials are sourced, which is actually difficult to trace, but it has allegedly been helping to cut down on the illegal activity related to tantalum mining that had been occurring in Rwanda and the Democratic Republic of the Congo.