Mercury is the 80th element on the periodic table and is denoted by the symbol Hg. Mercury is a d-block element, making it a metal; however, mercury has the extremely unique property of being the only metal to exist in a liquid state at STP (standard temp. and pressure). Mercury has a shiny silver appearance and has been used historically for a wide variety of things, but due to its toxicity its use has seen some decline. It still is however, quite an important element in modern scientific research and other commercial functions.

Mercury’s Place in the Periodic Table

Mercury’s chemical symbol of Hg comes from its root in Greek culture. The element’s previous name was hydrargyrum, and this Latinized Greek word translates to “water-silver”. It was from this name that Hg was derived. Every single one of Mercury’s neighbors on the periodic table are metals; strong, solid, metals. However, mercury has the strange characteristic of being a liquid at STP, making it really stand out from its neighbors.

Mercury has a very strange feel to it. It is extremely dense, meaning that it is quite heavy and behaves a bit differently than other liquids. Mercury is also a rare element, and is nearly never found by itself in pure liquid state. When it is found, it is found in the form of compounds inside of certain rocks. Mercury itself does not corrode; however, it can be used to melt many other elements including gold and silver. 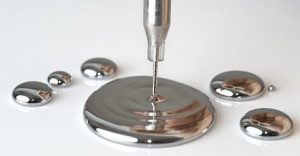 Mercury in Liquid Form by Fotalia/marcel is licensed under CC BY 2.0

As far as metals go, mercury is a poor conductor of heat. This is not a surprise though as liquids are generally awful at holding heat. But in contrast to this, mercury does well with conducting electricity. Mercury is a generally stable element with 7 stable isotopes. Mercury has been used historically in quite a large number of ways. This use has begun to decline rapidly however, as we now know that mercury poisoning is quite dangerous and easy to be inflicted by. Even a small amount of ingested mercury can cause very serious health issues including damage to the brain, kidneys, and lungs.

Mercury is the only element located in the metals group that stands as a liquid at room temperature. Because of this, mercury also has the lowest melting, boiling, and freezing point of any stable metal. When frozen, mercury is also so malleable that it can be cut with a knife. The reason mercury is a liquid at room temperature has to do with its electron configuration. It has an extremely strong affinity for keeping its electrons, therefore making it behave as a noble gas. Mercury has received the nicknames liquid silver and quicksilver for its shiny metallic grey-white color and was used in part for its beauty throughout history.

Since mercury tends to behave as a noble gas, it is actually quite reactive. Mercury will generally aptly and quickly form weak bonds. Mercury does not quickly react with many acids, but can be dissolved by concentrated sulfuric or nitric acid. When dissolved, mercury gives off sulfate, nitrate, and chloride. Another applicable reaction with mercury is through the use of sulfur flakes. These flakes can actually be used as part of a mercury spill kit to absorb spilled mercury. Mercury can be used quite readily to dissolve other metals including gold and silver. When dissolved with mercury amalgams are formed. Amalgams are alloys of mercury mixed with another element. The stability of mercury comes from its filled 4f shell. This shell acts as a weak barrier for the 6s shell. This increases the Coulomb interactions of the nucleus and that 6s shell. Mercury is moderately electronegative with an EN value of 2.0 on the Pauling scale. This adds to its reactivity.

The most notable alloys of mercury are called amalgams. These are created when mercury is combined with another metal. The most common mixtures are with iron, platinum, tungsten, and tantalum. These alloys have seen extensive use in the field of dentistry. They are used as fillings and other restorative dentistry apparatuses. They are used primarily for their restorative properties and inexpensiveness. Other amalgams, such as zinc and potassium amalgams, are used as standards in electrochemistry. Mercury amalgams can be created with nearly any metal and vary in strength and phase as the amount of mercury used is also varied. More mercury would create a more liquid or paste like substance.

Mercury is found in two different oxidation states, mercury (l) and mercury (ll). Mercury (l) is excellent at forming simple metal-metal bonds. This is quite contrary to its neighbors on the periodic table. One of the most important compounds is mercury (l) chloride (Hg2Cl2). This is a colorless solid known as calomel. This compound is used as a standard in electrochemistry and is used to react with chlorine to give mercuric chloride.

Mercury (ll) is the most common state of oxidation for mercury. It often forms tetrahedral complexes similar to gold. The most common and well known of these complexes is mercury(ll) chloride. This is a white, easily sublimated, solid. Mercury (ll) oxide occurs when the metal is exposed to oxygen for too long. This can be easily reverted by heating the compound however and was actually used as a process for obtaining pure oxygen in the past. Mercury (ll) salts also saw extensive use historically but are commercially and practically unimportant in today’s society.

Occurrence and Abundance of Mercury

Mercury is a quite rare element in the earth’s crust. In ppm, mercury makes up only 0.08ppm of the earth’s crust. Mercury also has another interesting feature in nature. It is generally found in rather concentrated masses, rather than equally spread out. This is due to mercury’s inability to bond with the majority of elements that make up the earths crust.

Mercury is very rarely found in native metal form. More likely, it will be found as cinnabar, metacinnabar, corderoite, livingstonite, or other minerals. To compliment this, mercury is generally found near places with very young, or hot, rocks, such as orogenic belts like hot springs or volcanic regions. Mercury has been a valuable and used element since the ancient Egyptians, but, in 1558 mercury began to see widespread use in the patio process. This process was developed to remove silver from other ores. With this process mercury became hugely important in Spain and their American colonies.

For many years the majority of mercury was mined in southern Spain; however, mines quickly popped up in places like Peru and New Spain. This boom in mercury continued with more than 100,000 tons being mined in Peru alone and this process of removing silver stayed economically important all the way until the 19th century. Today, many mines from Italy, The US, and Peru have run dry, leaving the price of mercury to fluctuate wildly. China is the worlds largest producer of mercury today and is followed by Kyrgyzstan. With the advent of the fluorescent lightbulb (which requires mercury to build) mercury mines have begun to see a bit of resurgence. In the universe, mercury makes up 1×10-7% of all elements.

Historically, mercury was used for a great number of things. In ancient Asia, mercury was believed to be an all-purpose type medicine. Mercury was used to attempt to prolong life, heal broken or fractured bones, and to be an overall good health promoter. There is a famous story in which the first emperor of China, Quin Shi Huang Di, was given an elixir of mercury to attempt to make him live forever. He was given this mercury and jade mixture quite often and studies suggest he died of liver failure. In his tomb, flowing mercury rivers were found. It was also quite often that ancient royal maps would have the water portions filled in with mercury. The ancient Greeks would also use mercury to make certain ointments.

Mercury has been used for over a thousand years in the creation of different medicines and elixirs.  Though well meaning, most of these proved to be more harmful then helpful. The uniqueness of the element made it seem lovely and extravagant, leading people to wrongly assume it was good for you. Mercury poisoning has led to the deaths of monarchs and peasants alike.

In more modern times mercury has been used for some medical technologies. For example, older style thermometers would use mercury. Mercury was also a staple in many medicines years ago. Mercury could be found in everything from pain killers to cold relief medicines. As mentioned earlier, mercury was most prominently used in dentistry though. Thiomersal is a vaccine preservative that is made from mercury, although the use of this compound has seen decline in recent decades. Mercury can also still be found in some antiseptics and oral medications today, but that is primarily in developing nations. It has been weeded out of most medicines and medical equipment, and many other areas which once used mercury have since moved on. Mercury is found in many ancient Chinese medicines still used today, though people have been warned of its harmful effects.

Mercury Metal Poisoning by Delloyd’s Chemistry Resources is licensed under CC BY 2.0

Today, mercury is used primarily for only a few things. Mercury is used in the production of fluorescent lightbulbs. It can also be used for very niche things such as small neon lights and in some types of spectroscopy. Last, mercury can still be found in many makeups, however this is in very small quantities. Minnesota became the first state to ban intentional mercury additives in 2008.

High levels of mercury can also be found in fish, there is an exceptional concern with tuna. Mercury levels move up the food chain starting from the plankton who consume small amounts of mercury runoff from mines or other production facilities. The plankton are then consumed in large amounts by bigger fish, who are then again consumed. This leads to a large concentration of mercury in certain types of fish. This is why it can be dangerous to eat canned tuna rather often. Mercury has become quite controlled in recent years due to its toxicity.  Also, about half of the mercury emission on earth comes from volcanoes, so there is unfortunately not much we can do about that.

Today, mercury also has some uses in the sciences. First, it is used to produce liquid mirror and transit telescopes. These telescopes use the reflective properties of mercury to their advantage. Second, mercury sees great use in electrochemistry. It is used extensively as an electrode. An electrode is the part of a circuit in which a conductor makes contact with a non-metal section of a circuit. The mercury electrode is particularly used to determine the electrode potential of half cells. Another way in which mercury is used is as a standard. The triple point of mercury (the temp. and pressure in which all three phases of an element coexist) is -38.8344C and is used as a standard in the international temperature scale.

The actual date or place for the discovery of mercury is unknown but it has been found in Egyptian tombs that date all the way back to 1500BC. Mercury was used by nearly every ancient civilization for a variety of things. Nearly every ancient society believed that it held some type of healing property and was seen to be extravagant for its rareness and beauty. Alchemists believed that mercury was the first matter, which means they believed that mercury was the element from which all metals had their origin.

Mercury in the Future

Mercury will continue to be an important element in certain fields of chemistry. However, it will most likely continue to be weeded out of nearly all aspects of general use. Once developing nations catch up a bit, mercury in medicine will most likely be nearly non-existent, and the same goes for mercury batteries, thermometers, pressure gauges, etc.