Nickel is the 28th element of the periodic table and is classified as a transition metal. In its pure form, nickel is a silvery-white metal that is very shiny and can have a slight golden tinge. Nickel is commonly used to plate other metals and protect them from corrosion, and is found in many alloys such as stainless steel.

Nickel’s Place in the Periodic Table

It is believed that nickel got its name from a character of German miner mythology. A mischievous sprite named Nickel was thought to personify the fact that copper-nickel ores resisted refinement into copper. Nickel is a transition metal in group 10, and group 10 elements tend to all be very shiny and resistant to tarnish.

Nickel is a hard, shiny metal that is most commonly found in ores that look like dull grey rocks. It is resistant to corrosion and very stable in its pure form. It is classified as a transition metal and shares a lot of similar properties with its groupmates like malleability and conductivity. However, while it can conduct heat and electricity, it is not a very efficient conductor, so usually other transition metals are used if these properties are important. Inhaling nickel can lead to agitation of the lungs and naval cavity, but this is rarely a concern. There are certain people who can have mild skin irritation with nickel exposure as well.

Nickel is relatively unreactive, especially at lower temperatures. It will not react with air or water at room temperature and is resistant to most acids and basic solutions. At higher temperatures, nickel will dissolve slowly in acidic solutions. Nickel can also form a thin coating of nickel (II) oxide which stops corrosion from progressing. It is quite stable and will bond but not readily. Nickel’s relatively low electronegativity contributes to it not bonding frequently.

Nickel has 5 stable isotopes: 58Ni, 60Ni, 61Ni, 62Ni, and 64Ni. The most abundant are 58Ni at around 68% abundance and 60Ni at around 26% abundance. The other isotopes are far less common with 61Ni and 64Ni being around 1% abundance each, and 62Ni being around 3.6% abundance. There are over 25 different known radioisotopes. Most of the stable isotopes have been used to study human absorption of nickel and 60Ni is used for the production of cobalt isotopes that are necessary for bone densitometry.

While stainless steel is definitely the most well-known alloy of nickel, there are many other alloys that serve other purposes as well. For example, nickel-chromium alloys that contain at least 15% chromium are very heat-resistant and are used to provide oxidation and carburization resistance at high temperatures. Nickel-copper alloys are commonly used in nuclear submarines because it does well in sea water. Nickel is also commonly mixed with iron (stainless steel is an example) and molybdenum to a lesser extent.

While nickel is more commonly found in alloy form, there are also several compounds of nickel that are important as well. For example, nickel (Ii) sulfate (NiSO4) is a bright blue salt that is an important source of nickel ions which are needed for electroplating. There is also nickel (II) carbonate (NiCO3) which is a light green salt that can be used as a catalyst. It is most common for nickel to have an oxidation state of +2 so many of its compounds utilize that form.

Occurrence and Abundance of Nickel

Nickel is mined in many parts of the world but it is most commonly mined in Russia, Canada, Australia, Indonesia, China and South Africa. Nickel is commonly found in various ores such as pentlandite, garnierite, and limonite, but it can also be found in its pure form in small amounts. Nickel is quite abundant in the Earth’s crust making up 0.009%. It is also common in meteorites with 1.3% abundance and in the Sun at 0.008% abundance. 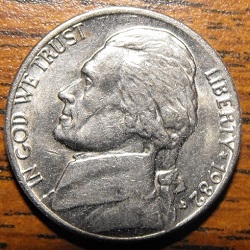 There are many uses of nickel that are quite common in people’s everyday life. For example, nickel is a component of stainless steel, which is commonly found in kitchen appliances and nickel contributes the property of malleability to this alloy. Other uses for stainless steel include armored plating, boat propellers and turbine blades. Nickel is also used in regular batteries as well as rechargeable batteries and the batteries of hybrid cars. Lastly, nickel is used to form the American coin called the nickel. It is made of 25% nickel and 75% copper.

Nickel, or at least nickel-containing alloys, have been used for over thousands of years. However, the element was first classified and isolated in 1751 by a Swedish chemist named Axel Fredrik Cronstedt. He originally mistook the ore he was working with as a copper mineral, but was eventually able to isolate the element.

Nickel in the Future

There was a study done in 2017 that confirmed that 78Ni, a non-naturally occurring isotope of nickel, is exceptionally stable. Physicists were running various tests on the isotope using Titan, the most powerful supercomputer in the US. The isotope is incredibly hard to produce, but these studies could shed some light on the understanding of matter’s stability.