Hydrogen is the simplest element that exists, and, accordingly, is the first element in the periodic table, sitting in the top left corner. Hydrogen exists at room temperature as a colorless, odorless gas. It is used for clean energy applications as well as in the chemical, food, glass, and electronics industries. It’s no problem that we’ve come to use hydrogen for so many things because it is the most abundant element in the universe. We don’t have to worry about running out of hydrogen!

Hydrogen’s Place in the Periodic Table 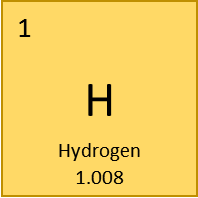 In Greek, hydrogen means “water forming,” which is an appropriate name given that water is formed when hydrogen and oxygen combine. The French chemist Antoine Lavoisier gave hydrogen its name after this discovery was made by Henry Cavendish.

In its gaseous form, hydrogen doesn’t look like anything because you can’t see it! In fact, none of your senses can identify it when it’s isolated. It is colorless, odorless, and tasteless. At standard temperature and pressure (STP), hydrogen exists as a diatomic gas, where two atoms of hydrogen combine to form the molecule H2. Under extreme temperatures and pressures, hydrogen can exist as a liquid or solid. Hydrogen can also be found in water and in all the molecules that make up living things.

Though hydrogen is completely non-toxic, it does pose safety risks in another way. Hydrogen gas is very flammable, but when it burns, the flame is invisible. It also reacts explosively with oxygen gas and produces water in the process . Watch the scene here:

This high reactivity is due to the fact that a single atom of hydrogen is not stable and needs to bond to another atom quickly. When in the diatomic gas form, though, it is very stable.

Hydrogen’s classification is very unique. Though hydrogen is grouped with the alkali metals, it is actually classified as a nonmetal. Like other nonmetals, hydrogen holds onto its electrons tightly, so it conducts heat and electricity very poorly. Hydrogen forms a cation (loses an electron) more reluctantly than the other alkali metals. When it does ionize and form a cation, though, it behaves similarly to the alkali metals and combines with atoms that tend to ionize to form anions. However, hydrogen can also combine with atoms that become cations very easily (lose electrons easily). In this case, hydrogen behaves like a halogen and results in the formation of a hydride.

Hydrogen has three isotopes: 1H (hydrogen aka protium), 2H (deuterium), and 3H (tritium). Protium and deuterium have natural abundances of 99.9885% and 0.0115%, respectively. Tritium only occurs in trace amounts in nature. Both protium and deuterium are stable isotopes, but tritium has a half-life of approximately 12.3 years (i.e. half of a given amount of tritium will decay in 12.3 years). Deuterium and tritium are used for isotope labeling studies and as fuels for nuclear fusion. “Heavy water” made from deuterium (D2O) is also used in various nuclear energy research.

The main hydrogen-containing alloy is iron-hydrogen (iron hydride). This substance is of interest to planetary geology researchers because it may exist in the Earth’s core (a place with very high temperature and pressure). The iron-hydrogen alloy can only be studied in a hydrogen-containing environment because as soon as the iron is removed from the hydrogen atmosphere, the hydrogen leaves the system to form hydrogen gas, usually leaving the iron very brittle.

A class of hydrogen storage alloys is up-and-coming for use in rechargeable batteries and fuel cells. These alloys are often made of two different metals that have the unique ability to cycle between absorbing and releasing hydrogen. This is a very similar concept to that used in lithium ion batteries (because hydrogen and lithium are both in Group 1 of the Periodic Table), which most electronics depend on nowadays.

Occurrence and Abundance of Hydrogen

Most hydrogen on Earth is found in water, and its presence as a gas in our atmosphere is actually quite small (~1 part per million by volume). Because hydrogen is so small and lightweight, it tends to float to outer space rather than remain in Earth’s atmosphere, but it can be sequestered deep underground. Its abundance in the Earth’s crust is 0.15%. Hydrogen also exists within the molecules of most living things on Earth. Do you know how much hydrogen exists within you right now? It makes up approximately 10% of the human body by mass.

What about beyond Earth, though? Hydrogen is actually the most abundant element in the entire universe, accounting for 75% of matter by mass! The sun and other stars are made mostly of hydrogen, and the same is true of giant planets like Jupiter and Saturn. Not bad for little, old hydrogen, huh?

Hydrogen is important commercially for the production of ammonia, a commonly used fertilizer in the agricultural industry. In this process, known as the Haber process, hydrogen is combined with nitrogen. It’s used in the chemical industries to make plastics and pharmaceuticals, and it is also used in the oil-refining process. If you consume hydrogenated oils and fats, like margarine, you have hydrogen to thank for that. Hydrogen has also become increasingly popular due to its ability to be used as a clean fuel. Hydrogen-powered fuel cell vehicles only produce water, rather than a medley of pollutants, from the tailpipe. However, because most hydrogen is produced from natural gas, producing carbon dioxide along the way, whether or not using hydrogen as a fuel is truly “clean” has become a debated issue.

Hydrogen is used for various purposes in scientific research, including further development of hydrogen fuel cells, solar water splitting studies (the cleanest way to produce hydrogen), and superconductor studies (materials that conduct electricity with zero resistance when cooled to extremely low temperatures). Typically, high-purity (>99.99%) hydrogen is used for scientific research. Deuterium, an isotope of hydrogen, is used in nuclear fission and fusion research as well as for isotope labeling studies.

Though hydrogen has basically existed forever, the person we have to thank for putting in the effort to discover and characterize hydrogen in 1766 is Henry Cavendish. Though Paracelsus (in the 1500s) and Robert Boyle (in 1671) both observed hydrogen gas in their studies, neither spent time to characterize or study it, leaving room for Cavendish’s claim to fame. Cavendish performed experiments to collect the hydrogen gas and then demonstrated that it was indeed different from other gases that had been previously discovered. He also showed that when burned, hydrogen forms water, prompting Antoine Lavoisier to give hydrogen its name, which means “water forming.” The discovery that water was composed of several elements was actually very important because prior to this, people believed water itself was an element.

Hydrogen in the Future

Future plans for hydrogen center around its use in fuel cell vehicles and as an energy carrier in general. If cleaner and cheaper methods of hydrogen production can be developed, hydrogen will be able to compete as an alternative fuel.