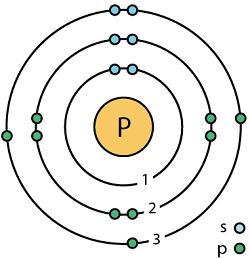 “15 phosphorus (P) Bohr model” by Aharzard.sciencewriter has not been altered and is licensed under CC Attribution-Share Alike 4.0 International.

Phosphorus is a white solid at room temperature and pressure. It is located on the right side of the periodic table, near the other nonmetals. Phosphorus is primarily used for flammable and explosive applications (like matches and ammunition) and for fertilizers.

Phosphorus’s Place in the Periodic Table

Phosphorus’s name is derived from the Greek word “phosphoros,” meaning “bringer of light.” In fact, in Ancient Greece, Phosphorus was the name for the planet Venus.

Phosphorus is the second element in Group 15 of the periodic table, appearing after nitrogen. Elements in Group 15 are referred to as pnictogens (meaning “to choke”) due to their asphyxiating properties.

At room temperature elemental phosphorus is a white (yet transparent), waxy solid that is poisonous (severely toxic) and will cause severe burns if contact with skin is made. It gives off unpleasant fumes. Phosphorus is very reactive, and when exposed to air, will spontaneously burst into flames. In the presence of oxygen, it actually emits a weak green glow, something called chemiluminescence.

Phosphorus does not occur as a free element in nature, because it is so reactive, but it can be found in many minerals, like calcium phosphate. Phosphorus is classified as a solid and nonmetal. Like many nonmetals, phosphorus is a relatively poor conductor of heat and electricity.

At room temperature and pressure, phosphorus exists as a transparent white-yellow solid with a strong odor. Red and black phosphorus also exist. 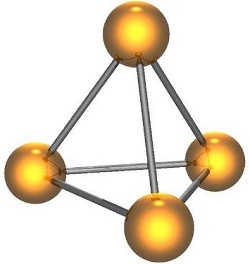 “White phosphorus molecule” by Cadmium has been released into the public domain to be used for any purpose.

Phosphorus is quite reactive. It self-ignites (pyrophoric) when exposed to air and produces pentoxide (P4O20). Its high reactivity (low stability) stems from the fact that the P-P bonds are relatively weak, and in elemental phosphorus (P4), the bond angles are highly strained (60°) (see image below). This strain can be alleviated by breaking of P-P bonds to form other, more favorable bonds, which is what happens when phosphorus reacts with other compounds or elements. Phosphorus is insoluble in water but soluble in carbon disulfide (CS2). When exposed to oxygen, phosphorus emits a green glow (chemiluminescence). This is due to a reaction between the surface of the phosphorus and oxygen to form HPO and P2O2, two short-lived molecules that emit visible light. Additionally, white phosphorus is not stable and slowly converts to red phosphorus over time. Phosphorus is not a good conductor of electricity because its electrons are held strongly in covalent bonds. The only exception is black phosphorus, which has a structure similar to graphite, allowing it to conduct electricity like graphite.

Phosphorus has only one naturally-occurring isotope: 31P. Therefore, 31P has a natural abundance of 100%. However, 23 isotopes of phosphorus exist whose half-lives are known, but the half-lives are relatively short because the isotopes are not stable.

Phosphorus can be alloyed with iron-based metals in order to limit corrosion of the metal. Nickel phosphorus alloys are used in gas turbines and jet engines because of their improved resistance to corrosion. A phosphorus copper alloy is used in the chemical production industry (as an agent that aids various processes) and aluminum production industry (as a nucleant, or place where the reaction kickstarts). Phosphor bronze is an alloy of copper, tin, and phosphorus. It is used in situations where resistance to wear and corrosion are required (e.g. ship propellers). It is also used to craft brass instruments and cymbals.

The most notable phosphorus-containing compounds are derivatives of phosphate (PO43-). As phosphate, phosphorus is a component of DNA, RNA, and ATP as well as the phospholipids that form all cell membranes. Phosphorus is also in the phosphate form when used in steel production, fertilizers, and detergents. Phosphoric acids are utilized in production of fertilizers and soft drinks (soda).

Occurrence and Abundance of Phosphorus

Phosphorus is essential for life, as it forms the backbone of DNA and RNA and is part of ATP (adenosine triphosphate), among other biologically important molecules. Every day we take in ~1 gram of phosphate (PO43-) and store approximately 750 grams in our bodies (in the form of bones and teeth!). This equates to a 1.1% abundance of phosphorus in the human body, and it is the sixth most abundant element in living organisms. What do you think the first five are?

Because of its widespread use in fertilizers, phosphate can also accumulate in bodies of water, like lakes, and cause an overgrowth of algae. If too much algae are present, they can block the sunlight from reaching the aquatic plants, preventing photosynthesis. Photosynthesis produces oxygen in the water that the fish and other creatures in the lake need to breath. Therefore, if the aquatic plants are not able to perform photosynthesis, a lake can “die.” Phosphorus has only ~0.099% abundance in the Earth’s crust and occurs in mineral deposits of calcium phosphate (Ca3(PO4)2), known as “phosphate rock.” Phosphate rock is found in large quantities in the United States and other parts of the world (Arab nations, China, Russia) and is our main source of phosphorus today. In the universe overall, phosphorus has an abundance of 0.0007%.

Phosphorus is commonly used in scientific research and development of semiconductors as a dopant (an impurity added intentionally to a substance to alter its properties). Phosphorus is also being used to make light-emitting diodes (LEDs). Its isotopes are used as radioactive tracers in biochemical labs. Additionally, phosphorus-containing compounds (tributylphosphate and organophosphate) are used to extract uranium in the reprocessing of spent nuclear fuel.

The person who is attributed with phosphorus’s discovery in 1669 is Hennig Brand. We don’t know who discovered the twelve elements prior to phosphorus, so Brand technically became the first person in history to discover an element. Brand’s research was not glamorous; he experimented with urine. Urine contains relatively large quantities of dissolved phosphates, and when Brand evaporated the urine, he produced a white material that glowed in the dark (the chemiluminescence mentioned earlier) and burned like crazy! Brand was actually an alchemist at heart. The poor guy was hoping that he could turn urine into gold but discovered phosphorus instead. Eventually Robert Boyle got the tip that Brand’s process was derived from “somewhat that belonged to the body of man,” and he further refined the process. It was Boyle who first used phosphorus to ignite sulfur-tipped wooden splints (an early match stick) in 1680.

Phosphorus in the Future

Because phosphorus is used so heavily worldwide as a fertilizer, there is concern that the production of phosphorus may have already peaked or will peak soon. Its annual demand is rising nearly twice as fast as the growth of the human population. After peak production has been reached, it is likely that global shortages will start to occur.