Platinum is the 78th element of the periodic table and classified as a transition metal. This silvery-white metal is very dense and malleable, and is considered a precious metal. Platinum is commonly used as a catalyst for chemical reactions, but it’s much more widely known to be a part of jewelry and extravagant decorations.

Platinum’s Place in the Periodic Table

Platinum got its name from the Spanish word platino which means “little silver”. It’s classified as a transition metal along with the other elements in the central block of the periodic table, but it is also a part of the platinum metals group which includes ruthenium, rhodium, palladium, osmium, and indium as well. They are all grouped together because they are relatively inactive and therefore have similar uses and applications. 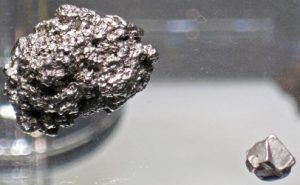 Platinum is a shiny, silvery-white metal that is smooth to the touch. It is usually found in nature in a metal ore and is often found in combination with other metals of the platinum or noble metals group. The name noble metal is in reference to the noble gases group of elements which are very unreactive, just like this group of metal elements. All of the platinum group metals have similar physical and chemical properties. They also have the catalytic properties that platinum is commonly used for. Platinum is a very stable element that does not corrode easily, and is considered non-toxic. Platinum has very high electrical and thermal conductivity, like a lot of other transition metals.

Platinum is a very dense element that has the malleable and ductile properties that are common for metals. To put platinum’s density in perspective, it is twice as dense as silver so if you wore platinum jewelry, it would be noticeably heavier than silver jewelry.

Platinum is very unreactive and is considered chemically inert. It is not a very good attractor or releaser of electrons, so, it maintains a relatively stable state. It will not oxidize in air and is resistant to acids. Only the strongest of acids, like aqua regia (a mixture of anhydrous nitric and hydrochloric acid), are able to affect it. However, platinum will dissolve in very hot basic solutions. Platinum also has a rather unusual ability to absorb large quantities of hydrogen gas at high temperatures, similar to how a sponge absorbs water. Platinum doesn’t need to react to be stable.

The most common platinum alloy is a combination of platinum and iridium that is used in the jewelry industry because the combination makes the alloy a little bit harder. There is also a platinum/ruthenium alloy that is used in the jewelry industry and has a slightly brighter white color than pure platinum. Most of the platinum used in medical devices and surgical implants is in alloy form which is harder as well.

Platinum compounds are quite commonplace in inorganic chemical reactions. For example, platinum (IV) chloride is used in a lot of inorganic chemical reactions. The drug cisplatin has a similar chemical structure (Pt(NH3)2Cl2) and is frequently used in the treatment of testicular cancer. Cisplatin is actually quite well known in the scientific community because it is incredibly effective in its treatment of testicular cancer. Most of the uses for platinum compounds are within in the medical field.

Occurrence and Abundance of Platinum

Platinum is most commonly mined in Russia and South Africa, but there are also much smaller mining ventures in Canada, the US, and Australia. In its pure form, platinum is more commonly found either with other platinum group metals, or in platinum containing ores like sperrylite and cooperite. Platinum is more abundant in meteorites (0.000098%) than it is in the Earth’s crust (3.7×10-6%). It is also not found in humans or in the oceans in any form. 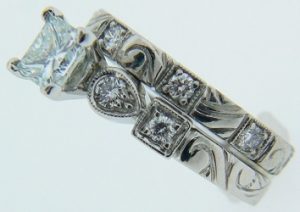 “Ladies Platinum & Diamond Wedding Set” by Renee V is licensed under CC BY 2.0

The most well-known use for platinum is jewelry and lavish décor, especially since this has been a practice since ancient times. In the 2000s, platinum jewelry accounted for anywhere from 25-50% of the demand for platinum. Platinum doesn’t tarnish like a lot of other metals used for jewelry, making it particularly attractive to long-term buyers. Most platinum jewelry is between 95-85% pure. Platinum is also used in the hard disk drive coatings on the hard drives of personal computers.

Platinum is used as a catalyst, a substance that aids a reaction without being permanently changed, in many chemical reactions. The most common use of platinum’s catalytic properties is in the auto industry. The exhaust system of cars uses platinum to turn harmful emissions like carbon monoxides, hydrocarbons, and nitric oxide into carbon dioxide and water. It also acts as a catalyst in fuel cells which could be used like batteries or portable generators. Lastly, platinum is used in anti-cancer drugs and as a part of several surgical implants.

Platinum was discovered by two scientists working independently in South America: Antonio de Ulloa in 1735 and N. Wood in 1741. However, platinum has been used by ancient cultures in Egypt and South America for jewelry and decorations. Interestingly, it was not used by ancient Greek, Roman or Chinese cultures.

Platinum in the Future

Today, about 50% of cancer patients receive some sort of platinum containing treatment for their cancer, and that number is expected to rise. Some of the common medications include cisplatin, carboplatin and oxaliplatin. These platinum-containing drugs are effective because the platinum stays unbroken down in the body for extended periods of time and can aid the other active parts of the drugs by prolonging their exposure. Given the prevalence of these kinds of treatments, researchers will likely be developing more platinum-containing medications in the future.