Erbium is a lanthanide metal that is solid, silvery-white in its pure form. However, it is not found on Earth in a pure form. Like all rare earth elements, it is always found in minerals that contain other rare earth elements, such as yttrium, terbium, ytterbium, and dysprosium. It has intermediate reactivity. Erbium has no known biological role and is slightly toxic in its pure form. However, erbium compounds are non-toxic. Erbium is commonly used to modify the optical properties of materials, including the color of glass, the transmission of light through crystals, and production of lasers.

Erbium’s Place in the Periodic Table

Erbium is found in period 6 as part of the lanthanide group of elements. Lanthanide elements range from atomic number 57 to 71. They are part of the f-block elements because they fill the f orbitals.

Because of the similar chemical and physical properties of lanthanides, they are often found together in mineral deposits, and are difficult to separate. This made erbium very expensive until the 1990s, when technologies advanced to reduce the cost of purification. This allowed erbium to be used in a wider range of applications.

Pure erbium is a soft, silvery metal. As a pure solid, it forms a hexagonal lattice structure (i.e. 3-dimensional arrangement of atoms). Erbium is a poor conductor of electricity and intermediate conductor of heat. There are only about 20 other elements with lower electrical conductivity. Poor conductors are also known as insulators. It tarnishes slowly in air and can be burned to produce oxides. It reacts slowly with cold water and quickly in hot water, forming hydroxides. It can be dissolved to form erbium ion solutions in dilute acids. The salts of erbium are usually pink in color.

Erbium is solid at room temperature. It melts at 1522°C and vaporizes at 2863°C. These values are both similar to the melting and boiling points of iron. It has a high density similar to copper. 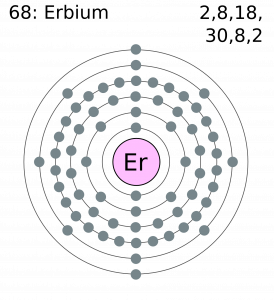 Erbium can be added to alloys to alter their physical properties. For example, the addition of erbium to vanadium lowers its hardness, making it easier to manipulate into different shapes. Vanadium metals are used to increase the strength of steel for tools that work at high speeds. The addition of erbium to nickel increases its heat capacity at very low temperatures. Heat capacity is a measure of the amount of thermal energy required to raise the temperature of a material by one degree. The high heat capacity of erbium nickel alloys makes them useful for applications at very low temperatures, such as the temperature of liquid helium (-269 °C).

Occurrence and Abundance of Erbium

Erbium makes up 3.8 parts per million of the Earth’s crust. This is similar to other lanthanides, including ytterbium, dysprosium, and gadolinium. Erbium is more abundant than some rare elements like uranium, silver, and gold, but less abundant than other elements like lithium, copper, and iron. Erbium is not detectable in the tissues of the human body, and so has no known biological role. It is mostly produced in China. However, the mineral xenotime can be found globally in countries like Norway, Brazil, Madagascar, and the United States.

One of the most common uses of erbium is as a light filter for photography. When erbium is added to glass, it creates a pale pink hue. The appearance of colors of glass can either be a result of filtering out specific colors of light or less commonly, fluorescence. Fluorescence is the production of light by a material. More specifically, fluorescence is when energy from light of a specific wavelength is absorbed by a material and then is released at a different wavelength. This is because the absorbed light increases the energy of an electron from its normal or ground energy level. When the electron returns the ground energy level, it releases the energy it had in the excited state. That energy is released in the form of light. So, when erbium absorbs light, it fluoresces to produce a pale pink light. It also produces light that is invisible, known as infrared light. As a light filter, this limits the passage of visible light through glass and produces infrared light. Infrared light is mostly invisible to the human eye, so the pink appearance of the erbium glass is due to a small amount of red light produced.

Erbium is useful in science and medicine for its optical properties. High power laser light that passes through glass that contains erbium produces a powerful infrared beam. Infrared light does not pass through water and tissue, so this laser can be used to treat medical conditions of the skin, where the laser light can essentially burn off diseased areas of the skin. This light is used to treat conditions like acne, wrinkles, blemishes, and scars. The goal is to replace damaged skin with new skin produced during healing of the burned areas. Because infrared light does not penetrate past the skin, this laser treatment cannot damage deep tissue and organs.

The chemist, Carl Gustaf Mosander, discovered Erbium in 1843. It was named after the name of the swedish village where it was isolated, Ytterby. It was purified from the mineral yttria, which contains another lanthanide known as yttrium.

Erbium in the Future

Erbium’s optical properties and low toxicity make it a target for research in the biomedical industry. As discussed above, erbium can fluoresce infrared light and erbium-containing lasers are used treat certain skin conditions. However, what if we wanted to use erbium to produce light inside the body that can be detected from the outside of the body? Infrared light would not be helpful because it cannot penetrate tissue. Erbium oxide is a compound being studied to overcome this challenge. Erbium oxide is unique because it can convert low-energy red light into high-energy blue light. This process is known as up-conversion. It is the opposite of normal fluorescence, because the light produced has higher energy rather than lower energy. Higher energy light can better penetrate tissues. So, doctors and scientists are working to develop ways to image the inside of the body using materials that take advantage of this property of erbium oxide.