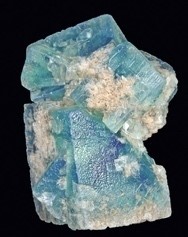 “Fluorine” by Parent Géry has not been altered and is licensed under CC Attribution-ShareAlike 3.0 Unported. This image shows fluorite crystals, a mineral which contains fluorine.

Fluorine is a super reactive, pale yellow-green gas. It is located near the other nonmetals on the periodic table, in the upper right corner. Fluorine is primarily known as the most reactive element. Due to its extreme reactivity, its uses are primarily for very energy intensive applications like bombs, nuclear energy, and high-temperature plastics such as Teflon.

Fluorine’s Place in the Periodic Table

Fluorine’s name is derived from the Latin word “fluere” which means to flow. Actually, the mineral fluorspar (aka fluorite) was first used for centuries as a flux (cleansing agent) in metallurgy, and that’s how the mineral earned its name (flux ~ fluere). When fluorite was found to contain much of this element, fluorine was accordingly given a similar name.

Fluorine is the first element in Group 17 of the periodic table, appearing before chlorine. Elements in Group 17 are referred to as halogens, a name originating from the Greek root “hal-“ which means “salt.” Halogens love to form salts. Anytime a halogen combines with a cation, the product is called a salt. Table salt, NaCl, is a prime example. Fluorine is in Period 2 of the periodic table, which is the least metallic period. This period also contains the elements with the most extreme properties in their respective periodic groups. Accordingly, fluorine is the lightest, most reactive, and most electronegative halogen.

Fluorine is a pale yellow-green gas with a pungent odor. Fluorine is the most reactive element and will even react with noble gases, the most stable elements, due to its high electronegativity. Fluorite is a mineral in which fluorine is found, and, though it should be colorless if pure, it exists in many different colors in nature due to various impurities. Fluoropatite, another fluorine-containing mineral, is actually very similar in appearance to fluorite, also existing in many different colors. The third main mineral that contains fluorine is cryolite, a glassy, colorless mineral, though it sometimes may appear white-gray.

Fluoride (the anion of fluorine) is found within the human body because it is added to both toothpaste and drinking water (it is believed to prevent cavities in your teeth!). However, too much fluoride is toxic, and elemental fluorine is highly toxic. It is also extremely corrosive and will cause extreme chemical burns on skin. Fluorine is classified as a gas and nonmetal. Gases are insulators and therefore are poor conductors of heat and electricity. Fluorine exists as a diatomic gas (two atoms of fluorine).

Fluorine is known for being the most reactive (to the point of being explosive) element due to its high electronegativity (it is the most electronegative element). The more electronegative an element is (i.e. the better it is at “stealing” electrons), the more reactive it is. Fluorine is very electronegative due to its small size (meaning charge from the protons in the nucleus is very strongly felt by nearby electrons) and nearly full electron shell (it only needs one electron to achieve a full shell). Its strong electronegativity also makes it impossible for any other element to oxidize its anion (fluoride, F–) back to elemental fluorine, which is why elemental fluorine is not found in nature. Its high reactivity is also what causes fluorine to be corrosive because corrosion proceeds via reactions with other substances (in which fluorine loves to partake), including skin.

Fluorine has only one naturally-occurring isotope: 19F. Therefore, 19F has 100% abundance. Because it is the only stable isotope, it is used in magnetic resonance imaging. There are seventeen isotopes that can be synthesized with mass numbers ranging from 14 to 31, and the most stable one has a half-life of only 110 minutes. The half-lives of the others are only on the scale of seconds.

When we refer to fluorine as a diatomic gas, its phase at room temperature, we are actually referring to fluorine’s allotrope, F2. Therefore, any description of fluorine in its gaseous form is actually describing the allotrope.

Though the elemental form of fluorine is quite dangerous, society does make use of several fluorine-containing compounds. Hydrofluoric acid (HF) is very dangerous, but it is used in scientific research. CFCs (chloro-fluoro-carbons) have previously been used as aerosol propellants and refrigerants, but during the 1990s their use was banned due to their destruction of the ozone layer. Because fluorine is so reactive, it forms many different compounds, combining with metals, nonmetals, and most noble metals, though most are not found in nature and are not notable for a particular use outside of the chemistry lab. The carbon-fluorine bond in particular though, is the strongest bond that exists in organic chemistry, and though it doesn’t exist naturally, it is used in man-made compounds for added stability.

Occurrence and Abundance of Fluorine

Fluorine is found in nature only within compounds like the minerals fluorite (CaF2), fluoropatite (Ca5(PO4)3F), and cryolite (Na2AlF6). Every year, 4 million tonnes of fluorite are produced, with 120 million tonnes still in reserves. Fluorite is mainly mined in China, Mexico, and western Europe. It is the 13th most common element in the Earth’s crust (0.054%) but has a very small abundance in the universe overall (0.00004%), making it the 24th most abundant element in the universe. Fluorine is found within the human body in bones and teeth, typically 3 mg total, which is equivalent to an abundance of 0.0037%.

Due to its explosive nature and safety concerns, fluorine is not used very widely in applications. In fact, fluorine was not produced on a large scale until WWII when the atom bomb and nuclear energy were being developed. Prior to that, fluorine was used in welding and to etch/frost glass. Fluorine may be most familiar to you in your daily life in the form of high-temperature plastics, as fluorine is used to make substances like the Teflon in non-stick frying pans.

Fluorine is used in the nuclear industry in the form uranium hexafluoride to separate uranium isotopes. Sulfur hexafluoride is used in high-power electricity transformers (those structures you sometimes see near the road) as an insulating gas. In the chemical industry, fluorine is used to make fluorochemicals like solvents.

Many chemists worked with fluorine before its ultimate isolation, an extremely dangerous feat. In 1530, Georgius Agricola described fluorite’s use as a flux in metalworking. In 1764, Andreas Sigismund Marggraf first characterized hydrofluoric acid (HF) when he heated fluorite in sulfuric acid and synthesized it. Carl Wilhelm Scheele repeated the experiment and named the acid “fluorspar acid.” In 1810, André-Marie Ampere deduced that hydrofluoric acid must be made of hydrogen and an element similar to chlorine. Sir Humphry Davy proposed that the unknown element be named fluorine.

During these initial studies, several chemists were injured and killed. Henri Moissan ultimately persevered and isolated elemental fluorine in 1886. This work earned him the Nobel Prize in Chemistry in 1906. These words used in his award ceremony demonstrate the difficulty of working with fluorine: “[I]n recognition of the great services rendered by him in his investigation and isolation of the element fluorine … The whole world has admired the great experimental skill with which you have studied that savage beast among the elements.”

Fluorine in the Future

Researchers are continuing to study and expand on fluorine’s utility in the nuclear energy field. Fluorine batteries are also being investigated for their potential extremely long lifetimes, which can be particularly useful for military and medical device applications.