Rhodium is a precious, transition metal that is hard and silvery in appearance. Precious metals are rare and valuable, and rhodium is one of the rarest elements on Earth. It is also known as a noble metal because it does not corrode or oxidize easily in air. It is used as a catalyst for chemical reactions with many industrial applications. As a precious metal, it is used in the fabrication of jewelry.

Rhodium’s Place in the Periodic Table 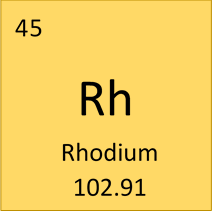 Rhodium is a transition metal in period 5 and group 9. It is a precious metal, which are rare, and include other elements like gold, silver, and platinum. They are usually shiny and ductile, which means they can be bent into different shapes. Rhodium is also known as a noble metal. Rhodium is part of the platinum group of noble metals, which also includes ruthenium, palladium, osmium, iridium, and platinum. They are resistant to corrosion, stable at high temperatures, and conduct electricity at a wide range of temperatures. Rhodium can be found in minerals that also contain platinum. The name rhodium is derived from the Greek word, rhodon, for rose.

Rhodium is a silvery, shiny metal. It is solid at room temperature. Rhodium does not react easily with air, water, or most other chemical compounds. Therefore, it tends not to make chemical bonds naturally. It can be dissolved in the strongest of acids, such as a mixture of hydrochloric acid and nitric acid. However, the compounds produced may be unstable. Rhodium can . Rhodium is among the top 10 best elements to conduct electricity and heat. There is no biological role for rhodium. It is non-toxic in its pure form but can be toxic as a compound, since most compounds are unstable. 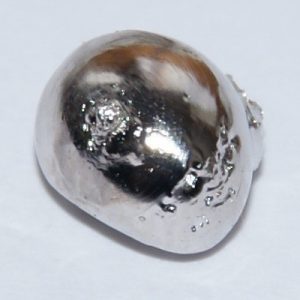 Rhodium has 1 valence electron in the 5s orbital. It has a wide range of possible oxidation states, with +3 being the most common. The others are 0, +1, +2, +4, +5, and +6. It mostly forms compounds with oxygen and halogens. Rhodium has a high electronegativity, so when it is part of a compound, it holds on to its electrons tightly. It is not soluble in water or most strong acids, so in nature it tends to exist in ores with other noble metals. 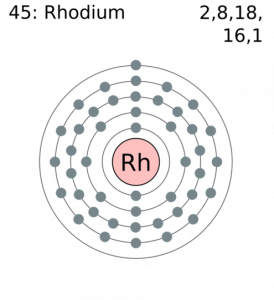 Rhodium has one stable isotope in nature, Rh-103. Several other isotopes, ranging from Rh-93 to Rh-117 have been observed in laboratories with half-lives ranging from days to hours. Many of these isotopes are produced during the radioactive decay of uranium. There are no major uses for rhodium isotopes.

One of the main uses of rhodium is in alloys with platinum and palladium. The addition of rhodium to alloys makes the metal harder and more resistant to corrosion. These alloys have a number of uses described below. 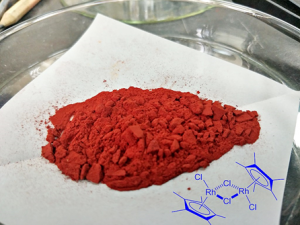 The most common rhodium compounds are oxides and halides. Rhodium iodide (RhI3) is used as a catalyst to synthesize acetic acid, as described above. Organic rhodium chloride (see picture) compounds are used to catalyze the formation of bonds between carbon and hydrogen, a process known as hydrogenation. Hydrogenation is a chemical reaction used to create pharmaceutical drugs, to solidify vegetable oil to make margarine and shortening, to stabilize fuel sources, and artificial sweeteners.

Occurrence and Abundance of Rhodium

Rhodium is one of the rarest elements on Earth. It makes up 0.00000007 % of the Earth’s crust. There are only 5 elements that exist on Earth that are less abundant. Those are iridium, krypton, xenon, radium, and protactinium. Likewise, it is also very rare in the universe with an abundance similar to Earth. It has never been detected in human tissue and has no known biological role. There are no major mineral sources of rhodium but it can be found in trace amounts in minerals of platinum, copper, and nickel. Therefore, it has been proposed that rhodium be isolated from the nuclear waste because it is a decay product of uranium. However, the rhodium isotopes produced are radioactive and would need to be held for several half-lives before they were safe to use. Remember that the time that it takes for an element to lose radioactivity is proportional to its half-life.

We likely encounter rhodium most commonly in valuable jewelry. It is used to coat white gold, which is silver in appearance. The coating protects the jewelry from corrosion and enhances its shine. You may be wondering now what makes white gold different from yellow gold. Pure gold, Au, is yellow and remains yellow when small amounts of copper and silver are added. White gold alloys usually replace copper with nickel or palladium. Jewelry of pure rhodium is very rare because it has a very high melting point and hardness, which makes it hard to shape into jewelry.

Catalysts are chemicals that speed up chemical reactions without forming bonds during the reaction. Rhodium is used by chemists as the preferred catalyst to produce large, industrial amounts of important chemicals. You may be familiar with acetic acid in its dilute form – vinegar. While it tastes great on food it is also an important chemical for industrial use. Acetic acid is a simple organic molecule (C2H4O2) that is used to produce materials like plastics, paints, photographic film, diagnostic medical tests, and antiseptics for ear infections. At 30-times atmospheric pressure and temperatures above 150°C, water (H20) and methanol (CH4O) combine to form acetic acid (C2H4O2) in the presence of rhodium.

Rhodium was discovered by William Hyde Wollaston in 1803. It turns out that rhodium can be found in trace amounts in natural sources of platinum. Wollaston dissolved platinum in a very strong acid known as aqua regia, which is a mixture of hydrochloric acid and nitric acid. It was then precipitated from the solution with sodium hydroxide, forming a rose-red crystal of sodium and chlorine (Na3[RhCl6]).

Rhodium in the Future

Nitrous oxide (NO) is a stable molecule that is also a contaminant and greenhouse gas produced when gasoline is burned (i.e. combustion). However, in the presence of rhodium, nitrous oxide decomposes to pure nitrogen and oxygen. Therefore, researchers are developing new ways to reduce the contamination caused by fossil fuel combustion. This is not a new concept though. Rhodium was first used by the car manufacturer, Volvo, to build catalytic converters to reduce the amount of NO produced by their internal combustion engines.