Indium is a post-transition metal that is soft, malleable, and silvery gray. It is so soft that it can be cut with a knife. It is commonly used to lower the melting point of alloys, to add transparent coating on glass that conducts electricity, and LCD displays.

Indium’s Place in the Periodic Table

Indium is a soft metal with a low melting point. When it is bent by physical force, a high-pitched sound is emitted. This is a property shared by tin and is a result of disrupting the ordered crystal structure of the element Contrary to the intermediate properties with neighboring elements in group 13, indium has a boiling point that is higher than thallium but lower than gallium.  At low temperatures (-269 °C), indium becomes a superconductor. Superconductors conduct electricity with very little resistance. most commonly forms compounds with +3 oxidation states. Indium is susceptible to corrosion at high temperatures but this can be limited if isolated from air and humidity. It does not pass through tissues easily but can be toxic if injected into the blood stream.

Indium is solid at room temperature and has a density similar to tin and promethium. It melts at 156.6 °C, which is close to the temperature of a match head when ignited. It has a boiling point close to that of manganese at 2072 °C.

Indium has 3 valence electrons, two in the 5s orbital and 1 in the 5p orbital. It is most stable in chemical compounds when it donates three electrons, which would lead to a more stable valence shell with 10 electrons. Atoms with larger numbers of electrons in their valence shells are more stable. This is This is known as electrostatic attraction. Indium does not react with water but can react with strong oxidizing agents such as halides. 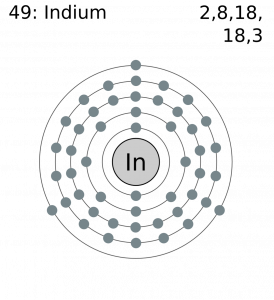 Indium has two naturally occurring isotopes, . These isotopes are known as primordial nuclides, which means that they were generated during the Big Bang, 13.8 billion years ago. Indium-113 is the only stable isotope and makes up 95% of indium. Indium-115 is radioactive but is still present in the universe because it has a half-life 1000-times longer than the age of the universe. Indium-115 and indium-113 are not purified from each other for specific applications, so materials that contain indium have a mixture of both proportional to their abundance in nature. 39 other synthetic isotopes exist, and their mass numbers range from 97 to 135. Of these, indium-111 is the most stable with a half-life of 2.8 days.

Indium tin oxide (ITO) is used to cover glass for a number of applications, including prevents condensation. Because ITO also conducts electricity, ITO coatings can be used to transmit electrical signals on touch screens, flat screen televisions, and solar panels.

Occurrence and Abundance of Indium 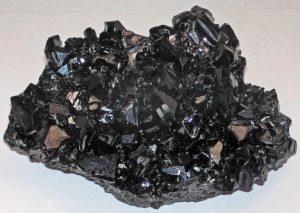 Indium was produced during the big bang, and is constantly generated by nuclear fusion in stars. It makes up about 3×10-8 % of the universe, which is more abundant than uranium but less abundant that gold and silver. On Earth, indium is the 68th most abundant element, and has a similar abundance to silver, bismuth, and mercury. It is rarely found in its elemental form on Earth. However, it’s a byproduct of zinc production as it is present in sphalerite mineral deposits, which contain zinc, iron and sulfur. Sphalerite deposits can be around continental Europe, Russia, Canada, the United States, Mexico, and Peru.

Indium compounds are used for a variety of common applications. It is used in street lights to reflect infrared light back to the light bulb, which is useful because the light bulb works most efficiently at high temperatures. With a low melting temperature, indium is also useful to solder metal components together. Liquid indium can be used to produce mirrors when poured on the surface of glass.

Have you filled cavities at the dentist? Indium is used in to reduce the amount of mercury required in metal fillings. Glass covered with indium compounds create a transparent layer that conducts electricity.

Indium was discovered by Ferdinand Reich and Hieronymous Theodor Richter in Germany in 1863. They were analyzing the elements present in common minerals. A common method to identify elements is by emission spectra, or the production of light. When elements are heated, electrons are excited to higher energy levels. When they fall back down to their base energy level, they emit various colors of light. Indium is named after one of the colors that it emits when heated – indigo.

Indium in the Future

With advances in the use of LCD monitors on common electronic devices, the demand for indium is expected to increase. It is estimated that within 20 years, sources of indium may be depleted. Scientists are researching how indium coatings can be recycled from disposed electronic devices. Researchers are also looking to expand the use of indium to improve lithium ion batteries by increasing their lithium storage capacity.