Rubidium is an alkali metal that is shiny gray in appearance. It is highly reactive and must be protected from air and water for storage.  It has uses that take advantage of its chemical and physical properties, including atomic clocks, medical imaging, and solar power.

Rubidium’s Place in the Periodic Table 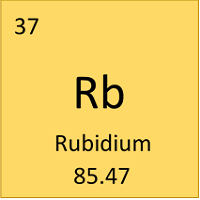 Rubidium is very soft and ductile. It reacts violently with water. The reaction with water produces hydrogen gas, which can in turn explode, adding to the explosiveness of this reaction. It can even burn spontaneously in air. Therefore, it must be stored under vacuum.  Rubidium conducts heat and electricity as well as tin, which is about 5 to 10-times less than the best conductors, copper and silver. Rubidium only has one stable oxidation state (+1). This is a property shared by other alkali metals because they only have one valence electron. Their +1 ions achieve the very stable electron configuration of noble gases. Rubidium has no known biological role. However, because it is similar in structure to other alkali metals important in biology, such as potassium and sodium, it is retained in the body in its ionic form. The ions are non-toxic. 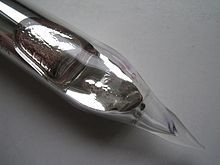 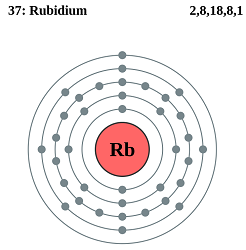 Rubidium has 1 valence electron in the 5s orbital. This makes pure rubidium very reactive. Donation of the valence electron forms an ionic compound, giving Rb+ the configuration of krypton. Krypton is a noble gas. Noble gases have the most stable electron configurations, so Rb+ is very stable and soluble in water. The most common ionic compounds of alkali metals are with halogens. That is because halogens also achieve electron configurations of noble gases when they accept electrons. These properties give alkali metals low electronegativity and halogens high electronegativity.

Rubidium has one stable isotope, rubidium-85. It has another naturally occurring isotope, rubidium-87. However, this isotope has a very long half-life, longer than the age of the universe, and so makes up a significant proportion of the rubidium in the universe (27.83%). Rubidium-87 is used by geologists. There are 24 other rubidium isotopes that have been synthesized in laboratories and have short half-lives.

Rubidium carbonate (Rb2CO3) can be added to glass to make it more durable and reduce its conductivity. It is also used as a catalyst in the production of natural gas. Rubidium silver iodide (RbAg4I5) conducts electricity better than any other ionic compound at room temperature. The silver ions in this compound move freely through the crystal lattice, and so can be used as a solid electrolyte to conduct electricity in batteries. This compound belongs to a family of compounds known as advanced superionic conductors, which include other combinations of alkali metals, such as potassium and cesium. Rubidium chloride has been added to gasoline to improve the fuel octane rating. It has also been used as an anti-depressant.

Occurrence and Abundance of Rubidium

Rubidium makes up 10 parts per billion of the universe. This is similar to lead, barium, and gallium. Rubidium makes up a larger portion of the Earth’s crust at about 60 parts per billion, making it the 23rd most abundant element. It exists as rubidium oxide, which makes up about 1% of the minerals leucite, pollucite, carnalite, and zinnaldite. It can be up to 3% of lepidolite, which is the primary source for mining. Lepidolite also contains potassium, lithium, aluminum, silicon, fluorine, and oxygen. The primary countries that have significant deposits of rubidium include Canada and Italy. Humans can consume rubidium that is naturally dissolved in water, and it makes up 0.00046% of the elements in the body. This is similar to levels of strontium and bromine. 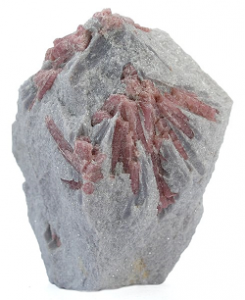 When burned, rubidium produces purple light. So, it is has been used for this property for the production of fireworks. Rubidium is also important for keeping time in electronic devices. It is used as a standard in atomic clocks. Atomic clocks use the known frequency of electromagnetic radiation (e.g. light, microwaves, and x-rays) to keep time. Electromagnetic radiation is released when electrons change energy levels.

Rubidium was discovered in 1861 by Robert Bunsen and Gustav Kirchhoff in Germany. Because rubidium emits red light when it is burned, it was named after the Latin word for deep red, rubidius. They isolated 9.2 grams of rubidium chloride from 44,000 liters of water. That amount of water can fill about 300 bath tubs.

Rubidium in the Future

Scientists are working to improve the use of PET scan image quality by using radioactive isotope, rubidium-82, in contrast solutions injected into the body. Rubidium is also being researched as an additive to materials used in a type of solar cell, called perovskite solar cell, to make them more efficient and cost-effective for the production of electricity from solar energy.