Sulfur is the 16th element of the periodic table and is considered a nonmetal. Sulfur, in its pure elemental form, is a bright yellow crystalline solid. This crystalline solid is formed by cyclic octatomic molecules with a chemical formula of S8. Some common uses of sulfur are in gunpowder, matches, and fireworks, which should give you some ideas about its flammability.

Sulfur’s Place in the Periodic Table

The name sulfur comes from the Latin word for brimstone, which was what sulfur was called in ancient times and in the Bible. The elements in group 16, which also contains oxygen, are commonly called the oxygen family or chalcogens. They are all important for human life. As you move down the periodic table, the metallic properties of the elements decrease and the melting points increase.

Sulfur is a bright yellow crystalline solid at room temperature. It can be very brittle and has no odor in its pure form. When pure sulfur is burned, it creates a blue flame. Sulfur, given its close relationship with oxygen, can cause metals to corrode when reacting with water and heat. Because it’s a nonmetal, it is not a good conductor of heat or electricity. Nonmetals also tend to have high electronegativities, low malleability, and are not shiny. It is very stable at room temperature because it doesn’t physically or radioactively decay. It is not toxic to humans, and it’s an important element for sustaining life.

Sulfur is odorless and tasteless in its pure form. It can have 3 different crystalline structures, which we will talk about in the allotropes section. This refers to the shape of the crystal formed to make the solid element. It is insoluble in water, and when it is melted, it becomes a dark brown, viscous liquid. Its melting point is almost the same as the boiling point of water.

Sulfur in compound is very susceptible to oxidation, which can then form different compounds that dissolve in water. Because sulfur and oxygen have the same outer shell electron configuration, and they both have high electronegativites, they tend to react together often in an oxidative process. For example, sulfur oxide dissolves in water to form sulfurous acid. In this reaction, the sulfur atom goes from being bonded to one oxygen to being bonded with 3. Sulfur is even more reactive when it’s heated up. Most nonmetals, including sulfur, tend to form acids when reacting to water, and in turn, they can then react with bases to form salts. Sulfur has one of the highest electronegativities of the periodic elements, behind only a handful of elements such as oxygen and fluorine.

There are 4 common isotopes of sulfur: 32S, 33S, 34S, and 36S. 32S is by far the most abundant of the isotopes and makes up 95% of all sulfur, followed by 34S and roughly 4% and both 32S and 36S at less than 1% each. All of these isotopes are relatively stable and given its overwhelming dominance 32S is what we consider simply as sulfur. However, all of these isotopes can be used in the medical field. 33S and 34S are used for genome research and 34S is used to make several radioisotopes that are used for therapeutic purposes.

Sulfur, as a nonmetal, does not have alloys, but it does have allotropes. Allotropes are different physical forms in which a pure element can exist. For example, charcoal and diamond are both allotropic forms of carbon. Sulfur has three allotropes or structures: orthorhombic, monoclinic, and amorphous. The orthorhombic form is the most common and forms that yellow, brittle solid mentioned earlier. The monoclinic form is also crystalline, and contains the S8 rings of the orthorhombic. These rings are formed by 8 sulfur atoms being covalently bonded to each other in a circle. However, the monoclinic structure is only formed in molten sulfur between 96°C and 119°C. Lastly, amorphous sulfur occurs above 120°C, when sulfur becomes a true liquid. This heat breaks the S8 rings of the other structures to forms chains of atoms, and the liquid has a brownish color.

There are many common compounds that contain sulfur such as sulfur dioxide, hydrogen sulfide, and sulfuric acid. These compounds are commonly found in chemistry homework, but also in the real world like in matches and in the main production of fertilizers. There are also many minerals that contain sulfur such as pyrite (iron sulfide), cinnabar (mercury sulfide), and galena (lead sulfide). Sulfur is also part of a common functional group called thiol, which is the compound SH added onto any other compound. Compounds that include thiol are organic chemical compounds similar to alcohols. Given the number of oxidation states of sulfur, there are many, many compounds containing sulfur.

Occurrence and Abundance of Sulfur

Sulfur is the tenth most common element by mass on Earth, which is interesting because sulfur makes up 0.042% of the Earth’s crust. It is found most often near hot springs and volcanic regions around the world. In particular, the Pacific Ring of Fire, which circles most of the Pacific Ocean, has a lot of sulfur deposits. The main countries where sulfur is mined are Indonesia, Chile, Japan, Russia, Poland, and the United States. Sulfur is usually mined as large chunks of relatively pure sulfur. However, roughly 25% of sulfur is recovered from petroleum refining operations. Sulfur is actually more abundant in other places rather than the Earth’s crust. For example, sulfur is 4% of meteorites, 0.2% of humans, and 0.05% of the universe. In fact, sulfur is considered one of the essential elements for human life. 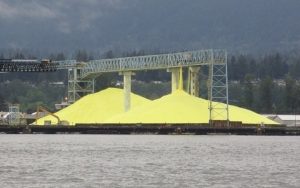 “Sulfur” by Michael Pereckas is licensed under CC BY 2.0

Sulfur and its many compounds have a plethora of functions. For example, sulfur can be found in the ignitor of matches, black gunpowder, and is important in the production of black rubber. Certain sulfur compounds are sometimes added to natural gas lines because the distinctive smell of the sulfur compounds can easily let people know when a leak occurs. Sulfites are commonly used to bleach paper and can be a preservative. Lastly, sulfur is one of the essential elements of human life. Sulfate taken from the soil, enters human bodies when we eat vegetables and the sulfur is needed to form two amino acids that we need to form all the proteins in our bodies.

Elemental sulfur has been a common pesticide in the Americas and Europe for quite some time, and is commonly found in more complex pesticides. While elemental sulfur has been deemed safe by the Environmental Protection Agency (EPA), there is some common research that found that living close to a farm that uses pesticides can cause reduced lung function in children. However, sulfur can also be used to treat skin diseases and in the production of cancer treatments. Given its highly reactive nature, I’m sure the scientific community will find many more ways to utilize this common element.

Sulfur has been around since ancient times, and was commonly referred to as brimstone. However, in 1777 a French scientist, Antoine-Laurent de Lavoisier, determined that the substance was actually an element, and it was added to the periodic table.

Sulfur in the Future

The oil refinement industry produces sulfur as an often-unused byproduct and scientists are always trying to find useful purposes to eliminate this waste. For example, a team of scientists has found a way to turn sulfur into plastic. This plastic can then be used for thermal imaging devices or lithium-sulfur batteries. The team melted sulfur to form a liquid-like polymer and then added 1,3-diisopropylbenzene which then turned the mixture into a red plastic. Their process is incredibly simple and cheap to reproduce, so they have been approached by several companies. Given the environmental implications of sulfur containing acid rain, any way to reuse the sulfur byproduct of oil refinement is incredibly helpful.