Barium is the 56th element on the periodic table and is a silvery alkaline earth metal. It is incredibly light for a metal and can be ground into a white powder. Barium can be found in fireworks, and is commonly used to help doctors read specific diagnostic X-rays more clearly.

Barium’s Place in the Periodic Table

Barium was named as such after it was purified from the mineral barite, or barium sulfate. While barium has a relatively low density, barium sulfate has a high density, and so the name barium comes from the Greek word barys which means heavy. Barium is also part of the alkaline earth metals, which all tend to be reactive, especially when forming basic oxides.

Barium is a soft, silvery metal that is light to the touch. Barium is most commonly found in combination with sulfate or carbonate, but can also be found in hydroxide or nitrate forms as well. Barium corrodes easily because it can easily be oxidized. Like other metals, barium is a good conductor of heat and electricity. Barium is an alkaline earth metal, like magnesium and calcium, and they were given this classification in the 1860’s. They all tend to form basic oxides and are electropositive, meaning they tend to lose electrons to form positive ions. Barium itself, tends to be nontoxic in humans, but compounds such as barium carbonate can be toxic to humans.

As mentioned previously, barium has a relatively low density compared to other metals which makes it feel really light. For comparison, barium’s density is 3.51 g/cm3, whereas gold’s is over 5 times that at 19.3 g/cm3.

Barium can be readily attacked by most acids, except for sulfuric acid, which will form a coating of barium sulfate on the surface of the metal and halt the reaction. Barium can also form strongly basic oxides such as barium hydroxide (BaOH)2. Barium has a relatively low electronegativity at 0.89, especially considering the least electronegative elements are around 0.7. Despite this low electronegativity, barium is never found in its pure form in nature because it is so reactive. This is in part because oxygen is so reactive, and bonds to barium in nature, but also because barium can be found in its ionic form, which makes bonding simpler.

Barium can form many different alloys, and is most commonly used in either alloy or compound form. Pure barium, or barium-aluminum alloys can be used to clear oxygen from vacuum tubes and barium alloy with nickel is commonly used in spark plugs. Barium alloyed with either calcium, manganese, silicon, or aluminum can be used as high-grade steel deoxidizers.

Many of the notable compounds of barium have been mentioned, simply because barium is rarely found in nature. The mineral barite is by far the most common, but barium chloride and barium hydroxide are more likely to show up in your chemistry homework. Barium chloride is one of the few water-soluble salts of barium, whereas barium hydroxide is used in analytical chemistry for titration of weak acids, specifically organic acids. Titration is a chemical technique used to determine the concentration of a solution that commonly utilizes acid/base reactions. 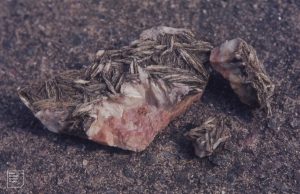 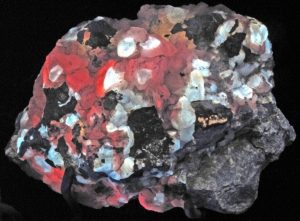 Occurrence and Abundance of Barium

Barium is only found in nature in compound form. It is commonly mined as the mineral barite, or barium sulfate, and the largest producers are China, India, and Morocco. Within the US, Nevada and Georgia are the largest producers of barium. Barium can also be mined as witherite, or barium carbonate, but this is less common. Barium makes up about 0.034% of the Earth’s crust and even less of the oceans at only 3×10-6%. Even though a couple of compounds of barium are toxic, it has 0.00003% abundance in humans.

Barium has only a few common uses, and it is usually in either compound or alloy form. For example, barium carbonate can be combined with fireworks to give the pyrotechnics a green color. It can also be found in a product called lithopone, which is a brightening pigment in printer paper and paint. Additionally, it can be added to alloys used in spark plugs, which makes the spark plugs more efficient.

Pure barium is good at making sure vacuums are completely clear of air. It does this by very easily forming compounds with any oxygen that could be present. Barium sulfate is also a very common contrast agent for X-rays, meaning that when it’s in the body during an X-ray, it stands out as bright white on the developed film. Barium sulfate is commonly used to coat the inside of the esophagus, stomach or intestines so they can be seen more clearly on X-rays or CT scans.

In the late 18th century, barium carbonate was discovered by William Withering, but it wasn’t until 1808 that barium was purified. The purification happened at the Royal Institute of London when Sir Humphrey Davy used electrolysis to separate barium from molten barium salts.

Barium in the Future

The medical community has actually seen a recent slow drop in the number of tests done with barium sulfate as a contrast agent. Since it is slowly becoming a less prevalent technique, it isn’t covered in medical residency as often. Because of the limited other uses of barium, and a dwindling presence in the medical community, there is little current research being done for future uses or applications or barium.