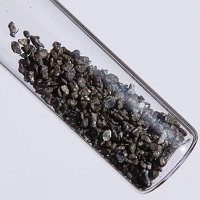 “Calcium” by Jurii has not been altered and is licensed under CC Attribution 3.0 Unported

Calcium is silvery white solid at room temperature and pressure. It is located
on the left side of the periodic table, near the other alkali and alkaline earth
metals. Calcium and its compounds are used for cement and plaster in building applications, in water treatment, and in the chemical industry.

Calcium’s Place in the Periodic Table

Calcium’s name is derived from the Latin word “calx,” meaning “lime.” This stems from the fact that lime (calcium oxide) is mainly made of calcium. Calcium is the third element in Group 2 of the periodic table, appearing after
magnesium. Elements in Group 2 are referred to as the alkaline earth metals.

Alkaline earth metals are called so because they form alkaline (basic) solutions when they react with water (by forming hydroxides). The word “earth” is included as part of the description given to their oxides. “Earth” is an old term used by early chemists to describe nonmetallic compounds that are not soluble in water and are poor conductors of heat, which describes the oxides of the alkaline earth metals.

At room temperature elemental calcium is a soft (easily scratched), silvery white solid. It corrodes rapidly in air and reacts with water. It also reacts vigorously with acids. As you know, calcium is an integral part to our bodies, so it is not surprising that its compounds are non-toxic to living organisms. However, calcium metal, because it reacts so violently with water, causes severe irritation when it comes into contact with moist parts of the body (e.g. mouth, esophagus, stomach).

Calcium does not occur as a free element in nature (because it is so reactive), but it can be found in many minerals, like limestone rock. It is also found within “hard” water. Calcium is classified as a solid and metal. Like most metals, calcium is a relatively good conductor of heat and electricity.

At room temperature and pressure, calcium exists as a ductile silvery white metal that can be easily cut or scratched. You can actually cut calcium metal with a knife (though it’s not a very easy task!)

Calcium is a very reactive metal due to its two valence electrons. It is inclined to donate those electrons, forming a chemical bond, in order to achieve a full octet. When it comes in contact with air, it corrodes (or tarnishes) to form a dark calcium oxide (CaO) and nitride (Ca3N2) coating (which prevents it from further corrosion). It can also be burned or combusted in air which results in a very bright light and a nitride product. Calcium reacts easily with water and acids to form various compounds as well (e.g. CaCl2 and Ca(NO3)2). Calcium is a good conductor of electricity because it has metallic bonding which allows the delocalized electrons (those from the outer shell) to flow freely from atom to atom, conducting electricity. It is a poorer conductor by volume compared to copper or aluminum but actually a better conductor by mass due to its very low density. Copper and aluminum are some of the best conductors out there, so that’s saying something!

No allotropes of calcium exist.

Occurrence and Abundance of Calcium

Calcium is essential for life, as it forms the teeth and other bones in our bodies in the form of calcium phosphate (Ca3(PO4)2), calcium fluoride (CaF2), and calcium carbonate (CaCO3). Calcium aids in blood clotting and muscle contraction. Calcium ions are also the most important messengers used by plant and animal cells for cell communication within an organism. The average human body contains approximately 1 kilogram (~2.2 pounds) of calcium, which equates to a 1.4% abundance, and makes it the most abundant metal in the human body. In fact, a lack of calcium results in a condition known as osteoporosis where the bones become extremely porous and easy to fracture. This condition is most common in older women. An excess of calcium can lead to kidney stones. We consume calcium in the form of milk and other dairy products, leafy green vegetables, fish, nuts, and seeds. Calcium is also present in egg shells, coral, many soils, and seawater (0.00042% abundance in oceans).

Calcium is the fifth most abundant element and third most abundant metal in the Earth’s crust with an abundance of approximately 5%. While it is not found in its pure form in nature, it does exist as part of several minerals including limestone (calcium carbonate), gypsum (calcium sulfate), fluorite (calcium fluoride), and apatite (calcium chloro- or fluoro-phosphate). “Hard” water contains calcium bicarbonate, which form stalactites and stalagmites in caves. In the universe overall, calcium has an abundance of 0.007%. The top producers of calcium are China, the United States of America, and India. Calcium is commercially produced from salt calcium chloride (CaCl2) and from limestone (CaCO3).

Aside from its use in alloys, pure calcium does not have many general uses due to its high reactivity. One main use of pure calcium draws from its quality to burn brightly. Calcium is used in fireworks to deepen the colors, and calcium salts are responsible for any orange fireworks that you see. It is also used as a deoxidizer (removes oxygen) in the production of steel.

Calcium is used as a reducing agent (it gets oxidized) in the production of other metals like thorium and uranium (which is critical for nuclear energy applications).

Though calcium compounds have been known and used for millennia (as a building material and plaster), it wasn’t until 1787 that Antoine Lavoisier suspected that lime (a mixture of calcium oxides and hydroxides) may contain a fundamental element. However, he was unsuccessful in further reducing it to pure calcium. In London in 1808, Humphry Davy first isolated pure calcium (and magnesium, strontium, and barium). His method involved producing calcium mercury and then distilling off the mercury to leave calcium metal. However, this method is not suitable for commercial production, and a commercial production method was not established until over a century a:er calcium’s initial discovery.

Calcium in the Future

Opportunities for calcium use in the future exist mostly for limestone, as many efforts are still underway to manipulate its physical properties and expand its use.