Bromine is a non-metal in group 17, period 4 of the periodic table. Pure bromine exists as a brown liquid at standard temperature and pressure. Bromine is used in chemical reactions to make flame retardants, pesticides, medications, and pH sensitive dyes.

Bromine’s Place in the Periodic Table

Bromine is a halogen like all the elements located in group 17. Halogens can exist as gases, liquids, or solids at room temperature. Because bromine is in period 4, in the middle of the halogen group, it has properties that are intermediate to the rest of the halogens.  It is the only non-metal on the periodic table that is liquid at room temperature. The name bromine refers to the Greek word, bromos, for stench or bad smell. 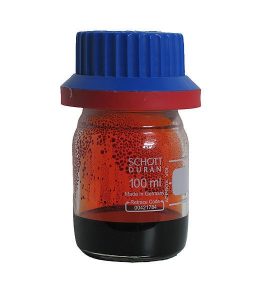 Bromine is a dark, reddish brown liquid at room temperature. Its properties are similar and intermediate to other halogens like fluorine, chlorine, and iodine. It is a very reactive oxidizing agent. Bromine is a poor conductor of electricity. This is because it exists as a covalent compound of two bromine atoms with no free electrons. Bromine is very reactive. Given its high reactivity, pure bromine is toxic and can cause chemical burns to your skin. However, the bromide ion that is present in water, is non-toxic, and is a trace element that is part of our daily food and water intake.

Pure bromine exists as Br2 and exists stably at room temperature if stored in an air-tight container. It has seven valence electrons (Fig3), so is only missing one electron to achieve the stability of 8 valence electrons, which is what makes it very reactive. Bromine can exist at multiple oxidation states, so it can form a wide variety of compounds. It is a strong oxidizing agent and forms compounds with metals (FeBr3), non-metals (HBr), and even other elements in group 17 elements (BrF, BrCl, Br2). 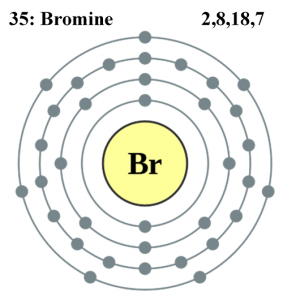 Bromine and chlorine are the only halogens that have more than one natural isotope. Two naturally occurring isotopes of Bromine exist in about equal proportions. Br-79 is about 51% of all bromine, and Br-81 is the rest. That’s why the atomic mass of bromine is about halfway between 79 and 81. These isotopes are stable. All other bromine isotopes that are produced in laboratories are radioactive. They range from Br-66 to Br-97, with a half-life from nanoseconds to several hours.

Bromine is not used in the production of alloys.

Given the high reactivity of bromine, nearly all elements on the periodic table form compounds with bromine. A few exceptions exist for elements that are not reactive (i.e. inert) like the noble gases. The simplest bromine compound is hydrogen bromide (HBr). HBr exists as a gas and when dissolved in water it becomes a strong acid because the bond between hydrogen and bromine is weak, allowing hydrogen ions to be easily released into solution.

Bromides of transition metals can be produced with Br2. This usually forms a covalent bond. Reaction of bromine with non-transition metals, like those in group 1 and group 2, usually form ionic bonds. The formation of bonds between carbon and bromine results in the formation of a broad family of compounds known as organobromines. They are the most common organic compounds that contain halogens in nature (e.g. organofluorines and organochlorines). For example, the ocean releases a million tons of bromoform (CHBr3) and 56000 tons of bromomethane (CH3Br). A million tons is about the weight of water from 250 Olympic swimming pools.

Occurrence and Abundance of Bromine

Of all of the elements on Earth, bromine is the 44th most abundant. It is less abundant than other halogens, such as fluorine and chlorine. It exists as ionic salts in Earth’s crust at about 2.5 parts per million. That’s a ratio of about 2 people in the city of Dallas, Texas. Because it exists as salts that are soluble in water, bromine tends to occur at high concentrations in salt lakes and mineral waters. For that reason, pure bromine is most easily extracted from those sources. The main sources of bromine are the United States and Israel.

Organic bromine compounds are commonly used as pesticides for agriculture. Certain organic bromine compounds also have flame retardant properties, and were once used commonly in fire extinguishers. However, it was later discovered that these compounds were contributing to depletion of the Earth’s ozone layer. Chemical solutions used to develop photographic film contain bromine. In the past, gasoline with lead added (i.e. diesel gasoline) were used as a fuel in cars. So, to prevent lead accumulation in the engine, compounds with bromine were added to gasoline. Diesel gas is not used in most cars these days, so there is less need for bromine additives.

Bromine used to be commonly used in medicines. Bromine compounds have a sedative effect, and have been used to treat epilepsy. However, these compounds were toxic, so were eventually replaced with safer compounds. The food and drug administration no longer approves its use as a medicine. In the chemistry laboratory, bromine compounds are also used as pH indicators. Bromophenol blue for example, is yellow at pH 3.0 and blue at pH 4.6. Ethidium bromide is an organic compound use by scientists to visualize DNA. It gets stuck in the DNA molecule, so when DNA is exposed to ultraviolet light, it fluoresces (Fig. 4). 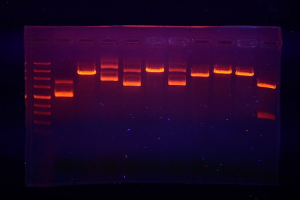 Bromine was discovered by two different chemists independently. The first was Carl Jacob Löwig in Germany. He isolated bromine from mineral water produced by a local spring. He concentrated the water and extracted bromine. Antoine Balard, from France, was the second chemist to discover bromine. He knew that other halogens, like Iodine, were present in seaweed. Ashes are salts left over after organic matter is burned. So he used seaweed ashes to create a salt solution, which he then distilled to produce a brown liquid that had properties similar to other halogens, like chlorine and iodine.

Bromine in the Future