Neptunium is a silvery metal of the actinide group of elements. The radioactive decay of uranium produces neptunium as a fission product, so neptunium is usually found in trace amounts associated with uranium ores. It is also produced as a by-product of nuclear fission reactions at nuclear power plants. It has no known biological role but is toxic and can accumulate in tissues of humans exposed to radioactive materials. It has no major applications but is used in nuclear physics research and weaponry.

Neptunium’s Place in the Periodic Table

Like actinides, neptunium is part of the f-block elements because it fills the f orbitals. The f shell holds 14 electrons in 7 orbitals. The actinides share many of the same chemical and physical properties. They all have large atomic radii and are radioactive. Uranium, thorium, and plutonium are the most abundant on Earth. However, all of the actinides are rare, considering they are all radioactive and are slowly depleted as a result of natural radioactive decay.

Neptunium is a hard, silvery metal. It is ductile, which means that it can be pulled into wires.  It is similar in hardness to manganese and titanium. It tarnishes when exposed to air, and this oxidation reactions proceeds more rapidly at higher temperatures. It has a relatively low melting point for a hard metal and its boiling point has never been measured. It is one of the densest elements on the periodic table. It can exist in aqueous solutions in a number of different oxidation states, and can react to form hydroxides, oxides, halides, nitrides, carbides, sulfides, hydrides, phosphates, nitrates, and sulfates. Neptunium is a poor conductor of electricity, about 100-times less than the best conductor, silver. It is a poor conductor of heat, also about 100-times less than the best conductor, silver.

Neptunium has 2 valence electrons in its 7s shell. The most common neptunium oxidation state is +5. However, it can exist as a free ion in water at many different oxidations states, including Neptunium III, IV, Vi, and VIII. The oxidation state in an aqueous solution is dependent on the pH and the presence of other elements in the solution. As an oxide, neptunium is amphoteric. This means that it can act as either an acid or base. In an acidic solution, the oxygen will react with hydrogen ions to form water and neutralize the pH. In a basic solution, it will react with free hydroxide ions to neutralize the pH. 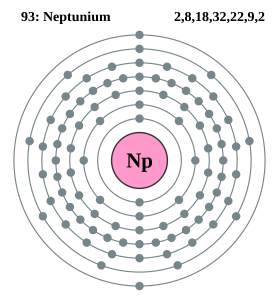 Neptunium has only one natural isotope, Np-237. It is radioactive and only exists in trace amounts as a fission product of uranium.  Its half-life is about 2 million years. All of the other, 22 radioactive isotopes of neptunium have short half-lives that range from tens of thousands of years to microseconds. Their atomic weights range from 219 to 244.

Neptunium is not used to make commercially important alloys. However, they have been used to study theories relating magnetism and electrical conductivity. It has three allotropes.

Occurrence and Abundance of Neptunium

Primordial elements are those that were present in the universe before the formation of the Earth. Even for the isotope of primordial neptunium with the longest half life, only about 1 part in 1 trillion would be present in the Earth’s crust today. This is why neptuniun is mostly found in trace amounts as a fission product of uranium.

Neptunium is not detectable in the tissues of the human body, and so has no known biological role. However, it remains hazardous to human health in the form of nuclear waste. It is not absorbed by the digestive tract, but if injected into the blood stream it can accumulate in bones.

Indirectly, the main use of neptunium is in the production of nuclear power. Its application is indirect because it is not used itself as a fuel source but rather a precursor to the generation of fuel for nuclear reactors. Like neptunium, primordial plutonium does not exist on Earth. All of the plutonium that is present was produced as a result of the radioactive decay of other radioactive elements. Neptunium-237 is used to generate significant quantities of plutonium-238, which can be used as a nuclear fuel source. To do so, nuclear physicists bombard neptunium with neutrons to produce plutonium.

There are no major uses for neptunium in science and medicine. However, it has been studied as a potential fuel source for nuclear weapons. No nuclear weapons have been generated using neptunium.

Neptunium was discovered by Edwin McMillan and Phillip Abelson in 1940 during experiments they conducted at the University of California, Berkely. They named it neptunium given its proximity to uranium in the periodic table, as they relate to the position of planets in our solar system.

Neptunium in the Future