Beryllium’s Place in the Periodic Table

Beryllium is named after the Greek name for beryl, ‘beryllo’. Beryl is a mineral that’s composed of beryllium aluminum cyclosilicate. Well known varieties of beryl include emerald and aquamarine.  Beryllium is a group 2 element that is also known as an alkaline earth metal. All of the elements in this group are shiny, silvery-white metals that are somewhat reactive under standard conditions.

Beryllium is a softer metal that has a silvery-white color. When found in its mineral form, beryl, it often looks like a mostly colorless crystal. Beryllium is relatively impervious to corrosion and is self-protective against things like atmospheric oxidation. It is a relatively good conductor of heat and electricity, like most metals, and is categorized as an alkaline earth metal. Alkaline earth metals all have similar electron structures and their subatomic similarity leads to them all having similar properties.  For example, this category of metals is often stable in the environment and includes other elements like magnesium and strontium. They also are all good conductors of electricity and they never have a higher oxidation state than +2 because their outer electron shell only has room for two electrons.

When in a powdered form, beryllium can be extremely toxic to humans. Long-term exposure to beryllium, say through mining jobs and activities, can lead to chronic beryllium disease or berylliosis in your lungs. This typically starts with coughing and shortness of breath and can even lead to fibrosis.

Beryllium has relatively low density for an element of the periodic table, but not necessarily when compared to everyday objects. For example, human bones have roughly the same density as beryllium, but a standard baseball is even less dense than that at 1.5g/cm3. Beryllium also has the highest melting point out of all the alkaline earth metals. The melting point of beryllium is roughly 6 times greater than the melting point of water, commonly referred to as freezing point.

Beryllium in its solid metal form will dissolve readily in aqueous basic solutions like NaOH, but it won’t dissolve in acidic solutions. Interestingly enough, when beryllium is in its powdered form it does dissolve in acidic solutions like HCl. This is due to a thin layer of oxide that forms on the surface of beryllium as a metal, that is not there to protect the element when it’s in a powdered form. The metal is more reactive to basic solutions that have –OH because of its common oxidation state of +2. In the context of chemistry homework problems, this means you can generally expect beryllium compounds to react in some way when added to a basic solution. The oxidation state of +2 also means that beryllium can form 2 covalent bonds when it’s in compound.

Beryllium only has one naturally occurring isotope, beryllium-9. However, there are six different radioactive isotopes that have been created in a lab, but they serve no commercial purpose. These radioactive isotopes are made by bombarding beryllium atoms with small participles and having some of the particles stick.

Beryllium is most commonly used in an alloy form, so the alloys are where most of the commercial value of beryllium comes from. Beryllium alloys are popular commercially because they tend to be tougher, stiffer, and lighter than a lot of similar alloys and metals. Two common beryllium alloys are with aluminum and copper. The beryllium and aluminum alloy is called Beralcast and is 3 times as stiff and 25% lighter than aluminum on its one. This makes is an excellent building material for things like helicopters. The alloy made with copper only contains 2% beryllium. The addition of beryllium still allows the metal to conduct heat and electricity, but also makes the metal stronger, harder, and more resistant to corrosion.

Occurrence and Abundance of Beryllium

Beryllium is never found in nature simply by itself, rather it is always found in various compounds. However, beryllium is relatively abundant on Earth with an estimated 2 to 10 parts per million found in the Earth’s crust. This roughly translates to beryllium making up 0.00019% of the Earth’s crust. This number may seem small but there is no shortage of supply of beryllium for the uses that we’ve found. It’s abundance in the universe as a whole and in human bodies for example, is significantly lower than its occurrence in the Earth’s crust. The United States is one of the largest suppliers of beryllium (usually mined as beryl) with the most prominent mine in Delta, Utah. There are also mines in China, Russia, and Brazil.

Finally, beryllium is indirectly a part of the jewelry industry. Gem stones like emeralds and aquamarine contain Be atoms in their chemical compound. Both of these gem stones come from the mineral beryl which has a chemical structure of Be3Al2(SiO3)6. The green color of emeralds is created by the addition of trace amounts of chromium. Aquamarine, however, gets its color from heat treatment of beryl. Certain slightly impure beryl takes on a very light green color which can then be heated to 750°F to turn the mineral into aquamarine. 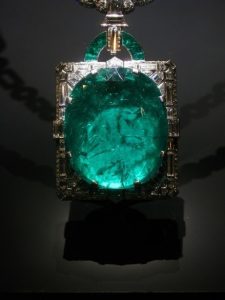 Beryllium alloys are used for a lot of different metal products such as machine parts and circuitry, satellite materials, even in space crafts. Some other common appliances that make use of beryllium compounds are microwave ovens, automobiles, radar, and construction equipment. Also, due to its toxic health effects, beryllium is studied in research labs to find ways to better predict who will develop health complications from exposure to the powdered form.

Beryllium, in the form of beryl and various gemstones, has been around since ancient times. However, in 1797 a French mineralogist named René-Just Haüy started doing experiments on beryl to learn more about its true nature. He worked with a colleague named Louis Nicolas Vauquelin to perform chemical analysis of beryl and they discovered a new material that was very similar to aluminum. While almost mistaken for aluminum, they had in fact discovered a new element, which they named glucinium. The names glucinium and beryllium were both used for almost 160 years before scientists stuck with the name beryllium, after the original mineral beryl.

Beryllium in the Future

There is little research being done on beryllium outside of the work on chronic beryllium disease. The disease could have a genetic pre-disposition factor that scientists are looking into, but the disease is not a common focus for the medical community because of its rarity. However, there have been 6 radioactive isotopes created in a lab, and exploration into alloys for increased efficiency of things like heat and energy conductivity are always ongoing.