Xenon is a colorless, dense, and odorless gas. It is a member of group 18 elements, which are also known as the noble gases. Noble gases have very low reactivity. This makes them useful for applications where chemical reactions are unwanted. Xenon is found and obtained from the atmosphere. When voltage is applied across an electrode in xenon gas it produces a bright flash light, so it has long been used in light bulbs used for flash photography and lasers. There is no known biological role for xenon but it does have specific beneficial effects on the body that are used in medicine.

Xenon’s Place in the Periodic Table

Xenon is in group 18 and period 5. Group 18 elements are known as noble gases, and include helium, neon, argon, krypton, xenon, radon, and a theoretical element called oganessen. Noble gases are inert, which means that they do not readily react with other elements. Therefore, xenon is found in trace amounts as a monoatomic gas, consisting of a single atom, in the Earth’s atmosphere. It can be made to react under very extreme laboratory conditions and with elements that have high electronegativity. It was first discovered as a small fraction of air and named xenon, after a Greek word that means foreigner, stranger, or guest.

Xenon is a colorless, odorless, dense gas. It can exist as a solid or liquid at very low temperatures and/or high pressure. As a noble gas, it has very low reactivity and electronegativity. Therefore, it is inert and usually maintains an oxidation state of 0. Consistent with the trend that atomic radius increases down groups, xenon is the largest known noble gas. When voltage is applied to an electrode in xenon gas, it produces a characteristic blue light. It is non-toxic but can have effects on the body when it is inhaled. 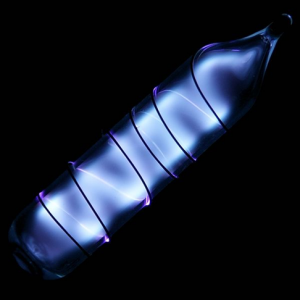 Xenon is a gas at room temperature. It has a low melting point of -111.8°C, and a low boiling of -108.1°C. Nowhere on Earth has ever been measured to be this cold. The record for the coldest place on Earth is held by Vostok Station in Antarctica at -89°C. It is not quite as cold as liquid nitrogen though, which has a boiling point of -210°C. It is less dense than the other noble gases as well as hydrogen, oxygen, nitrogen, fluorine, and chlorine gases. 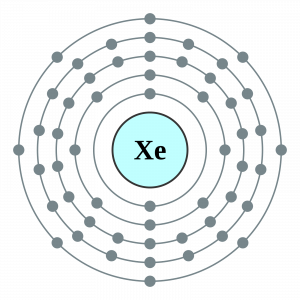 Xenon has 8 valence electrons. This is the hallmark of the noble gases and the reason that they are inert. Having a full valence shell is the most stable electron configuration that an atom can have. That is why most chemical compounds are stable when they are made up of atoms that have achieved noble gas configuration by donating, receiving, or sharing electrons. Therefore, an oxidation state of 0 is most common for xenon. However, under extreme conditions, xenon is able to form compounds easier than any other noble gases. This is because of its size. As the largest noble gas, its valence shell is the furthest from the nucleus. Therefore, the electrostatic force, or attraction, between the electrons and protons is lower than the other noble gases.

There are no uses for xenon in metal alloys.

Xenon wasn’t known to form compounds with other elements until 1962. Most xenon compounds involve bonding of elements with high electronegativity, such as fluorine, chlorine, and oxygen. When xenon and fluorine gas are combined and exposed to ultraviolet light, they react to form XeF2. This is one of the most stable compounds of xenon. It is used in chemical reactions to transfer fluorine atoms to other compounds, a chemical process known as fluorination. Fluorination is widely used in organic chemistry to add fluorine atoms to carbon and modify the activity of the organic molecule. Chlorofluoro carbons made the hole in the ozone layer.   Xenon dioxide was first produced in 2011. It is very unstable and decomposes with a half-life of two minutes.

Occurrence and Abundance of Xenon

Xenon makes up 1 part per 11.5 million of the atmosphere. It makes up 1×10-6 of the universe, which is similar to the abundance of gallium, rubidium, and barium. It is about 10 times more abundant than mercury, iodine, and boron. Pure xenon can be purified as a by-product of processes used to extract oxygen and nitrogen from the atmosphere. Krypton is also extracted by the same process. Xenon is one of the rarer noble gases, so it is 5-times more expensive than neon, and 1000-times more expensive than argon. 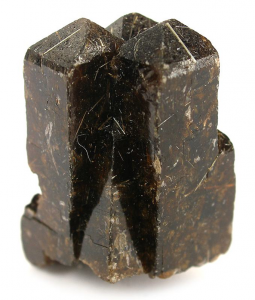 Xenon flash lamps were one of the first applications of this element. These lamps can be used for flash photography. These lamps also produce a variety of light frequencies that cause light to spread out in multiple directions. On the other hand, lasers produce light of a single frequency. That’s why laser light produces a single beam that can travel a long distance without spreading out. Xenon flash lamps are used to convert electricity to light. The light produced by xenon is then projected on the light emitting source of lasers, which convert the light to a single frequency. High pressure lamps that contain xenon produce light that is very similar to the sun. Therefore, it can be used to simulate solar light for laboratory testing of solar panels, for example. It is also used to project images in film for movie projectors.

Xenon is used as a general anesthetic. Anesthetics are used to induce unconsciousness in patients during surgey, for example. It has a number of effects on the nervous system. It activates the neurons in the brain that control mood and awareness. It is also beneficial for the treatment of problems with blood circulation. The radioactive isotopes of xenon are used to image living tissue, and even blood flow.

Xenon was discovered in England by the chemists, William Ramsay and Morris Travers in 1898. They also discovered krypton and neon. They identified xenon in analyses of the composition of liquid air. They distilled air into its individual gases and found that xenon was left over after the evaporation of other elements.

Xenon in the Future

The effects of xenon on the nervous system are a great interest to scientists. It is hoped that new therapies can be developed to treat brain injuries and heart attacks. There are no uses for xenon in the production of metal alloys. However, recently, geologists discovered that xenon forms alloys with liquid iron in magma under the ground at high temperature and pressure. Because xenon is so rare, it is also very expensive. So although it may have many useful applications, its cost can prohibit more common uses. To that end, researchers continue to develop methods to recycle xenon. This has lowered costs and has made it affordable enough to be used more widely as a safe alternative to anesthetics with negative side effects.