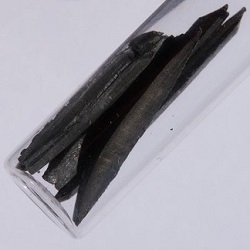 “Lithium” by Jurii has not been altered and is licensed under CC Attribution 3.0 Unported.

Lithium is a soft, silvery solid metal at room temperature and pressure. It is located on the top left side of the periodic table, near the other alkali and alkaline earth metals. Lithium is most commonly known for its use in rechargeable batteries, but it’s also used in alloys, pharmaceuticals, and for storing hydrogen fuel.

Lithium’s Place in the Periodic Table

Lithium’s name comes from the Greek word “lithos,” meaning “stone.” Many other alkali metals were discovered from plant material, but lithium was discovered in a mineral, which is believed to be the reason behind its name.

Lithium is the second element in Group 1 of the periodic table, appearing after hydrogen. Elements in Group 1 are referred to as alkali metals. Alkali metals have one electron in their outermost electron shell. This causes them to be very reactive and easily ionized (to become cations). They tend to have low melting points and densities. They are soft metals and silvery in appearance.

At room temperature, elemental lithium is a soft (easily scratched), silvery metal. It reacts vigorously in water. Because it is so reactive, pure solid lithium is not found in nature, but it is found in nearly all igneous rocks and in most spring water. Lithium is a toxic metal, except in extremely small doses. It is classified as an alkali metal and shares all of the qualities typical of those metals. Like most metals, lithium is a good conductor of heat and electricity.

At room temperature and pressure, lithium exists as a silvery metal that can be easily cut or scratched. Lithium has the lowest density of all solid elements and is the lightest metal.

Lithium is a very reactive metal due to its single valence electron. It is inclined to donate that electron, becoming an ion (cation, specifically), and form ionic compounds. However, lithium is the least reactive of all the alkali metals. Because it is so reactive, lithium does corrode, or tarnish, easily when it reacts with oxygen or nitrogen gas, forming an oxide or nitride layer on the surface of the metal. Lithium reacts vigorously with water to form LiOH and hydrogen gas (H2). You can observe this reaction and many properties of lithium in this video: https://youtu.be/Vxqe_ZOwsHs. Lithium is a good conductor of electricity because it has metallic bonding which allows the delocalized electrons (those from the outer shell) to flow freely from atom to atom, conducting electricity.

Naturally-occurring lithium is made up of two stable isotopes: 6Li and 7Li. 7Li has a natural abundance of 92.5% while 6Li has an abundance of 7.5%. Approximately 7 other isotopes of lithium exist with very short half-lives, on the order of milliseconds.

The most well-known lithium-containing alloys are the aluminum-lithium alloys. These alloys contain aluminum and lithium in varying amounts (up to 2.45% lithium by mass) and often include copper and zirconium as well. The main advantage of these alloys is their relatively low weight, compared to pure aluminum, thanks to the low density of lithium. This light weight advantage is leveraged by the aerospace industry to make jetliner airframes, fuel tanks (for the SpaceX Falcon 9 rocket), brake calipers (for Formula One racing cars), and helicopters. The final version of the US Space Shuttle’s external tank was made of an aluminum lithium alloy. Aside from the aerospace industry, aluminum-lithium alloys are also used in bicycle frames and high-speed trains. On the downside, these alloys are approximately three times more expensive than typical aluminum alloys, have poor resistance to corrosion, and have some poor strength-related qualities.

One other alloy type exists, the magnesium-lithium alloys, which were more recently developed. These alloys contain approximately 10% of lithium in magnesium and are used as anodes (where oxidation occurs) in batteries.

No allotropes of lithium exist.

Lithium compounds are used for a wide variety of applications. Lithium oxide (Li2O) is used in glasses and ceramics, and this is actually one of the largest uses of lithium compounds worldwide. Lithium chloride (LiCl) is unique because it is one of the most hygroscopic compounds (compounds that absorb moisture – water – from air). For this reason, it is used in air conditioning and industrial drying systems. Lithium stearate (C18H35LiO2) is used as a lubricant (i.e. grease) that functions at high-temperature. This is the third most common use of lithium after glass/ceramics and batteries. Lithium carbonate (Li2CO3) is used in pharmaceuticals that are used to treat manic depression (bipolar disorder). Lithium hydride is used to store hydrogen fuel (H2). Lithium hydroxide (LiOH) and lithium peroxide (Li2O2) are used to purify air (remove carbon dioxide) in confined spaces, like spacecraft and submarines. Various lithium compounds are also used in the nuclear industry.

Occurrence and Abundance of Lithium

Lithium has no known biological role and is therefore not found within the human body. On Earth, lithium is a relatively rare element found in low concentrations, with a 0.0017% abundance in the Earth’s crust. Because of its high reactivity, Lithium is not found in its pure form but is typically found within igneous rocks and spring water. It is found within the minerals spodumene, petalite, lepidolite, and amblygonite.

In the universe overall, lithium has an abundance of 6×10-7%, markedly less than other elements despite the fact that it was synthesized during the Big Bang. However, a total of 230 billion tons of lithium are estimated to be in seawater on Earth, maintaining an average concentration of 0.2 parts per million. The top producers of lithium are Chile, Australia, Argentina, Bolivia, and China. As you can see, many of these countries are in South America. There, they extract the lithium-containing saltwater from underground pools. Then they wait for the sun to evaporate the water from the saltwater, leaving behind a very concentrated salt product that contains lithium. Each batch takes 1.5-2 years to produce this way! Then, lithium metal is commercially produced by electrolysis (use of an electric current to drive a desired reaction) of a mixture of lithium chloride (LiCl) and potassium chloride (KCl).

You likely use lithium in your daily life because it is now used in the batteries of most mobile phones, laptops, electric vehicles, and any other electronic device that has a rechargeable battery. It is also used in non-rechargeable batteries for items like heart pacemakers. The low density of lithium allows for a lightweight battery with a high energy density.

You likely use lithium in your daily life because it is now used in the batteries of most mobile phones, laptops, electric vehicles, and any other electronic device that has a rechargeable battery. It is also used in non-rechargeable batteries for items like heart pacemakers. The low density of lithium allows for a lightweight battery with a high energy density.

Jozé Bonafacio de Andralda e Silva of Brazil first observed Lithium inside the mineral petalite (LiAlSi4O10) on the Swedish island Uto in the 1790s. He noticed that when petalite was thrown into a fire, it produced a bright red color. In 1817, Johan August Arfvedson of Sweden performed further analysis to determine that petalite contained an unknown metal, which he named lithium. Arfvedson was credited with the discovery of lithium; however, he was not able to isolate the lithium metal.

In 1821 William Brande was able to isolate a small amount of lithium but not enough to make measurements to characterize and study it. In true, old-time chemist fashion, Brande actually tasted a lithium solution that he made (there were clearly very limited safety protocols back then) and wrote that “its solution tastes acrid like the other fixed alkalis.” Finally, in 1855, German chemist Robert Bunsen (Have you ever used a Bunsen burner in your chemistry class? This is where it got its name.) and British chemist Augustus Matthiessen performed an electrolysis of lithium chloride to get large amounts of lithium metal.

Lithium in the Future

Doctors and scientists still don’t know exactly why lithium helps bipolar patients beyond the fact that it helps regulate the mood (but how?), so further research is being conducted to obtain a better understanding about this phenomenon. Of course, further research is also being performed to improve lithium batteries. In particular, researchers are looking for ways to use lithium batteries to hold solar energy. Finally, because lithium is so widely used, economists and researchers are predicting that we are going to need more lithium. As described earlier, lithium is typically produced from salty seawater, and this is because mining for lithium was economically much less feasible (too expensive!). However, with the demand rising for lithium, particularly due to electric vehicle batteries, some experts are saying that lithium mining may become a viable supply source as well.