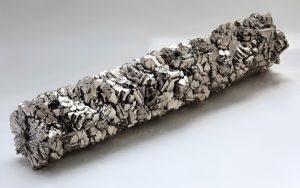 “Titan-crystal bar” by Alchemist-hp has not been altered and is licensed under CC Attribution-Share Alike 3.0 Unported.

Titanium is a shiny silver metal at room temperature and pressure.  It is a transition metal that is located with the other transition metals in the middle of the periodic table (the d-block). Titanium is most commonly used as an alloying agent, in surgical applications, and as a pigment.

Titanium’s Place in the Periodic Table 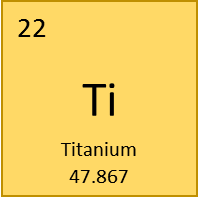 discoverer of titanium named it after the Titans, the sons of the Earth goddess in Greek mythology.

Titanium is the first element in Group 4 of the periodic table. The elements found in Group 4 are part of the larger transition metal group. The first three elements of Group 4 (titanium, zirconium, and hafnium) are the only ones that are found naturally. They all have high melting points and are very reactive, but they do tend to form oxide layers on their surfaces, which stops them from reacting further.

At room temperature titanium is a hard, shiny, strong metal. In nature it is found as part of rock minerals. Titanium is known for being resistant to corrosion, making it useful for many applications. Titanium in its bulk metal form is non-toxic, but its oxide (titanium dioxide) in dust form is a suspected carcinogen. Metal shavings or powder of titanium are extremely flammable and are considered a fire hazard.

Titanium is considered a reactive metal, but it does tend to form an oxide layer when exposed to air, which prevents it from reacting further. Titanium is classified as a solid transition metal. All transition metals conduct heat and electricity, but titanium is a relatively poor conductor compared to other metals.

Titanium is a ductile and unique metal because it is as strong as steel but much less dense, meaning it is much lighter weight than steel, 45% lighter to be exact. It has the highest strength-to-weight ratio of any metal. It is also more flexible than steel. When other metals permanently deform, titanium is able to spring back to its original shape. This combination of properties makes it ideal for alloying. Its extremely high melting point also makes titanium ideal for applications that require withstanding extreme heat.

Titanium is a very reactive metal. In air, it immediately oxidizes (a form of corrosion) to form titanium dioxide, and, depending on the temperature, it may keep oxidizing. The higher the temperature, the more dramatic the oxidation. At room temperature, the oxide forms a coating over the metal, preventing it from further oxidation. This is called a “passivation layer” because it passivates or makes the metal unreactive. This thin layer of titanium dioxide that forms upon exposure to air is what makes titanium so resistant to corrosion, and therefore stable, in sea water, aqua regia (a strong acid), and chlorine. Titanium is a relatively poor conductor of heat and electricity for a metal. That said, it is still a much better conductor than an insulating material. It is classified as a transition metal, and one criterion of all transition metals is that they can form bonds using electrons from more than one of their electron shells. This stems from the fact that an outer electron shell starts to fill with electrons before the inner shell is completely full (in the case of titanium, two electrons are in the third shell and two electrons are in the fourth shell).

Titanium alloys actually have more applications than pure titanium metal because they retain the advantageous qualities of titanium (strength, corrosion-resistance, etc.) and add greater flexibility and malleability. Titanium alloys usually contain aluminum and vanadium in varying amounts, but they may also contain traces of molybdenum, niobium, tantalum, zirconium, manganese, iron, chromium, cobalt, nickel, and copper. There are many grades, or varieties, of titanium alloys. Here we will discuss four of the most well-known grades.

Occurrence and Abundance of Titanium

Titanium has no known biological role and is therefore not found within the human body (unless a surgical object was put into place). On Earth, titanium is the ninth most abundant element, with a 0.66% abundance in the Earth’s crust. Titanium is not found in its pure form but is typically found within igneous rocks and sediments. It is found within the minerals ilmenite, rutile, sphene, titanates, and iron ores.

The top producers of titanium are Canada, Australia, and South Africa. Titanium is commercially produced by the Kroll process which involves reducing titanium chloride with magnesium. This extraction process is very expensive, which is why titanium is a relatively expensive metal. World production of titanium is more than 225,000 metric tons per year. In the universe overall, titanium has an abundance of 0.0003%.

Many applications of titanium’s alloys have already been discussed. Several other uses for titanium’s alloys include golf clubs and other sporting equipment, laptops, bicycles, and crutches. Pure titanium metal is used in pipes at power plants due to its corrosion resistance. It is also used at desalination plants and to protect the undersides of ships because of its stability in seawater. Because of its light weight, durability, attractive shine, and hypoallergenic properties, titanium is used in jewelry.

Titanium uses in science involve those previously mentioned for alloys: surgical and medical applications, aircraft design, and chemical processing. Titanium pipes and processing equipment are used in the chemical and petrochemical industries because of titanium’s resistance to corrosion. Titanium containers are being considered for the long-term storage of nuclear waste due to titanium’s corrosion resistance. Titanium is orbiting around the Earth as you read this article because the International Space Station is made up of many titanium parts.

The largest use of titanium (~95% of that produced) is in the form titanium dioxide, which is a bright white pigment. It is used in paints, paper, food, personal care products, and sunscreens. This compound was previously assumed to be non-toxic, but research is currently underway to determine if it is detrimental to humans. Titanium dioxide is a semiconductor (a material with conducting properties in between that of an insulator and a metal) that is used quite extensively in current research regarding solar cells and hydrogen fuel (H2) production. Many other uses for it are still being studied. Most oxides are insulators, so it is very unique and advantageous that titanium dioxide is conductive.

Titanium nitride (TiN) and titanium carbide (TiC) are both known for their extreme hardness and are used in cutting tools and coatings, like drill bits. Titanium tetrachloride (TiCl4) is a clear, volatile liquid that is commonly used in organic chemistry as a Lewis acid.

Titanium was discovered in 1791 by geologist William Gregor. He found it within the mineral ilmenite after he had used a magnet to remove iron oxide, leaving behind a white, metallic oxide. The oxide was also discovered, independently, by Prussian chemist Martin Heinrich Klaproth in 1795. Klaproth is the person who ultimately gave titanium its name.

Pure titanium was not isolated until 1910 when Matthew A. Hunter, an employee of General Electric in the United States, heated titanium tetrachloride with sodium under extremely high pressures. Until 1932, titanium was not used outside of the laboratory because preparation of pure titanium was so laborious and expensive. In 1932, William Justin Kroll developed a new method of preparation, which is now referred to as the Kroll process that was mentioned earlier.

Titanium in the Future

Titanium alloys’ current applications will likely be expanded upon, and other uses for a durable, strong, and lightweight metal will continue to be developed. Titanium (IV) complexes were some of the earliest non-platinum compounds that were tested for cancer treatment. These compounds are still being developed and optimized for titanium-based drugs. Some have already been released, but how they function is not yet fully understood.