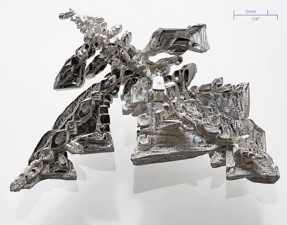 Silver crystal” by Alchemist-hp has not been altered and is licensed under CC Attribution-Share Alike 3.0 Germany.

Silver is a transition metal that is located with the other transition metals in the middle of the periodic table (the d-block). At room temperature, Silver is most notable for its uses in jewelry, photography, and electronic circuits. Stay tuned because, as one of the first metals every utilized by humans, silver has a rich history!

ELEM’s Place in the Periodic Table

Silver’s name is derived from the Anglo-Saxon name “seolfor,” which came from the ancient Germanic word “silabar.” As you pronounce these words can you hear how they sound very similar to “silver”? The chemical symbol, Ag, is an abbreviation for the Latin word for silver, “argentum.” Argentum originated from the Sanskrit word “argunas,” which means “shining.” Indeed, it’s easy to see that silver is very shiny. HoweverDo you have grandparents who have real silver flatware? This tarnishing is why the flatware needs to be polished from time to time.

Silver is the second element in Group 11 of the periodic table, appearing after copper. The elements found in Group 11 are part of the larger transition metal group. Group 11 holds the “coinage metals” (copper, silver, gold) as well as the metals with the highest electrical and thermal conductivity. The metals in Group 11 are not easily oxidized (which is partially why they were used to make coins).

Silver metal is a solid at room temperature and has a silver-white color. It is soft (easily scratched), malleable, and shiny. If silver has been exposed to sulfur components in the air for a period of time, it forms a black silver sulfide layer on the surface, which is the tarnishing described earlier. However, silver is stable in pure oxygen and water and is not easily oxidized. Silver can be found in nature as a nugget (less common) or mixed with another element (more common). Lead and silver are often found together in nature as the mineral galena (mostly lead sulfide). Galena is very shiny and metallic-looking. Argentite (silver sulfide) and horn silver (silver chloride) are other silver-containing materials found in nature. These compounds are called “silver ores” and usually exist as rocks in which the silver content may be less than 1% overall. This means that a lot of effort must be put in to retrieve a relatively small amount of silver, and a lot of waste material will be left over. Though silver is completely non-toxic, most silver salts are poisonous, and some are carcinogens. When ingested, aside from turning the skin a blue-grey color, these silver salts also cause burns and internal bleeding, resulting in death with sufficient exposure.

Silver has many known isotopes (35!), but only two are stable: 107Ag and 109Ag. Naturally occurring silver is actually a mixture of its two stable isotopes. The natural abundances of 107Ag and 109Ag are 51.84% and 48.16%, respectively. It is unique that the isotopes of silver are nearly equally abundant.

Because silver is so soft (and expensive!) several different silver alloys are used for various applications instead of pure silver. Most of the alloys are a mix of silver and copper. Sterling silver is the most common silver alloy, and it is made of 92.5% silver and 7.5% copper. Do you have any personal possessions that you believe to be real silver? Check for “925” written on the item in tiny print (time to bring out the magnifying glass!). If you find “925” printed anywhere this means that the item is actually made of sterling silver. This is most commonly found on jewelry, eating utensils, and surgical equipment. Sterling silver is used because it retains the appearance of pure silver with added strength from the copper.

Britannia silver was originally used in the late 1600s in England to make coins. Britannia silver is composed of 95.84% silver and 4.16% copper. This alloy was used to prevent people from melting down the coins for profit, which is what happened when the coins were made of pure silver.

Occurrence and Abundance of ELEM

Silver is found in the Earth’s crust and is mainly accessed through mining. Silver is mined in many countries around the world, but the top producers are located in North and South America: Mexico, USA, Canada, Peru, and Bolivia. China has also become a big producer in recent years. As mentioned earlier, silver is sometimes in pure form but is often found as an ore (mixed with another element). In human history, it is estimated that over 1.5 million tons of silver have been mined, and each year an additional 700 million ounces are added to that number. Unlike gold, most silver is not recycled or reused.

Silver is more abundant in the Earth’s crust (7.9×10-6 %) than in the universe (6×10-8 %), but both values are quite small. Given the desire for silver in society and the relatively low abundance, it is easy to understand why pure silver is so expensive (~$15/oz.). Silver is not used in the human body for any biological processes, so the amount of silver present in the body should be nearly zero. However, read further for the one reason you may find silver in your body.

In your daily life, you will mainly find silver in jewelry and flatware/eating utensils (often in the form of sterling silver). It is also used in mirrors because it is the best material known for reflecting visible light (it reflects 95% of the visible spectrum). Because of its high conductivity, it is not surprising that silver is used to make electrical contacts and circuits. Have you ever had gloves that could be used with touchscreen devices? Typically, those gloves are made with silver threads in the fingertips of the gloves. Silver salts are historically known for their use in photography because of their sensitivity to light, and some sources claim that as much as 30% of the United States’ industrial consumption of silver is used for photography purposes.

Recently, the antibacterial properties of silver have been harnessed to prevent clothes from being tainted with body odor. Silver nanoparticles that are incorporated into the clothing prevent the bacteria from creating body odor. If you have been waiting to hear about the one instance in which you might find silver inside your body, here it is. If your dental hygiene has ever been lacking and resulted in a filling, you may have silver in your mouth if you chose the “amalgam” or silver-looking type of filling. These types of fillings are also notorious for containing mercury (a toxic element), so think twice and do some research before getting a shiny new addition to your molar.

Silver is used in scientific research for high capacity batteries, as a catalyst for various reactions, and for medicinal purposes (due to its antibacterial properties). For these applications, pure silver is often used. Replacements or alternatives to silver are often preferred in research, though, because it is a precious metal and considered high cost.

Silver is a bit mysterious because it has been used by humans for so long. In fact, we don’t even know exactly when silver was first discovered or who discovered it. Silver is part of an exclusive group of elements; it is one of the first five metals discovered and used by humans (gold, copper, lead, and iron are the others). Ancient mines in Turkey and Greece indicate that silver mining started around 3000 or 4000 BC. These ancient civilizations determined a method for separating the silver from other elements, like lead and copper, by heating it to a very high temperature. Isn’t it amazing that people were such successful chemists long before modern technology came along? Silver mines were a main factor in the success of the rise of Athens, starting from 600 BC through the Roman era, and during Medieval times, German mines became the main source of silver in Europe. Ancient civilizations in Central and South America also mined silver.

ELEM in the Future

In the future, it is expected that the solar industry will increase demand for silver. Because silver is a precious metal that is excellent at conducting heat and electricity, it is ideal for use in solar panels. Since the solar industry itself is growing exponentially, it is expected to drive up demand for silver as well. Additionally, it’s possible that the antimicrobial properties of silver may be increasingly used for water purification purposes.