Samarium is a rare earth element of the lanthanide series, which are elements with atomic numbers from 57 to 71. It is a hard silvery metal. It has numerous applications in magnets, industrial chemical processes, cancer radiotherapy, and nuclear reactors.

Samarium’s Place in the Periodic Table

Samarium is a lanthanide. Lanthanides, scandium and yttrium make a group of elements known as the rare earth elements. Even though their name suggests that they are rare, they can be relatively abundant. The reason that they are called rare is because they are difficult to isolate. Rare earth elements are often found together in the same mineral deposits. They can be more difficult to isolate from one another by methods of chemical extraction because they react similarly to the chemical processes required to purify elements from mineral deposits.

Pure samarium is a hard silvery metal that oxidizes slowly in air. At room temperature, samarium is paramagnetic. That means that it is attracted by magnetic fields. In fact, magnets that contain samarium hold their magnetism longer than most other types. Samarium is slightly toxic but present in humans at small amounts. Samarium is used in superconductors that contain carbon or iron compounds. Superconductors are materials that have almost no electrical resistance, and so are the most efficient at conducting electricity. 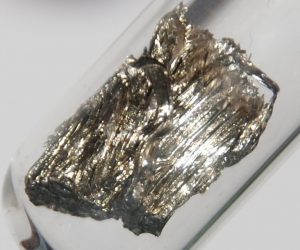 Samarium is solid at room temperature. It melts at 1072°C, which is around the temperature of magma. It vaporizes at 1900°C. That is close to the boiling point of lead and the temperature of the ceramic tiles that are used on the bottom of space shuttles when they re-enter the atmosphere at 4.6 miles per second. 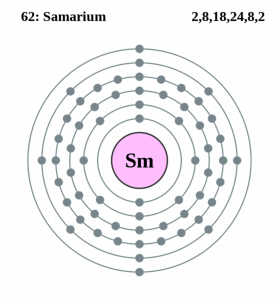 Samarium has two valence electrons. It is stable at room temperature but slowly oxidizes in air. Pure metals are often stored in mineral oil to prevent oxidation but samarium still oxidizes under those conditions. Samarium oxides appear yellow to pale green. It is so easily oxidized that when heated to 150°C in air it spontaneously begins to burn. The primary oxidation state for samarium is +2, corresponding to the donation of the two electrons in its valence shell. It can form aqueous solutions as Sm2+, turning the solutions blood-red. It can also be dissolved in weak sulfuric acid to form the yellow/green oxides mentioned above. Samarium reacts with cold water slowly and warm water rapidly to form samarium hydroxide. Given what you know about the oxidation state of samarium, can you predict the chemical equation of the reaction between samarium and water?

Samarium is primarily used in combination with cobalt to make magnets. They are generally composed of 1 part samarium to 5 parts cobalt. These magnets are easily broken or chipped, so have no mechanical uses.

Samarium (III) oxide is added to glass to absorb infrared light. Samarium oxide is used as a catalyst to dehydrate (i.e. remove water) ethanol. Ethanol is hydroscopic, meaning that it absorbs water from the atmosphere. It is very costly to remove all of the water from ethanol. Therefore, most laboratories use 95% ethanol instead 100% ethanol because it is much cheaper. Misch metal is a metal used to create sparks for lighters. Samarium makes up 1% of misch metal, and is responsible for the spark.

Occurrence and Abundance of Samarium

Samarium is more abundant on Earth than it is in the universe as a whole. While 5 x 10-7 % of the universe is made up of samarium, it is over 1000-times more abundant on Earth. China, the United States and India have the largest sources of samarium. It is present in a variety of minerals including monazite, bastnasite, cerite, gadolinite, and samarskite (see picture). These minerals contain other rare earth metals like cerium, lanthanum, neodymium, and yttrium. Samarium can be found in the liver and kidneys but its role in human biology is not well known. 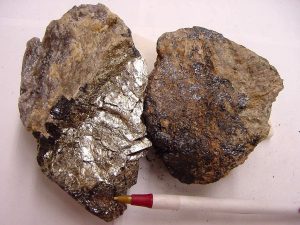 The magnetic properties of samarium have made it useful for applications in small motors, headphones, and musical instruments.

Samarium is often used as a catalyst in chemical reactions during the industrial purification of chemicals. It can be used as a catalyst for chemical reactions that decompose plastic and remove pollutants.Radioactive samarium-153 is used by doctors to treat lung, prostate, breast, and bone cancer. Samarium is also used by physicists at nuclear power plants. Radioactive decay results in the release (or radiation) of sub-atomic particles, such as neutrons. This type of radiation is dangerous because it can destroy complex chemicals, like DNA, in our body. Samarium is used to capture neutrons released from nuclear reactors.

Samarium in the Future

New x-ray technologies are being developed using samarium. Compounds of samarium, barium, fluorine, and chlorine act as phosphors. Electromagnetic radiation is composed of photons with different levels of energy. Radio waves, for example, have low energy, visible light has intermediate energy, and x-rays have high energy. When photons strike the surface of a material, they can be absorbed or reflected. Phosphors absorb photons of a high energy and release photons of a lower energy. Samarium phosphors have been found to absorb x-rays and produce visible light. By producing visible light, samarium phosphors can be used to view x-rays in real-time. The phosphors are reusable and so are better than photographic film, which can only be used once.