Gallium is a transition metal in group 13 and period 4 of the periodic table (Fig 1). It has a silvery blue appearance (Fig 2). It is solid but soft at standard temperature and pressure, and has a low melting temperature of 29.76 °C. Gallium has applications in electronics, solar energy, astronomy, and medical technology.

Gallium’s Place in the Periodic Table 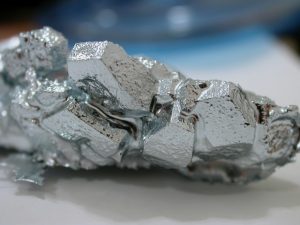 Gallium is very brittle. It is easily shattered into pieces when cold. At room temperature, it is so soft, that you could cut through it with a butter knife. Your body temperature is 37°C. Pure gallium would melt in your hand. Once it melts on your hand, it would be hard to get off because it sticks to almost everything. Gallium has a range in temperature from liquid to vapor that is greater than all other elements. It remains liquid at temperatures even hotter than lava. It would vaporize to a gas if it were on the sun though. Gallium is about 6-times the density of water. The density of aluminum is only 3-times the density of water, so a soda can would float on top of liquid gallium. 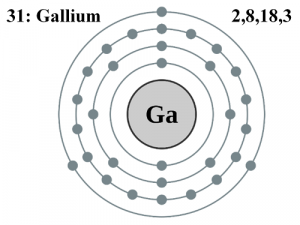 Gallium has three valence electrons (Fig3). This is not a stable configuration, so it exists most commonly as an ionic compound with an oxidation state of +3 (e.g. gallium (III) oxide). Pure gallium immediately reacts with oxygen when exposed to the atmosphere. This creates a shell of gallium (III) oxide (Ga2O3) that protects pure gallium below the surface. A similar reaction occurs when iron is exposed to the atmosphere. This produces iron(III) oxide, which is red and also known as rust. 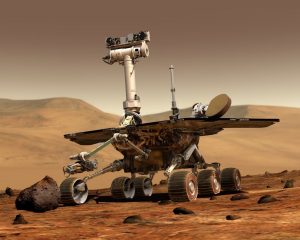 Occurrence and Abundance of Gallium

Gallium is rare in the Earth’s crust. It is estimated that there are 19 milligrams of gallium in each kilogram of crust. That’s like having only a few grains of sand to fill your pale at the beach – definitely not enough to build a sand castle. I suppose you would only need one grain of sand in an oyster to get a pearl though. There are also trace amounts gallium in seawater at 30 nanograms per liter. A nanogram is close to the amount of DNA in a single human cell. Our bodies are made of billions of cells. Purified gallium is mostly produced as a byproduct during the refinement of zinc. It is primarily mined in China, Germany, and Kazakhstan. However, it is found in trace amounts in the minerals diaspore, sphalerite, germanite, bauxite, and coal. The abundance of gallium in the universe is 1×10-6% (i.e. 0.00000001 of all matter in the universe). This is similar to the levels of lead, barium, xenon and rubidium. There is no known role for gallium in biological processes.

Imagine measuring the temperature of lava with a regular thermometer you can find at home or in a school science laboratory. It would probably burst. Gallium thermometers are used for just that purpose. It is useful because it remains liquid at high temperatures. Also, when injected into the blood, radioactive gallium tends to accumulate in unhealthy tissues. Doctors can then use special cameras that detect radioactivity to see if the gallium has accumulated anywhere in the body, like in tumors or infected tissues.

The creator of the periodic table, Dmitri Mendeleyev, proposed the existence of gallium in 1871. Gallium was discovered a few years later in 1875 by the French chemist, Paul-Émile Lecoq de Boisbaudran. He hypothesized that Gallium, element 31, would be found in zinc ores, since zinc has an atomic number of 30. He eventually purified gallium through the electrolysis of gallium hydroxide in potassium hydroxide.

Gallium in the Future

Neutrinos are subatomic particles much smaller than an electron, and can be produced during astronomic events like supernovas. Because neutrinos don’t interact with other atomic particles, they can travel much farther than the photons that make up visible light. Therefore, by detecting neutrinos that hit the Earth, scientists can study astronomical events beyond our galaxy. 101 tons of gallium-based acids are held in a detector tank for the GALLEX telescope in Italy. Gallium undergoes radioactive decay to germanium-71 when it is struck by a neutrino. Therefore, each detection of radioactive decay corresponds to the interaction with a single neutrino. Gallium has allowed scientists to study the origins of our universe.