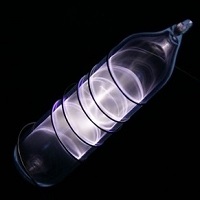 “Krypton-glow” by Jurii has not been altered and is licensed under CC Attribution 3.0 Unported.

Krypton is a colorless, odorless, tasteless gas at room temperature and pressure. It is located on the right side of the periodic table with the other noble gases. Krypton is primarily used for lighting applications (i.e. light bulbs, lamps, lasers).

Krypton’s Place in the Periodic Table

Krypton’s name is derived from the Greek word “kryptos,” meaning “hidden” because krypton was discovered “hidden” within another element, argon. The name is also fitting because it is colorless and therefore invisible to the naked eye.

Krypton is the fourth element in Group 18 of the periodic table, appearing after argon. Elements in Group 18 are referred to as noble gases, called so because they are very unreactive and stable. For this reason, noble gases are used in situations that require a stable element to maintain a safe and constant environment.

At room temperature krypton is an invisible gas with no odor or taste, so it’s not detectable by human senses. Krypton is not found in nature except at very low concentration in the atmosphere. It is generally regarded as non-toxic and nonflammable. However, breathing in this gas alone would cause suffocation, so it is classified as an asphyxiant. Inhalation of too much krypton gas would cause dizziness, nausea, loss of consciousness, and death, just like any other low oxygen condition. Krypton is non-reactive (inert) and highly stable. However, it does react with fluorine (though this is due to fluorine’s extremely reactive nature). Because it is so inert, it does not corrode easily. Krypton is classified as a gas and nonmetal. Like many nonmetals and gases, krypton is an insulator, so it is a relatively poor conductor of heat and electricity.

At room temperature and pressure, krypton exists as a colorless gas. Solid krypton does exist at low temperatures and high pressures, though, and it is a white, crystalline solid. Because the boiling point of krypton is so low, contact with the gas will instantly freeze tissue or organisms.

Krypton is so unreactive (and stable) because it has exactly the number of valence electrons needed to have a full outer shell. In other words, it has a perfect, complete octet, making it unlikely to gain or lose an electron to form a chemical bond. As a gas, krypton is not a good conductor of heat or electricity therefore, it is considered an insulator. Gases are insulators because of their extremely low density, relative to liquids and solids. It is easier to conduct electricity or heat from atom to atom when those atoms are physically close together, and in gases the atoms are farther apart. However, at low pressures, all noble gases, including krypton, will conduct electricity and fluoresce (as shown in the image above). The fact that low pressure is required may seem counterintuitive (since even lower density will occur at low pressure). Indeed, an exceedingly low pressure would not allow for current flow of electricity because the gas atoms would be too far apart. However, when an electric current is applied to a noble gas at (sufficiently) low pressures, the gas gets ionized. During this process, the excitation and relaxation of the electron energies cause fluorescence. Krypton fluoresces a smoky white color.

Krypton is unique because naturally-occurring krypton is actually composed of six essentially stable isotopes: 78Kr, 80Kr, 82Kr, 83Kr, 84Kr, and 86Kr. These isotopes have varying natural abundances: 78Kr (0.35%), 80Kr (2.28%), 82Kr (11.58%), 83Kr (11.49%), 84Kr (57%), 86Kr (17.3%). 78Kr is technically not stable but has the second-longest known half-life among all isotopes: 9.2×1021 years. Approximately 30 isotopes of krypton exist overall, and some of them have relatively long half-lives, on the order of years. The radioactive isotope Kr-81 is used to date extremely old groundwater and ice (50,000-800,000 years). In 2004, a study using Kr-81 revealed that some groundwater in the Sahara Desert had not seen the light of day for 1 million years! K-85 is produced during nuclear fission and has a half-life of 10.76 years. By monitoring its amounts in the atmosphere over countries like Pakistan and North Korea, researchers are able to determine where hidden nuclear facilities exist. Kr-83 has medical uses in MRI technology.

Krypton is not used in any alloys, and no allotropes exist.

Though krypton is quite unreactive, it is reactive enough to form a few compounds. Krypton does react with fluorine to form krypton difluoride (KrF2) and krypton fluoride (KrF). KrF2 is a white, crystalline solid that is only stable at temperatures below -30°C. KrF is used in some lasers that are relevant for nuclear fusion energy research. Krypton clathrates also exist, which is when atoms of krypton become trapped in the structure of water molecules.

Occurrence and Abundance of Krypton

Krypton is only found in nature in the atmosphere in very low concentrations. In fact, it is one of the rarest gases in Earth’s atmosphere, making up one part per million (ppm) by volume. Overall this amounts to more than 15 billion tons in the atmosphere. It has a natural abundance of 4×10-6% in the universe and ~1.7×10-8% in the Earth’s crust and oceans. It has no known biological role and is not found within the human body. Krypton is produced commercially by distilling it from liquid air, and approximately eight tons per year are extracted.

The high cost of obtaining krypton from the air has limited its practical applications. Krypton is generally used for lighting applications. It is used as the filling gas in energy-efficient fluorescent lights. It is also used in flash lamps for high-speed photography because ionized krypton appears whitish, a desirable color in photography. Krypton is also used in some “neon lights,” mixed with a variety of other noble gases to get the desired color. Ever noticed the runway lights when landing in an airplane in the dark? You can thank krypton for those guiding lights as well.

Most scientific uses of krypton involve nuclear reactors and energy, as krypton is produced by neutron fission of uranium in nuclear reactors. During the Cold War, for example, radioactive krypton was used to measure the amount of nuclear reactors produced by the Soviet Union. In the lab, krypton can be used to provide a stable, inert atmosphere in which to perform reactions. Astronomers use the relative abundance of krypton compared to hydrogen to measure how much element formation (nucleosynthesis) has taken place in interstellar space.

Krypton was discovered in 1898 in Britain by Sir William Ramsay, a Scottish chemist, and Morris Travers, an English chemist. They first discovered helium and argon and hypothesized that other new elements belonging to the same group likely existed. Ramsay was a smart guy, and knew from studying the history of element discoveries that sometimes elements can be found hidden within each other. He wondered if small amounts of a new element could be hidden within one of his earlier discoveries. They performed a series of experiments involving the evaporation of liquid air. The experiment did not go exactly as planned; they overdid the evaporation and were not able to extract as much argon from liquid air as they wanted. However, seemingly failed experiments are not always failures in the end. They were still able to identify a new element within the small amount of product they had. They confirmed that the element was indeed unique by using a spectrometer (applying a voltage to the gas) to look at the atomic spectra. William Ramsay was awarded the Nobel Prize in Chemistry in 1904 for these discoveries. Radon was the only noble gas that he did not discover. Until the 1960s, most scientists believed that noble gases would not form compounds. This turned out to be incorrect (as we have seen earlier, krypton does form a few compounds). Ramsay actually had this correct as well. What an intuitive guy! In 1902 he wrote, “I have had for a long time the idea that krypton and xenon may enter into combinations much more easily than the other gases; but how to bring it about?”

Krypton in the Future