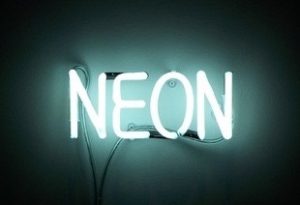 “Neon” by Lestat has not been altered and is licensed under CC Attribution-Share Alike 3.0 Unported.

Neon is a colorless, odorless, tasteless gas at room temperature and pressure. It is located on the right side of the periodic table with the other noble gases. Neon is most famously known for its use in lighting applications like “neon signs” and lasers, but it is also used as a refrigerant.

Neon’s Place in the Periodic Table

Neon’s name is derived from the Greek word “neos,” meaning “new.” The discoverer’s son actually proposed the name, and it’s possible he chose “new” because the color of neon’s glow was unlike anything that had been observed before.

Neon is the second element in Group 18 of the periodic table, appearing after helium. Elements in Group 18 are referred to as noble gases, called so because they are very unreactive and stable. For this reason, noble gases are used in situations that require a stable element to maintain a safe and constant environment.

Neon gas is invisible to all human senses at room temperature: it’s invisible and has no odor or taste. Due to its very low density, neon floats up into the atmosphere. Therefore, neon is not found in nature except at very low concentration in the atmosphere. It is a safe gas (non-toxic and nonflammable), but breathing in this gas alone would cause suffocation (making it an asphyxiant). Inhalation of too much neon gas would cause dizziness, nausea, loss of consciousness, and death, just like any other low oxygen condition. You are likely to never be in this situation, though, because neon gas is so rare. Neon is non-reactive (inert) and highly stable. Because it is so inert, it does not corrode easily. Neon is classified as a gas and nonmetal. Like many nonmetals and gases, neon is an insulator, so it is a relatively poor conductor of heat and electricity.

At room temperature and pressure, neon exists as a colorless, monoatomic (as opposed to diatomic) gas. It is the second lightest noble gas, after helium, and it glows reddish-orange in a vacuum discharge tube (more on why below). Additionally, the temperature range in which neon is liquid is the narrowest of any element, but it is in this state that it is used as a refrigerant.

Neon is so unreactive (and stable) because it has exactly the number of valence electrons needed to have a full outer shell. In other words, it has a perfect, complete octet, making it unlikely to gain or lose an electron to form a chemical bond. As a gas, neon is not a good conductor of heat or electricity, so it is considered an insulator. Gases are insulators because of their extremely low density, relative to liquids and solids. It is easier to conduct electricity or heat from atom to atom when those atoms are physically close together, and in gases the atoms are farther apart. However, at low pressures, all noble gases, including neon, will conduct electricity and fluoresce. This is exactly what is occurring in neon lights. The fact that low pressure is required may seem counterintuitive (since even lower density will occur at low pressure). Indeed, an exceedingly low pressure would not allow for current flow of electricity because the gas atoms would be too far apart. However, when an electric current is applied to a noble gas at (sufficiently) low pressures, the gas gets ionized. During this process, the excitation and relaxation of the electron energies cause fluorescence. Neon fluoresces the extremely bright red-orange color that we think of as a trademark of “neon signs.”

Naturally-occurring neon is composed of three stable isotopes: 20Ne, 21Ne, and 22Ne. These isotopes have varying natural abundances: 20Ne (90.48%), 21Ne (0.27%), 22Ne (9.25%). It is well-known and studied that 21Ne and 22Ne were created during the Big Bang and continue to be formed from various nuclear reactions. However, accounting for the amount of 20Ne is a bit mysterious because it is not known to be a product of current nuclear reactions. Therefore, we expect all the 20Ne to be from the Big Bang, but scientists have deemed that there must be another source and that current levels of 20Ne cannot be explained by the Big Bang. Neon has 12 other unstable isotopes with known half-lives.

Neon is not used in any alloys, and no allotropes exist.

Neon is very inert (unreactive) because it already has a perfect octet of electrons. Therefore, there are no true, strongly bound neon-containing molecules that exist. However, at high pressures and low temperatures, some neon clathrates exist, which is when atoms of neon become trapped in the structure of water molecules.

Occurrence and Abundance of Neon

Neon is only found in nature in the atmosphere in very low concentrations. In fact, it is one of the rarest gases in Earth’s atmosphere, making up 18 parts per million (ppm) by volume. However, it is the fifth most abundant element in the universe, with a natural abundance of 0.13%. Its abundance in the Earth’s crust and oceans is 3×10-7% and 1.2×10-8%, respectively. It has no known biological role and is not found within the human body. Neon is produced commercially by distilling it from liquid air. After this process, both helium and neon remain in the sample product, so helium is removed using a mixture of activated charcoal.

Neon is mainly used for making “neon signs” to be used in advertising. The signs are crafted out of a glass tube inside of which exists a vacuum (very low pressure). When the neon gas is ionized in this tube (by passing a current through it) it glows a bright red-orange color. Therefore, if you see any “neon signs” that are a color other than red, they contain a mixture of several gases which each glow different colors. Neon light is unique because it can penetrate fog, making it very useful for lighting in foggy regions (usually places that have a very cold climate). Airplanes and aircraft beacons also make use of this property. Neon is also used in lasers, and it is used as a cryogenic refrigerant in its liquid form. It has a refrigerating capacity that is 40 times that of helium. However, because of its rarity, liquid neon is 55 times more expensive than liquid helium.

Because neon is so unreactive, it is used in scientific research and manufacturing when an inert environment is required. This prevents the device, compound, etc. of interest from reacting or changing while it is being worked on or stored. Many elements or compounds will oxidize in oxygen-containing environments, for example. Additionally, neon lasers are used in the photolithography step (the process that forms and shapes the device) of silicon semiconductor manufacture. These semiconductors are used in microchips.

Neon was discovered in 1898 in Britain by Sir William Ramsay, a Scottish chemist, and Morris Travers, an English chemist. They first discovered helium, argon, and krypton gas. They had evaporated liquid argon and isolated krypton gas, but they were troubled because they expected that they would find a gas that fit directly above argon on the periodic table. (The discovery of elements sounds like a scavenger hunt sometimes, doesn’t it?) They repeated their experiment and were more careful to slowly evaporate the argon and collect the initial gas that was released. When they tested this gas in their atomic spectrometer (which allowed them to see the unique energy spectrum for an atom/element), it glowed what is now neon’s trademark red color. Imagine that discovery, at a time when a red light had never been seen before.

Travers described it as “the blaze of crimson light from the tube told its own story and was a sight to dwell upon and never forget… For the moment the actual spectrum of the gas did not matter in the least, for nothing in the world gave a glow such as we had seen.” In 1910, Georges Claude made glass tubes containing neon for the first time. After first failing to sell these lights for inside homes, he started bending the glass tubes to make glowing letters for advertising signs.

Neon in the Future

Fundamental chemical research regarding neon is still being conducted. It has many unique properties but is also fairly simple (small and early on in the periodic table with relatively few electrons), so it can serve as a model system for chemical understanding. There is also a desire to develop a cheaper and better way to isolate neon gas since it is quite expensive (due to its rarity, in part) and demand for it is still growing.

Recently, scientists at the Cambridge Crystallographic Data Centre and the U.S. Department of Energy’s Argonne National Laboratory were able to measure the structure of neon atoms inside of organic-inorganic frameworks for the first time ever (it’s challenging to measure due to neon’s relatively light weight), and an interaction between neon and the transition metal in the framework was observed. These frameworks are porous materials, and neon gas is flowed into the gaps or holes. Then high pressure and low temperature are applied to attempt to force neon to interact. Further understanding of this interaction may help with the isolation and production of neon gas in the future.