Cesium is a soft, silvery-golden alkali metal that is liquid just above room temperature. It is rare on Earth and is usually found in minerals that contain other alkali metals. Like all alkali metals, it is very reactive, and so does not exist in nature in its pure form. It only has one stable isotope and one radioactive isotope that exist in nature. Cesium is used to separate solids from liquid solutions, and in atomic clocks, international standards of measurement, and electronics. It is mildly toxic, often because it is similar in structure to essential biological elements, such as potassium.

Cesium’s Place in the Periodic Table

Cesium, an alkali metal, is found in group 1 and period 6. Other alkali metals include lithium, sodium, potassium, rubidium, cesium, and francium. Hydrogen is also in group 1 because it has one valence electron but it is not considered an alkali metal. A periodic trend in this group is that reactivity and atomic radius increase down the group. All group 1 elements react with water easily, producing hydrogen gas and strong hydroxides. Therefore, to store alkali metals, they must be protected from water in a vacuum or submerged in mineral oil. When compounds are heated to high temperatures, they can decompose into their individual atoms and release elements in their ionic and gaseous forms. This process can also produce light, and the color of the light is unique for each element. Cesium was discovered by this process, which is called flame emission spectroscopy. On burning the salts present in mineral water, cesium was identified by the production of light blue light. Therefore, it was named after the Latin word, caesius, for sky-blue. 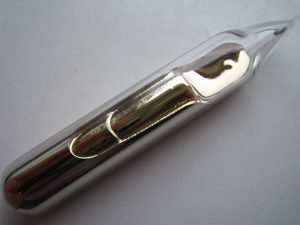 Cesium is a silvery golden metal. It is solid and very soft at room temperature. A few degrees warmer and it melts at 28.5°C. Cesium reacts explosively with water vapor in the air at temperatures above -116°C. The explosion is produced as a result of the production of hydrogen gas. Cesium hydroxide is the other product of the reaction, and it is a very strong base. It is one of the most reactive elements within group 1 and across the entire periodic table. It has one stable oxidation state of +1, and is usually found in mineral deposits of other group 1 elements in small amounts. Cesium is an intermediate conductor of electricity and heat, in both cases similar to lead. For example, it has an electrical conductivity 10-times less than copper, and a thermal conductivity about 10-times less than gold. There is no biological role for cesium and it is mildly toxic. 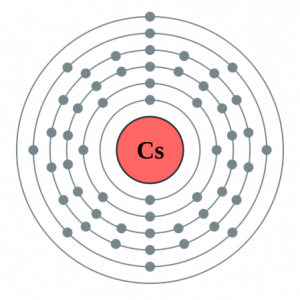 Cesium has 1 valence electron that fills the 6s orbital. Therefore, donation of 1 electron gives an electron configuration equal to xenon, and the most stable oxidation state is +1. Remember that in addition to the occupancy of orbitals by electrons, distance of electrons from the nucleus can also influence the strength with which they are attracted by the positively-charged nucleus. Cesium has the largest atoms of all of the elements on the periodic table that have ever been measured (some are predicted to have larger but have not been measured). For that reason, it also has the third lowest electronegativity of any element.

Cesium only has one stable isotope, Cs-133. It makes up 100% of the cesium deposits found on Earth. It has three other natural isotopes that only exist transiently, or for a short period of time. They are Cs-134, Cs-135, Cs-137. Cs-135 has a half-life of about 2 million years. That may seem like a long time but it is very short compared to the age of Earth, which has existed 2000-times that, at about 4 billion years. Cs-134 has a half-life of 2 years, and Cs-137 has a half-life of 30 years. These are produced from the radioactive decay of fuel in nuclear reactors and atomic bombs. Thirty six other isotopes of cesium are known to science and have been observed in laboratories.

Cesium can form alloys with other alkali metals, mercury, and gold. Alloys of mercury are known as amalgams. Alloys of cesium, potassium, and sodium have the lowest melting points of any alloys known (-78°C). Cesium alloys have few practical uses but can be used in atomic clocks.

Cesium-doped yttrium lithium fluoride is a crystal that is used to convert infrared light into visible light. Since cesium does not occur in a pure form naturally, it must be isolated from chemical compounds. Pure cesium is commonly produced from the reaction of cesium chloride with lithium. Lithium is more reactive and gives up its electron more easily than cesium, so chlorine would prefer to be bound with lithium. Therefore, in this reaction, lithium chloride is formed, which leaves behind pure cesium. It is possible to predict this outcome because lithium has a lower electronegativity than cesium.

Occurrence and Abundance of Cesium

Cesium makes up .00019 % of the Earth’s crust. That is similar to beryllium and tin, and about 10-times less thgan gallium and nitrogen. In the universe as a whole, it makes up 8 x 10-8 % of the universe, which is similar to bismuth and gold. Minerals are formed when molten rock, or magma, cools. Many elements pack together and crystallize together. However, because cesium atoms are very large, they cannot fit easily into the lattice formed by other elements during solidification. Therefore, it is one of the last elements to solidify, allowing it to concentrate to form large crystals. The rocks that contain these crystals are called pegmatite, which contain minerals like pollucite (pictured). Pollucite contains large amounts of cesium. However, it is rare and only found in significant amounts in Canada, Zimbabwe, and Namibia. Pollucite also contains aluminum, silicon, and oxygen.

The devices we use to measure things every day like rulers (meters), clocks (seconds), thermometers (degrees), and scales (grams) are more complicated than you may think. All of the devices used to take accurate measurements are based on a set of universal standards that are controlled by the scientific community. These standards are objects that are housed by the International Committee for Weights and Measures stored safely in Paris, France. For example, the meter was originally defined as the distance from the equator to the North Pole as a straight line that passes through Paris. A kilogram was defined as the mass of one liter of pure water. What about time, you ask? A second is defined as the amount of time that it takes for a specific amount of radiation to be produced by caesium-133. That is why cesium is used in atomic clocks and electronic devices, such as cell phones, to measure time.

Solutions are made of chemicals that are dissolved into individual atoms, ions, or molecules. However, when insoluble, solid particles are added to liquid, it does not form a solution but a mixture or suspension. When the solid particles are small and have a similar density to the liquid where they are suspended, they can be difficult to separate. Cesium ions create solutions that are 4 times the density of water, and so can sink to the bottom of a test tube that contains a mixture of suspended particles in water. To separate the solid from the water, the test tube can then be placed in a centrifuge, where it spins rapidly in a circle, creating a centripetal force that pulls the solid out of the mixture with water. If the solid is less dense than the cesium ion solution, the solid will concentrate and form a layer between the water and cesium chloride solution. This process is known as density centrifugation, and it is used in laboratories to isolate solid precipitates of DNA that is extracted from cells using alcohol (layer of DNA pictured in fluorescent orange) 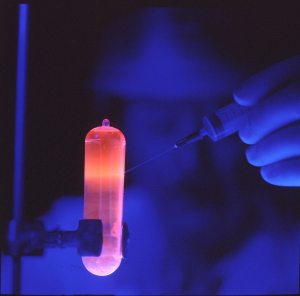 Cesium was discovered by Robert Bunsen (yes, Bunsen of the Bunsen burner) and Gustav Kirchhoff in 1860. They used flame emission spectroscopy (explained in Section 2) to identify elements in mineral water from Dürkheim, Germany. They were able to obtain a pure sample by evaporating 44,000 liters of water.

Cesium in the Future