Chlorine is the 17th element on the periodic table and it is one of the few elements that is a gas at room temperature. The gas has a greenish-yellow hue and it smells like bleach. Chlorine can be used as an antiseptic and can be used to make clean drinking water and to treat swimming pools.

Chlorine’s Place in the Periodic Table

Chlorine was given its name in 1810 by Humphry Davy, several decades after its discovery. The name comes from the Greek word “chloros” which means pale green. Chlorine is part of the halogen group. The halogens are all reactive nonmetals that can form strong acid compounds when mixed with hydrogen and most commonly found in compounds. These acids can be used to form salts.

Chlorine is a gas at room temperature and is usually in compounds when it is used as a liquid or solid. It reacts readily with other elements and can be used to make strong acids. Because it is a nonmetal element, it is not a good conductor of heat or electricity. It is categorized as a halogen, which has Greek roots: hal- (salt) and -gen (to produce), because it produces sodium salts. Chorine can be inhaled in industrial settings and cause chest pain and coughing.

Chlorine is a very light element in terms of its density, and is only a liYle more than twice as heavy as the air we breathe. Because chlorine is a gas at room temperature, you’d have to put it in very cold conditions to make the element become a solid.

Chlorine can exhibit 6 different oxidation states and a high electronegativity, which means it loves reacting with other elements. Chlorine itself doesn’t corrode because it is usually in its gaseous form, but it can be a corrosive agent for metals. Studies have shown that adding chlorine to water can make the mixture corrode metals like copper and lead more easily. Chlorine is moderately soluble in water. Chlorine reacts with almost all elements, except for the lighter noble gases. Chlorine has 7 valence electrons which means it’s only one electron away from a complete outer shell. This strongly contributes to the reactiveness of chlorine, but also that there is usually only one element bonded to a chlorine atom, to fill that one valence electron spot.

Chlorine has two naturally occurring, stable isotopes: 35Cl and 37Cl. 35Cl is the more common isotope, making up about 75% of the naturally occurring chlorine. There are many other isotopes that have been created but most of the other isotopes are highly unstable and have incredibly short half-lives. Both stable isotopes of chlorine are useful, for example in the study of toxicity of environmental pollutants.

Chlorine doesn’t form alloys because it is a nonmetal element.

The compounds made with chlorine are typically chlorides with high oxidation numbers, such as iron trichloride (FeCl3). There are some very common compounds of chlorine like sodium chloride (salt) and hydrogen chloride. Hydrogen chloride can react with water to form hydrochloric acid which is important in the production of batteries, photoflash bulbs, and fireworks. Chlorine is also found in chloroform (CHCl3) which can daze or knock people out, and mustard gas, which was used as a weapon in World War I. Chlorine can also form carbon tetrachloride, potassium chloride, lithium chloride, and chlorine dioxide. There are many compounds that can be formed with chlorine, so you shouldn’t be surprised if you see a lot of this element in your chemistry homework. 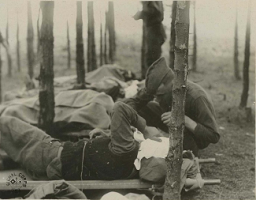 Occurrence and Abundance of Chlorine

Chlorine is only found in compound with other elements, and most commonly in the form of salt (NaCl), or halite. It can also be found in minerals such as carnallite and sylvite, which is mined in the US, China,
Germany and Russia. Given that the oceans are salt water, chlorine makes up 2% of their makeup. It also makes up 0.017% of the Earth’s crust and 0.12% of human body mass.

Chlorine has a lot of uses that are pretty commonly known, such as in treating swimming pools to keep the water clean. It is also one of the main elements of bleach and other cleaning supplies. In fact, bleach
gets its smell from the chlorine in its chemical formula. Because of its antiseptic properties, it is commonly used in industrial processes. For example, it is used in the production of paper products, plastics, dyes, textiles, insecticides, solvents and paints.

Chlorine can kill bacteria because of its disinfectant proper?es so it is used to keep biological laboratory equipment clean. It is also commonly used in organic chemistry research and production because it is a good oxidizing agent and is frequently part of substation reactions. In fact, 85% of pharmaceutical products use chlorine in some part of their manufacturing cycle.

Chlorine was originally discovered in 1774 by Carl Wilhelm Scheele, a German scientist. He mixed the mineral pyrolusite (manganese dioxide) with hydrochloric acid, which was commonly called muriatic acid in his time. They reacted to created chlorine gas. Scheele mistakenly believed that the gas contained oxygen as well. In 1810 Humphry Davy suggested that the gas was in fact the element chlorine and gave the gas its name.

Chlorine in the Future

There is frequently research being done about the toxicity and safety of chlorine, but there is also some promising medical research being done. For example, there was a recent study on chlorine atoms that were found in a novel class of an?bio?c compounds that were discovered in tiny marine organisms in the waters near Norway. The chlorine atoms are essential for the antibiotic properties of the compounds and could be used to treat methicillin-resistant Staphylococcus aureus.