Selenium is the 34th element on the periodic table and is in group 16, the chalcogens. Selenium’s form can change rather drastically based upon its intended use and temperature preparation. When used for chemical reactions it appears as a brick-red powder, but it can also appear black or grey. It is a rather rare element and is used for a large variety of reactions and processes. It is used by most organisms, including every animal, as a necessary product for cellular function; however, it is quite toxic in larger doses. Selenium is also very commonly used to create beads, glass, and various pigments.

Selenium’s Place in the Periodic Table

Selenium, like many elements, derives its name from Greek. It comes from the word selene meaning “moon”. Selenium is sometimes considered a metalloid but is more universally recognized as a reactive nonmetal. Selenium is in between sulfur and tellurium and can often take their place in compounds. However, it is actually most similar to arsenic.

Selenium is a chalcogen. This means that it is part of the oxygen family along with sulfur, tellurium, polonium, and livermorium. These elements all have the same valence electron configuration making them behave in similar fashions. Selenium has three physical forms (allotropes) which change the feel of it slightly. In its normal state it is a red, amorphous, powder-like substance. However, if it is rapidly melted it will take on its vitreous form. This form is black, lustrous, brittle, and has a varying irregular shape. If heated slowly selenium will form a gray powder instead, this is actually the most stable form of selenium. Selenium in nature is almost never found in its elemental form, or as a pure compound, in the earth’s crust. This is largely due to its reactivity. This tendency to bond also makes selenium quite stable so it does not corrode easily. Red and black forms of Se are both considered to be insulators, while gray Se is a semiconductor. This is due to its notable photoconductivity (meaning that selenium becomes more conductive when exposed to light). Selenium is also very toxic when found in doses even as small as 500micrograms. Selenium poisoning has similar effects to arsenic and begins with feelings of impaired cognitive ability, nail brittleness, headaches, nauseousness, and in high enough doses, death.

Selenium is a rather interesting element due to its three main allotropes. Temperature change is what causes Se to take these different forms. When heated rapidly, black Se is formed, and when heated slowly, at around 180o C, grey Se is formed. Red Se is very readily used in chemical reactions because, as you may guess, it is the most reactive. It is like a powder. Black Se has a rather irregular shape and is very brittle. This is due to complex polymeric rings it forms during this transformation. Gray Se is also a powder.

Selenium acts as a relatively reactive nonmetal. As read from the Pauling Scale, selenium has an electronegativity value of 2.55, making it even more reactive than Hydrogen. Selenium has two unpaired electrons in its valence shell, leaving them to be easily bonded with other elements. It is rarely found in its elemental state. The most common compound combinations are with hydrogen, fluorine, chlorine, and bromine. Se can also from two different oxides, selenium dioxide and selenium trioxide. Selenium has a special group of pairings called selenides in which selenium bonds with metals. Similarly to other chalcogens, first it bonds with hydrogen to form H2Se (hydrogen selenide). This gas is toxic, odorless, and colorless. Then, when ionized, its dianion, Se2-, goes on to bond with different metals. Selenium does not react well with acids as it tends to ionize and become acidic itself. This does make it quite soluble and reactive with bases however.

Selenium has 7 naturally occurring isotopes; however, only 5 are stable. 74Se, 76Se, 77Se, 78Se, and 80Se are all stable natural isotopes of Selenium. 80Se is, by a large margin, the most commonly occurring natural isotope and garners 49.6% of all the natural abundance. The others occur in about the same abundance. Selenium also has two other naturally occurring, but unstable, isotopes. These are 82Se and 79Se. 79Se occurs in very small quantities as a byproduct of nuclear fission with uranium. This isotope has a half-life of 327,000 years. 82Se is a primordial radionuclide, which means that it is a radioactive primordial nuclide. Primordial nuclides are nuclides found on earth that existed in their current form before the earth was formed. 82Se has a half-life of ~1020 years. Selenium also has about a dozen radioactive isotopes. Only one of which, 75Se, has any commercial value. It is used to study the function of the pancreas and the parathyroid gland by being placed into the blood stream and having the location/amount of radioactivity studied.

Selenium has seen use as an alloy, alongside bismuth, in the creation of brasses. This brass is used to replace the more toxic lead pipes. This was fore fronted in 1974 with the Safe Drinking Water Act which called for a large reduction of lead in water supplies. The new brass formed with selenium and bismuth is coined as EnviroBrass and is used in many places around the world. Selenium alloy is very similar to copper alloys.

Selenium, when used in reactions, is most useful in its acidic state H2SeO3 (selenous acid). Selenous acid can be used as a catalyst in some reactions and can be made directly by oxidizing selenium with nitric acid. As stated above selenium is also prone to forming selenides. H2Se is a toxic, odorless, and colorless gas that ionizes to then bond with metals to form these selenides. Common examples of this are zinc selenide, mercury selenide, lead selenide, aluminum selenide, and copper indium gallium diselenide. All of these compounds become semi-conductors and when paired with more drastically induced electropositive metals these selenides can be very prone to hydrolysis. Another interesting compound of selenium is tetraselenium tetranitride, Se4N4. This is an explosive compound with an orange color, it is very similar to tertrasulfur tetranitride. 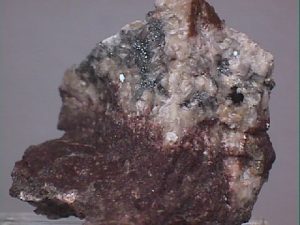 “The Mineral Clausthalite” (lead selenide) by Amethyst Galleries, Inc. is licensed under CC BY 2.0

Occurrence and Abundance of Selenium

Selenium occurs in quite small quantities in every single facet. In the composition of the universe selenium only accounts for 3×10-6% of all elements. In the earth’s crust, selenium composes just about 5×10-6% of all elements. Selenium is also found in very small doses in the human body. It comprises the same amount in us as it does in the earth’s core, 5×10-6%. It is also found in the ocean and on meteorites at 4.5×10-8% and 0.0013% respectively. Mineral selenium is quite rare although there are some selenium-rich ores present in nature. The rare minerals clausthalite and crooksite both contain selenium. It is mined in Japan, Canada, the US, and Belgium. Even so, selenium is hardly ever mined exclusively. We obtain nearly all of our selenium through by-product formation during copper ore processing.

Selenium has seen prominent use in a variety of areas across the last few decades. Selenium is very useful in that it can convey a red tint to glass. Glasswork accounts for nearly 50% of all selenium consumption. When used in glass selenium can serve two purposes. First, it can offset green or yellow tints that are often found when crafting glass with iron impurities. Second, it can color the glass itself a dark tint of red if used in correct quantities. Another useful quality of selenium is being used in brass to create a safer system for drinking water as was mentioned above in the alloy section. Selenium was also a very important part of the electronic industry until recently. Better options have been found but for a long time selenium was used for its photovoltaic and photoconductive properties in a large variety of electronics including LEDs, X-rays, and lasers. Selenium is still used today for photocopying. 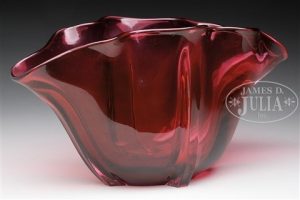 “STEUBEN SELENIUM RED GROTESQUE VASE” by Steuben Glass is licensed under CC BY 2.0

Amorphous (red) selenium is used as a catalyst for a number of reactions. This is due to its relatively high reactivity. However, this use has seen a decline in modern medicine as selenium does present issues with toxicity. Although selenium is toxic in larger doses, small doses are an integral part of human, and other animals’, health and wellbeing. Selenium as a micronutrient acts as a sort of protection against many diseases. One study conducted at Jefferson University agreed with this statement; however, supplementing with selenium is not recommended as the dosage can turn from helpful to toxic quite quickly. Selenium has also passed some preliminary trials in the treatment of Hashimoto’s disease, in which the human body will attempt to destroy its own thyroid glands. One last use for selenium is in cases of mercury poisoning. Doses of selenium can help to reverse the effects.

Selenium was first discovered in 1817 by Swedish chemist Jons Jacob Berzelius. During the production of sulfuric acid, a red precipitate was continually found in the lead chambers. This was presumed to be arsenic. The smell however was noted to be similar to tellurium. Berzelius was curious of this and decided to analyze the precipitate. Not long after, it was discovered that this was in fact a new element entirely, selenium.

Selenium in the Future

Although selenium has seen in a decrease in use in electronics and medicine it does have a promising future. First, lithium batteries have become a staple in many industries and lithium-selenium batteries are among the best for viability and battery life. This technology could become very important in the future. Also, selenium has seen some preliminary success in serious and chronic disease prevention. For example, some studies have noted a correlation between proper dosing of selenium with a decrease in diseases such as cancer, tuberculosis, diabetes, and HIV/AIDS. More research is required to form concrete evidence but the success has been noted so far. Selenium is not fully understood partly due to its rarity but will likely have a part to play in the years to come.