Plutonium is a solid metal with a silvery gray appearance. It is a member of the actinide group of metals. Plutonium has no stable isotopes and is found in nature as a product of the radioactive decay of uranium. It is the heaviest element that exists in nature. When exposed to air, pure plutonium forms a surface layer of explosive oxides and hydrides. Plutonium has no known biological role. Given its radioactivity, it is extremely harmful to human health. For this same property, it has been used in explosive devices, nuclear fuel, and power plants.

Plutonium’s Place in the Periodic Table

Plutonium is an actinide metal found in period 7. It belongs to the with the f-block group of elements. The f-block elements include 14 lanthanides and 14 actinides. Only 5 actinides exist in nature, including thorium, protactinium, uranium, neptunium, and plutonium. All of the actinides have large atoms and release energy during radioactive decay. Plutonium is the heaviest element that exists in nature, containing the greatest number of neutrons.

It was discovered in 1940 by a team of scientists that worked at the University of California, Berkeley. In this research group, Edwin McMillan had recently discovered the element neptunium, named after the planet, Neptune. So, so he decided that plutonium would also be a good name, after Pluto.

Pure plutonium is a silvery gray metal. There are multiple forms (allotropes) of plutonium, including alpha (α), beta (β), gamma (γ), delta (δ), and epsilon (ε). The most common form is α-plutonium, and it exists below 100°C as a strong, hard, and brittle metal. It is among the elements with the 20-lowest thermal conductivities,  similar to neptunium. It is among the elements with the 10-lowest electrical conductivities, and is most similar to carbon and manganese. Plutonium has multiple oxidation states. In acidic solutions, its different ions impart unique colors. It can form, oxides, hydrides, halides, carbides, and nitrides. As a powder, pure plutonium, plutonium oxide, and plutonium hydride are explosive and spontaneously combust. Its compounds must be stored in containers able to withstand its strong reducing properties, such as tantalum and tungsten.

Plutonium is solid at room temperature. It melts at 639.4°C, which is similar to neptunium and magnesium. This is a low melting point for metals, making it among the metallic elements with the 25-lowest melting points. It boils or vaporizes at 3228°C, which is similar to gadolinium and actinium. It has a very high density. The only elements that are denser than plutonium are neptunium, rhenium, platinum, iridium, and osmium. 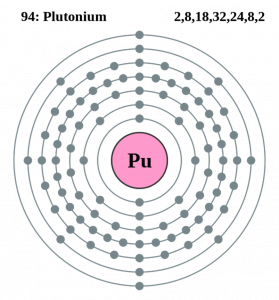 Plutonium has 8 valence electrons, which include 6 electrons in the 5f shell and 2 electrons in the 6s shell. As an f-block element, the 5f shell holds 14 electrons, so a majority of the f-orbitals are unfilled. Two main factors contribute to the reactivity of plutonium: 1) its size, 2) electron shielding. Plutonium has a low ionization energy, which is among the lowest 20 elements on the periodic table. The larger the size of an atom, the further the distance of the valence electrons to the nucleus. This distance decreases the strength of the attraction between protons and electrons. The large number of lower energy level electrons also act as a shield against attraction to the nucleus. These properties make it among the 30-easiest elements from which the first electron can be removed to form Pu1+. Likewise, it is among the elements with the 30-lowest electronegativity. In other words, it is highly reactive with a tendency to form cations.

All of the plutonium generated before the formation of Earth has been lost to radioactive decay. This is clear when you consider that the age of the universe is 13.8 billion years and that the natural isotopes have half-lives ranging from 80 million years to less than 7 thousand years. The isotope with the longest half-life is Pu-244. It would only take 5 half-lives (25), or 400 million years, to lose about 97% of all of the Pu-244 that exists on Earth today. We can extrapolate that this increases to 99.999% of all Pu-244 within 10 half-lives or 800 million years (210). A total of 20 radioactive isotopes of plutonium have been on Earth or in laboratories. The majority of the isotopes are used either as fuel for the production of heat to drive nuclear power plants, or as explosives in nuclear weapons.

Plutonium can form alloys with most other metals, except for the alkali and alkaline earth metals in groups 1 and 2 of the periodic table. Some transition metals are also poor additions to plutonium alloys, such as chromium, molybdenum, niobium, tantalum, and tungsten. For that reason, tantalum and tungsten make good containers for molten, or liquid, forms of plutonium. Plutonium is commonly alloyed with gallium, aluminum, cobalt, zirconium, cerium, uranium, and titanium. Alloys are generated to improve the properties of plutonium by reducing the rate of corrosion when exposed to the atmosphere, increasing the stability of specific allotropes, and to reduce flammability, for example.

As mentioned previously, plutonium has multiple allotropes. Their forms depend on their temperatures, each having a unique density and crystal structure. Their densities range from 16.0 g cm-3 to 19.9 g cm-3.

Pure plutonium is highly reactive and unstable when exposed to the environment. Its compounds are generally more stable and so, are the preferred form for handling sources of plutonium. Plutonium (II) hydride and plutonium (IV) tetrafluoride are used in the production of nuclear weapons. Plutonium (I) oxide is stable at room temperature when stored in a dry environment, making it less pyrophoric than other oxides. Pyrophoric describes substances that ignite at ambient temperatures. Pyrophoric metals, like plutonium, react vigorously with water. So, unlike a conventional fire that burns on carbon-based fuels, water is ineffective at extinguishing fires. That is why when working in chemistry laboratories, it is important to understand the safety precautions that must be taken before using any compound. For example, in the case of pyrophoric substances, a different type of fire extinguisher is used for burning metals.

Occurrence and Abundance of Plutonium

Plutonium is very rare in the Earth’s crust. Only traces are found, on the order of parts per trillion, associated with uranium ores. This is because plutonium is one of the decay products of uranium decay. Given its rarity, rather than isolation from minerals, pure plutonium and its compounds are usually generated as a by-product of uranium in nuclear reactors.

The major use of plutonium is in the generation of nuclear power. Certain isotopes of plutonium generate significant amounts of heat as they undergo radioactive decay. These isotopes include Pu-238, -239, -240, -241, and -242. Pu-238 generates at least 100-times more heat than any of the other isotopes, and so it is used to drive nuclear power plants. The heat generated is used to run thermoelectric generators. These are the same types of generators used in power plants that rely on fossil fuel combustion. The vapor then forces the rotation of fan-like turbines. As the turbines rotate, they spin magnets around large coils of wire, also known as an electromagnet. The spinning magnets force the flow of electrons through the wire, producing electric current that is used to generate electric power.

There are no major uses for plutonium in medical treatments or research on new applications. This is because of the dangerous with radioactivity generated by plutonium. Most research being conducted is to enhance the methods of handling plutonium in order to improve the safety of nuclear power plants and the disposal of radioactive waste.

Plutonium in the Future

After incidents like the Three Mile Island accident and Chernobyl Disaster, popularity regarding nuclear energy rapidly declined. The fear of future disasters greatly slowed the development of new power plants across the world. Since then, engineers have been working to develop safer nuclear reactors. Interest in nuclear power has also increased due to concerns about global climate change. Thermoelectric plants that burn fossil fuels to produce heat rely on the combustion reaction. During this reaction, hydrocarbons react with oxygen, producing carbon dioxide and water. Thermoelectric plants that use heat generated by radioactive decay of plutonium have no emissions. They do produce radioactive waste, however. So, an additional challenge to expanding nuclear power is the development of safe methods of storing radioactive waste to protect life on Earth from the damage caused by radiation.