Iron is a transition metal that is soft in its pure form but useful in making hard metal alloys. It is the most abundant element on Earth because it makes a large portion of the Earth’s core. Pure iron is very rare because it reacts easily with oxygen and water in the environment. This makes iron very susceptible to corrosion, forming a characteristic red rust. IIron is an intermediate conductor of electricity and heat.

Iron is an essential element to many forms of life. However, the amount of iron in the body is tightly controlled by our organ systems because, in excess, it can be toxic. Likewise, deficiencies in iron can be fatal. It is most widely used as the base metal for creating structural materials for buildings and tools.

Iron’s Place in the Periodic Table

Iron is found in group 8 and period 4. Period 4 is the first period for the transition metals. Iron is combined with carbon to create steel to impart strength to iron alloys. Copper was the first metal to be used for tools and structural materials over 11,000 years ago. It took 7000 years for humans to develop the technology necessary to create metal alloys of iron. That was because it required a much higher temperature to melt iron. The chemical symbol is derived for the Latin word for iron, ferrum. This also led the name for iron in present day languages, such as fer in French, hierro in Spanish, and ferro in Italian.

Pure iron is a soft metal that is silvery-gray and shiny in appearance. It is malleable, which means it can be forced into different shapes without breaking. It is also ductile, meaning it can be pulled to make wires. It is a better conductor of heat and electricity than most other elements, but it conducts up to 5-times lower than the best conductors like gold, copper and silver. It reacts easily with oxygen and water, creating iron oxide rust that is orange in color. It is so easily corroded that the rust does not form a protective layer like for many other elements. Instead, rust eventually takes up the majority of the metal. 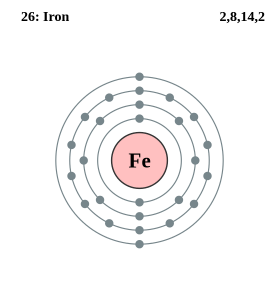 Iron 2 valence electrons are in its 4s shell. The most common iron oxidations states are Iron(II) and Iron(III). Iron(II) is a stable configuration because it donates two electrons, leaving a full 3d orbital. The third shell holds a total of 14 electrons in the 3s, 3p, and 3d orbitals. Removal of the first electron from this shell is the easiest because the attraction of electrons to the nucleus is lower because it is shared with 13 other electrons. The energy required to remove the third electron in Fe(III) is known as the 3rd ionization energy. Iron compounds form a variety of colors, including red, black, and green.

Iron has three natural isotopes. Iron-56 makes up about 92% of the iron on Earth, iron-57 makes up about 2.1%, and iron-58 makes up about 0.3% . It has 23 synthetic radioactive isotopes and only one radioisotope that can be detected in nature in trace amounts as a product of (Fe-60). Iron isotopes have been used by geologists and astronomers to study events that have taken place after the big bang and in our solar system.

Most of the alloys that are made from iron are known as steel. There are steels with different characteristics depending on the amount of other elements present in the alloys. Carbon steel, as its name suggests, is made of iron and carbon. It is the most common alloy produced from iron, making up about 90% of iron alloys. The amount of carbon added ranges from 0.05% to 2%. Increasing the amount of carbon increases the strength and hardness of the alloy. Other elements can be added in trace amounts to alter the physical properties of the alloy, and they commonly include chromium, molybdenum, silicon, manganese, nickel, and vanadium. Phosphorus and Sulphur occur naturally in iron ores, and these impurities can lower the usability of iron alloys.

One of the hallmarks of transition metals is that their oxidation states have different colors. Iron (II) oxide is black, for example. Iron (III) oxide is red, iron (III) chloride is bright yellow, and  iron(II) sulfate is green. They can also impart color when dissolved in water. Iron(IV) oxide, for example, creates a pale violet solution. Because of the variety of colors, iron compounds have been used as dyes. Prussian blue is brilliant, deep blue dye that is made of ferric ferrocyanide Fe4[Fe(CN)6]3.

Occurrence and Abundance of Iron

Iron is the most abundant element on Earth, if you include the Earth’s core. In the Earth’s crust, it is the fourth-most abundant. The only elements more abundant are oxygen, silicon, and aluminum. It is the sixth-most abundant element in the universe after hydrogen, helium, oxygen, carbon, and neon. It is about 100,000-times more abundant than copper, for example. In humans, iron is the 13th most abundant element and is essential to many forms of life on Earth. It is necessary for enzymatic reactions that take place inside cells, and forms complexes with proteins in order to transport other essential elements throughout the body. In excess, iron can be toxic because it reacts with peroxide in the blood, and the product of that reaction creates very reactive oxygen radicals. Oxygen radicals are compounds or atoms that contain an extra electron. This makes them very reactive and damaging to other important biochemicals in the body, like DNA, proteins, and lipids.

The most common uses of iron are to make alloys. Iron alloys are used in almost all materials that require strong metals. For example, cast iron is used to make iron gates and cooking vessels. Think of the traditional image of a witch next to a black cauldron creating a magical potion. Although that image is fictitious, in reality, the black cauldron would be made of cast iron. The black appearance would be a surface layer of iron(II) oxide. More refined alloys of iron include stainless steel. Stainless steel is more resistant to corrosion and stronger than cast iron. Stainless steel is part of our everyday life in the form of cooking tools, like pots and knives. It is used in architecture and interior design to add metal accents to buildings and furniture.  High carbon steels that are hard and strong are used in the construction of buildings because it can resist forces that push buildings, like wind. They can also resist massive pressure from the enormous weight of buildings.

In science in medicine, stainless steel is commonly used to make specialized medical equipment. Because it is malleable, it can be manipulated into very precise shapes for very specific tasks, like surgery. Because it is resistant to corrosion, it can be reused and sterilized, limiting the risk of infection during medical procedures. In nanotechnology, tiny particles of magnetic iron can be attached to living cells. For example, let’s say you have a sample of blood, from which you need to isolate white blood cells. Blood is a mixture of red blood cells and white blood cells. However, the white blood cells are rare and difficult to isolate. New nanotechnologies allow scientists to attach magnetic iron beads to antibodies. Antibodies attach to specific proteins on the surface of cells. So, by attaching iron to an antibody specific to white blood cells, scientists can isolate these cells using only a magnet.

Iron has been used by humans for over 4 millennia. The use of iron marked a period known as the Bronze Age. Bronze is an alloy of copper and iron, and it was used to make tools, weapons, and structures. Steel was later developed in Persia in 1000 BC.

Iron in the Future

In response to global climate change, scientists are working to develop new, renewable sources of fuel. It has been shown that iron can be used as a catalyst to decompose water into oxygen and hydrogen gas. Hydrogen gas can then be used to power combustion (meaning to burn in the presence of oxygen) engines that emit water instead of carbon dioxide.