Bismuth is a post-transition metal in group 15, period 6 of the periodic table. Pure bismuth is a solid, lustrous and silver in appearance. It has historically been used in medicine. It also has many current applications, including cosmetics, alloys, paint, and fireworks.

Bismuth’s Place in the Periodic Table

Group 15 elements are known as pnictogens. Pnictogen is derived from the ancient Greek word for choke. This refers to their relationship with nitrogen, which can displace air and cause suffocation. Other pnictogens include nitrogen, phosphorus, arsenic, antimony and moscovium.

Pure bismuth is a silvery, grey, soft metal with an appearance similar to lead and antimony. Like bismuth, lead is a period 6 element, and antimony is a group 15 element. When the solid bismuth is oxidized in air, it forms an iridescent surface that has many colors. It is a brittle metal, and so it can be broken easily. Of all the metals, it has one of the lowest thermal and electric conductivities. It is the most diamagnetic element that exists in nature. Diamagnetic materials are repelled by magnetic fields, like when two magnets are lined up with the same poles face to face (positive to positive, or negative to negative). Bismuth has very limited toxicity. 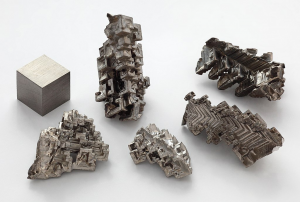 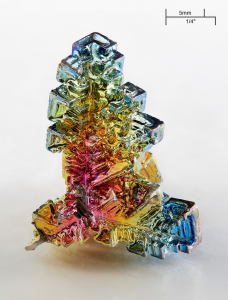 Bismuth is solid at room temperature, and liquid up to 271.5 °C. That is about the highest temperature setting on an electric oven at home. Solid bismuth would definitely melt in a very hot pan on the stove. At 9.8 g cm-3, it has a density similar to pure silver. 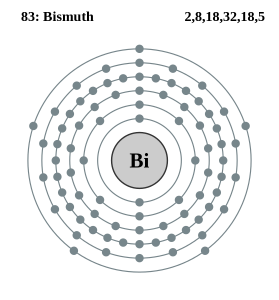 Bismuth is stable in air at room temperature and can be oxidized on the surface if placed in boiling water. An aqueous solution can be made by dissolving a compound in water. Saltwater is an aqueous solution of salt and water. When solid ionic compounds, like salt (NaCl) are dissolved in water, they usually separate into the individual ions (Na+ and Cl–). Bismuth can form aqueous solutions as Bi3+ under strong acidic conditions. Yellow bismuth(III) oxide forms when reacted with oxygen at high temperature. Dark red bismuth(V) oxide is unstable, and releases oxygen when heated.

Bismuth-209 and bismuth-210 are naturally occurring isotopes. Bismuth-210 only exists in trace amounts. So, bismuth-209 makes up almost 100% of all bismuth. Bismuth-209 is the most stable heavy isotope on the periodic table. Bismuth-213 is produced during the radioactive decay of actinium, radium, and thorium. Synthetic isotopes have also been produced by scientists in laboratories, including bismuth-207 and bismuth-208. They are radioactive and produce lead-207 and lead-208 when they decay.

About one third of bismuth produced from mines are used for alloys. Bismuth alloys have lower melting points. That makes them useful for solders. Solder is a flexible metal alloy with low melting point that is used to permanently join metals. This is often used in creating electrical circuits. Lead shrinks (i.e. becomes more dense) and bismuth expands (i.e. becomes less dense) when cooled. So bismuth is added to lead to create alloys that have a constant density.

This is probably the most common use of bismuth in our everyday life: Bismuth oxychloride (BiOCl) is a pigment that is used in make up because it has a pearly iridescence. Bismuth compounds have also been developed for a variety of medicines. For example, bibrocathol is an organic compound (C6HBiBr4O3) that has antibiotic properties and is used to treat eye infections. Bismuth trioxide is used in fireworks that burn for a short period and then explode loudly.

Occurrence and Abundance of Bismuth

Bismuth occurs in the Earth’s crust at about 2.5 parts per million. It is about as abundant as gold. There are 2.5 million liters of water in an Olympic swimming pool. If you pour a 2-liter bottle of soda into a pool, it would create a solution of 2.5 parts per million of soda. Bismuth is rarer in the ocean. In the ocean it would be more like adding a teaspoon of soda to an Olympic swimming pool. China, Peru and Mexico have the largest sources of bismuth. There is no known function for bismuth in human biology. Bismuth mostly exists as oxides and sulfides minerals. Bismuth oxide is known as bismite. Bismuth sulfide is known as bismuthinite. 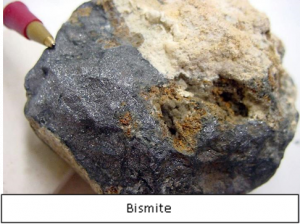 If you have ever taken medicine for a stomach ache, it is likely that it contained bismuth subsalicylate. It is the active ingredient in brands like Pepto-Bismol. Bismol refers to bismuth. Bismuth compounds have a variety of colors, so they are used as pigments in artist paints, like oil paint, acrylic paint, and watercolors. Bismuth is also used to create ceramic glazes.

Scientists have developed the uses of bismuth in our everyday life. But bismuth itself is not used commonly by scientists for any known research.

Bismuth is one of the first ten metals to be discovered. It was discovered by Claude François Geoffroy in 1753. He was able to show that it was different than lead, which has a similar appearance and physical properties. It is thought that the name was derived from an old German word for white substance, weissmuth.

Bismuth in the Future

Governments around the world have adopted regulations to limit the use of toxic substances. Therefore, the demand for bismuth is increasing because it can be used to replace lead. Lead was used widely in plumbing and paint, which contaminated tap water and surfaces that were commonly painted, like walls and toys.