Arsenic is the 33rd element of the periodic table and it’s a brittle, steel-gray metalloid. However, it has two other allotropic forms which are yellow and black. Arsenic’s classification as a metalloid means it has properties in between those of metals and solid nonmetals. We’ll go more into those interesting properties later. Arsenic is commonly used in wood preservation and insecticides because of its high toxicity.

Arsenic’s Place in the Periodic Table

Arsenic’s name comes from a couple different words in ancient languages. The ancient Persian word zarnikh means “yellow orpiment”, and refers to a mineral that resembles gold. Arsenic’s name also comes from the Greek word arsenikos which means “potent”. Arsenic falls within group 15, or the nitrogen group. All elements in the group have the same electron configuration in their outer shell. 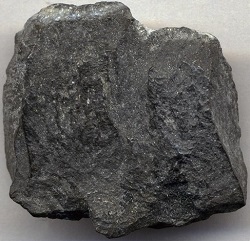 Arsenic can be found in its pure, brittle form, but it is most commonly found in various minerals that then to be less flaky. It does not corrode easily itself, but can be corrosive to humans and animals; it is highly toxic in large quantities to humans and animals. Arsenic is capable of conducting heat and electricity, but is a pretty weak conductor because it’s a semimetal and tends to take after nonmetals in that regard. It’s relatively stable, but when exposed to humid air, the surface oxidizes to a golden bronze tarnish.

Remember how we mentioned that arsenic has interesting properties? Well, if you notice, arsenic’s boiling point is at a lower temperature than its melting point, which doesn’t initially sound like it makes sense. But, there’s an explanation for that! When heated at standard atmospheric pressure, arsenic goes directly from a solid to a gas in a process called sublimation. To form liquid arsenic, you have to raise the atmospheric pressure to 28 times the standard. At this increased pressure, liquid arsenic will form at its melting point. The boiling point at this pressure would be higher than it is at standard pressure and higher than the melting point.

Arsenic has some interesting acid/base properties. For example, the oxide of arsenic is amphoteric, which means it can act as both and acid and a base. Because of this property, its likely you’ll see arsenic in any acid/base homework problems you have. Arsenic can form covalent bonds readily, but isn’t as reactive as metals with lower numerical oxidation states. It has the same outer shell electron configuration as nitrogen (five), which means they both prefer to form 3 covalent bonds.

Arsenic only has one stable isotope, 75As, so whenever arsenic is being used for general or scientific purposes, this is the isotope they’re referring to. However, there are 33 highly unstable radioisotopes that have been discovered for arsenic. Most of these isotopes decay in a matter of seconds or even milliseconds, but there are a handful that can last days. There is little explored use for the nonstable isotopes that have been discovered.

Arsenic can be added to several metals to make useful alloys. For example, arsenic can be added to lead-antimony alloys to be used in lead acid batteries. It can also be added to copper and used for heat exchangers and condenser tubes. In general, adding arsenic to any alloy makes the metal more ductile, which means you could draw it out into a thin wire. Lastly, certain productions of bronze include very small amounts of arsenic in the mostly copper/tin alloy.

Arsenic trioxide is one of the few compounds of arsenic that are used to produce the pure element. This means it is commonly used in chemical manufacturing as well as pharmaceutical manufacturing. Arsenic acid is another common compound and is considered a weak acid and produces arsenate salts. The Arsenate salts are common contaminations for deep well water. Arsenates are also usually the form of arsenic that is most commonly used in insecticides.

Occurrence and Abundance of Arsenic

Arsenic is mostly mined in China, Chile, Russia, Mexico and the Philippines. Arsenic is mostly found in minerals such as arsenopyrite, realgar, and orpiment, but it can also be found in its pure form. A majority of commercial arsenic is obtained by heating arsenopyrite to produce a pure form. Arsenic makes up 0.00021% of the Earth’s crust and 0.00018% of meteorites, but there are only negligible amounts in humans and in the oceans.

Arsenic is used in a lot of common items such as rat poison and insecticides. For these purposes, arsenic is being used for its toxicity, so it’s important to handle these products with care, because they can also affect humans. Arsenic also is an important part of the lumber industry because it is used for wood preservation by killing any insects or parasites that could damage the wood. It’s also used for preservation in the leather tanning industry. Finally, the lead alloys created with arsenic can be used for car batteries and bullets.

The most common scientific use of arsenic is in the form of gallium arsenide which is used in semiconductors. These semiconductors can then be used for a whole host of purposes like LEDs, laser diodes, and transistors. It can also be a food additive for animals to help them gain weight, so it has been explored as an option for the livestock industry. Even though it is highly toxic, it has been used in trace amounts for syphilis and cancer treatments.

Arsenic is another one of those compounds that has been around since ancient times. Minerals containing arsenic were mined by early Chinese, Greek and Egyptian civilizations for various common purposes and it is believed they knew about arsenic’s toxicity. It is believed that the first purification of arsenic was by Albertus Magnus in 1250. He obtained it by heating soap with the mineral orpiment (As2S3). Much later, Magnus was declared the patron saint of the natural sciences by the Catholic Church.

Arsenic in the Future

Research is continuously being done on the toxicology of arsenic because it tends to contaminate drinking wells in Southeast Asia, which leads to health problems. Much of the research focuses on the mechanism of how arsenic induces cardiovascular disorders and carcinogenesis. Once the mechanism is better understood, research will have to turn toward preventative measures to cut back on the number of health complications.