Tin is a post-transition metal that is soft, malleable, ductile, and silvery white. It has the largest number of stable isotopes of any element. It was first used during the bronze age (3000 BC) and may be most widely known for its use in “tin cans.” Additional applications include soldering, LCD displays, batteries, anti-cavity treatments, and biocides.

Tin’s Place in the Periodic Table 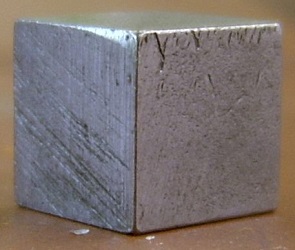 Tin has the lowest melting temperature of any group 14 element. There are two forms of tin that have distinct crystal structures, or arrangement of atoms as a solid. a-Tin is known as gray tin. It is only stable at low temperatures (less than 13.2°C). It is brittle and does not have metallic properties because the atoms are bonded covalently. These properties limit its applications as a metal. b-tin is known as white tin. It is stable at room temperature and above. It has metallic properties and is malleable. Tin is stable in water but reacts with strong acids and bases. Tin conducts heat and electricity as well as iron and platinum but about 5-times less than the best conductors, copper and silver. Tin has multiple stable oxidation states, but the main ones are +2 and +4. It has no known biological role and can be toxic in certain chemical forms.

Tin is solid at room temperature and has a density similar to zinc and iron. It melts at 291.93°C. At that temperature, paper would spontaneously combust. 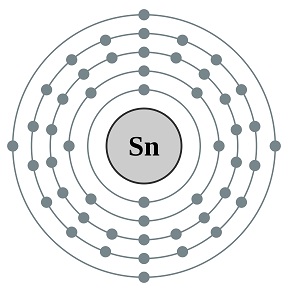 About half of all tin-containing alloys are used for solders. Solders have low melting temperatures, and so are used to join electrical circuits and metal pipes. Tin bonds easily to other metals, and so it’s used as an anti-corrosive coating on lead, zinc, and steel. Pewter is an alloy dominated by tin. Pewter was widely used as a decorative metal in ancient Egypt. It was used to make bowls, mugs, and plates before the invention of porcelain. It was also used as the base metal for coating with more precious metals, such as silver. Tin is also 12% of the common alloy, bronze.

Tin oxide is amphoteric. Amphoteric is used to describe compounds that can dissolve in both acidic and basic solutions. Tin sulfide is known as mosaic gold. It has a yellow, crystalline appearance, and so can be added to paintings to give a unique reflective property. Diethyltin diiodide ((C2H5)2SnI2) is used as a biocidal agent to prevent biofilm formation. Biofilms are layers of living microorganisms on surfaces.

Occurrence and Abundance of Tin 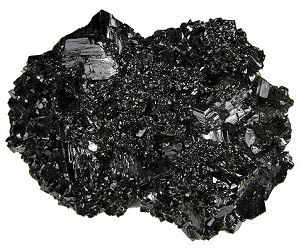 Tin makes up 4×10-7% of the universe. This is a magnitude similar to platinum. Tin is the 49th most abundant metal in the Earth, between bromine and europium. It has an abundance of about 10-times less than lead, and 25-times less than copper. It is most commonly found as an oxide known as cassiterite (SnO2), which is often found in granite rock. The primary countries that have significant tin deposits include China, Malaysia, Peru, Indonesia, Brazil, Bolivia, Russia, Australia, and Thailand. Collectively, they have over 4 million tons of tin reserves. Food that is not packaged with tin has a small amount of tin from the soil, at about 1 parts per million (ppm). Foods that are packaged in tin cans can have up to 25 ppm of tin. From these sources, there can be up to 20 mg of tin present in all tissues and fluids of the human body.

Tin has many common uses. Historically, it was used in the fabrications of bronze materials as far back as 3000 BC. Today, we most commonly hear of “tin cans,” used to store food for long periods of time at room temperature. In fact, tin cans are not made of tin but are tin-plated. Tin cans are made of steel that is covered in tin. Tin does not react with water and forms a protective oxidized layer that protects the steel from corrosion. In terms of tin production, it is mostly used to make solders. Solders are metal alloys with low melting temperatures that can be used to join electrical circuits and metal pipes. Tin oxide is similar to indium oxide in that they can both form thin, transparent layers on glass. These layers can conduct electricity and are used commonly to make LCD television screens. Tin is also used as negative electrodes found in lithium ion batteries.

Tin can also be used to treat dental cavities. We have all heard of fluoride supplements in toothpastes and tap water. Sodium fluoride is most commonly used. However, researchers have found that tin fluoride is more stable.

Tin was first used in Mesopotamia, where present-day Iraq is found. So, it is not known who discovered tin originally. The word, tin, is derived from Germanic languages, such as German (zinn), Swedish (tenn), and Dutch (tin). The symbol for tin, Sm, is derived from the Latin name, stannum, which was used to describe alloys of silver and lead.

Tin in the Future

Researchers have recently invested in a tin material that is only one atom thick and can conduct electricity. It is called stanene. Scientists are excited about this material because it could be the only material that conduct electricity at 100% efficiency at room temperature. This is significant because this property is usually reserved for superconductors, which are only 100% efficient at very low temperatures. Stanene has the potential to be used in electronics that consume less energy and produce less heat.