Francium is quite a unique element. It is the 87th element on the periodic table and is denoted by the symbol Fr. This element is extremely radioactive, it’s most stable isotope, francium-223 only has a half life of 22 minutes! Much about francium remains quite unknown, and scientists believe that many questions regarding this element may never actually be answered due to its nature.

Francium’s Place in the Periodic Table

Francium is a group 1 alkali metal. The alkali metals occupy the first group of the periodic table and are known as being reactive, electropositive, monovalent metals. These metals easily form strong alkaline hydroxides. Francium, however, is an exception to this description. This element was previously known as eka-caesium but was eventually named francium after it was studied further. Francium is thought to have similar properties to other alkali metals in its group, but studying this element has proved immensely difficult. 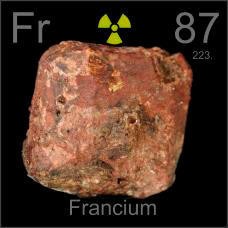 Due to Francium’s extreme radioactivity and extremely short half-life, much about the element is completely unknown. Francium is nearly never found in nature, and we are still unsure what Francium would look like in abundance, as it is not only extremely dangerous, but it is also basically impossible to accrue a large enough sample to be observed in this way. It can be extrapolated that Francium most likely appears as a solid metal, since it is an alkali metal. Francium is also thought to behave like other group one metals when it comes to corrosion, in that it would corrode quite easily, but there is no true evidence for this.

Thermal and electrical conductivity both appear to be in line with other elements in francium’s group, especially caesium. Francium and caesium appear to be just about equal in many physical and chemical properties, and this has allowed scientists to be able to gather at least some data on this element, but this is calculated and extrapolated data, rather than observed. There are no completely stable isotopes of francium.

There is very little to go on with regards to the texture, appearance, or shape of Francium. It is believed that francium would appear as a solid metal and the crystal shape is predicted to be body-centered cubic. Some data has been collected.

The chemical properties of Francium are very similar to the physical properties in that they are largely calculated and very much unknown. In terms of chemical stability, francium has basically none. It’s half-life of only 22 minutes is comparable only to the element astatine, which has a half-life of 56 seconds. There is however, a synthetic version of astatine with a half-life of one hour. However, Francium does not follow this trend as its synthetic variants are all even shorter lived.

The electronegativity of francium is rather low, and although, through some methods, francium is able to create compounds with other elements, they are again quite short lived and have very little, if any, practical uses. Francium is strongly basic, but due to its half-life that does not account for much. Just like caesium, francium is a heavy element with only one valance electron meaning that it should, in theory, be quite reactive and prepared to form alkaline hydroxides.

Francium, as of now, has 34 known isotopes. These isotopes contain an atomic mass range of 199 – 232. Francium has seven metastable nuclear isomers, which means they are isomers that have the same mass and atomic number but exist at different levels of excitement. Only two of francium’s isotopes francium-223 and francium-221 occur in nature. All others are synthetic. Of the two that occur in nature francium-223 is much more common. It is believed that francium-223 is, and will remain, the most stable isotope of francium, even when considering synthesizing. Francium-223 is one of the products of the actinium decay series. This series is part of the natural decay of radioactive material.

Francium is the daughter isotope of actinium-227, and once complete, francium will then decay into radium-223. The process by which this happens is beta decay. Beta decay is radioactive decay in which electrons are shed. Francium’s other natural occurring isotopes, francium-221, is a product of the neptunium decay series. It is the ninth product in the series and is just after actinium-225 and degrades into astatine-217 by alpha decay. Alpha decay happens when protons are shed from a nucleus rather than an electron. Francium-221 has a half life of only 4.8 minutes. Of all francium’s isotopes the shortest-lived ground state isotope is francium-215. This isotope has a half-life of only 0.12 micro seconds. However, there is one shorter-lived isotope, francium-215m, which is one of the metastable isomers, which has a half-life of only 3.5 nanoseconds.

Francium has no applicable alloys.

Occurrence and Abundance of Francium

Francium is the second rarest element on earth with less than 30g on the planet at any given time. Other abundances are completely unknown. When found, it is inside uranium and thorium ores in nature, but this is due to decay rather than compound formation. Francium is formed synthetically by a fusion reaction with gold-117 being blasted with oxygen-18 molecules. The energy of the oxygen beam causes the synthesis of francium in many different isotopes.

There are no commercial uses for Francium at this time.

In the sciences, francium has been used periodically in different sets of research. Francium has been notably used in atomic structure research and in a few other fields of chemistry, spectroscopy being one of the most popular. This is because francium contains a rather simple atomic structure, and is easily trapped, cooled, and synthesized. The results of these experiments have led to a greater understanding of energy level between atoms and the coupling constants of different subatomic particles. Other studies of francium have held results quantifying energy level changes, results that have been concurrent with predicted data from quantum theory.

Francium has undergone a decent amount of mis-classification before being properly studied. In 1925, a soviet chemist, D. K. Dobroserdov, claimed to have discovered eka-caesium. He ended up publishing a thesis on the element and coined it russium, named after his home country of Russia. The very next year, a set of English chemists, Gerald J. F. Druce and Frederick H. Loring were analyzing and interpreting an image obtained by x-ray of manganese(ll) sulfate. They incorrectly identified it as eka-casesium, and named the element alkalinium, as it was the heaviest alkali.

Francium was eventually correctly identified by Marguerite Perey in 1939. She made the discovery and deemed it Francium as a tribute to her country, France. There was some drama surrounding the discovery however when a myriad of other scientists either claimed the discovery or supported others who they believed did. Thanks to Perey’s meticulous and detailed notes however, all other claims were discredited.

Francium in the Future

Francium will very likely never have any practical uses. It is, however, useful to a degree in the lab. It has been, and will continue to be, used to study alpha and beta decay, states of excitement, and the movement of oxidation levels.