Tungsten is a transition metal in nature that has a shiny, silvery-gray appearance. Pure tungsten is brittle but hard. It has many uses, including lighting, improved alloys, jewelry, and medical research.

Tungsten’s Place in the Periodic Table

Tungsten is a transition metal in group 6 and period 6. Transition metals are those found in groups 3 to 12 of the periodic table and they have partially filled d-orbitals. In nature, tungsten is rare but exists in compounds with other elements. As you can see on the periodic table, the symbol for tungsten is not derived from its name. The W is derived from the name of the mineral in which it can be found: wolframite. 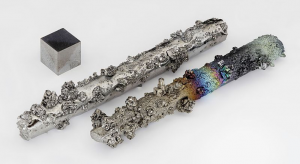 Tungsten is well known for having the highest melting and boiling points of any element discovered so far. Its density is also very stable at these temperatures, and so it does not easily expand or contract on heating or cooling. It does not react easily with oxygen, acids, or bases. It is stable at a wide range of temperatures and forms a thin film of tungsten oxides as tarnish on its surface. Tungsten is a good conductor of heat and electricity. It exists in nature as oxides and is found with iron, magnesium, and calcium. It is the only transition metal known to have a biological function. It is used by some bacteria as a factor required for metabolism. Although it is not immediately toxic, it has been linked to cancer in humans.

Tungsten is solid at room temperature and has a similar density to gold. It melts at 3422°C, which is close to the melting point of diamonds. Diamonds are made of pure carbon but don’t actually have a real melting point. That is because at this temperature diamonds sublime, which is the phase transition of a solid to a gas. Therefore, tungsten has the highest melting point of any element. It vaporizes at 5930°C – hotter than the surface of the sun! 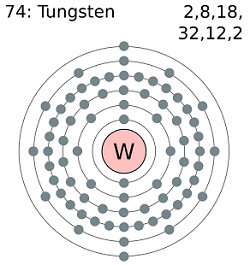 Tungsten has two valence electrons and 4 electrons in its 5d orbital. It is most stable when these electrons are shared with another element, so it exists most commonly in the +6 oxidation state. Tungsten is highly resistant to oxidation, and reactions with acids and bases. Therefore, it forms a limited number of compounds in nature.

Polyatomic ions are ions that contain more than one atom. For example, Na+ is a monoatomic ion, and NO3– (nitrate) is a polyatomic ion. In nature, tungsten can form polyatomic ions as tungsten oxides in a complex lattice structure with phosphate or silicate. One example is the phosphotungstate anion, which is used in the production of fabric dyes. Tungsten (IV) oxide is used to fireproof fabric. Tungsten (III) oxide is used in coating materials to absorb infrared light.

Occurrence and Abundance of Tungsten

Tungsten is most commonly found in a mineral called wolframite. Wolframite contains tungsten oxide, iron, and manganese. Tens of thousands of tons of tungsten are produced every year from its mineral sources. Tungsten makes up 0.00011 % of the Earth’s crust and 5×10-8 % of the universe. It is produced as a powder because its high melting temperature makes it too expensive to melt into molds. China is the largest producer of tungsten but there are tungsten mines across the globe. Tungsten is known as a conflict mineral because of unethical mining practices that have funded war in the Democratic Republic of the Congo. 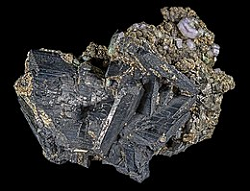 Tungsten carbide is used to make metallic tungsten rings for the jewelry trade. Addition of nickel makes the jewelry more lustrous or shiny. Because tungsten rings are very hard, they resist scratches from everyday wear and tear. Tungsten is also useful in jewelry because it is hypoallergenic. Tungsten oxides, known as tungstates, are used for ceramic glazes. Calcium and magnesium tungstate are used in fluorescent lights. Cutting tools can be made from high speed steel, which contains tungsten, to cut hard metals.

Tungsten is used as an electron acceptor of X-rays. Therefore, it is used in radiation shields to protect people from samples of radioactive material. It is also used in electron telescopes on space ships that detect cosmic rays from the Sun.

Carl Wilhelm Scheele discovered tungstic acid in 1781, and suggested that the compound might be made up of a new element. At the time, tungstic acid was used to dye fabrics. Two brothers from Spain, Jose and Fausto Elhuayer, reacted carbon with tungstic acid to isolate tungsten. They named it wolfram after the primary tungsten mineral, wolframite.

Tungsten in the Future

Tungsten polyanions are being studied for their use as anti-cancer drugs that suppress tumor growth. They have also been shown to disrupt the accumulation of proteins in the brain that cause Alzheimer’s. They are also being used in the development of alternatives to toxic, chlorine-based bleaching for paper production.