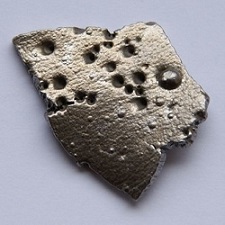 “Cobalt (27 Co)” by Hi-Res Images of Chemical Elements has not been altered and is licensed under CC Attribution 3.0 Unported.

Cobalt is a shiny silver-blue metal at room temperature and pressure.  It is a transition metal that is located with the other transition metals in the middle of the periodic table (the d-block). Cobalt is used in magnets, gas and jet turbines, paints, and pottery.

Cobalt’s Place in the Periodic Table

Cobalt’s name is derived from a German word: “kobald” which means “goblin.” This term originally came about because miners wanted to use the cobalt ore to produce copper or nickel, which failed (it produced cobalt oxide instead). The cobalt ores always contain arsenic, a highly toxic element, which would be released during the attempts to produce copper or nickel, adding to the difficulty or trickery of dealing with this substance.

Cobalt is the first element in Group 9 of the periodic table. Group 9 elements fall within the larger group known as the transition metals. The first three elements in Group 9 are all hard, silver metals with high melting and boiling points. They are all relatively rare in the Earth’s crust. Meitnerium (the fourth element in the group) has never been found in nature. It can only be synthesized using nuclear reactors.

Cobalt is a hard, shiny metal with a blue-ish tint. In nature, it is found as part of rock minerals. It is able to withstand high heat without melting and is resistant to corrosion, important qualities for many applications. Humans do need trace amounts of cobalt to survive, but cobalt is a carcinogen when consumed in large amounts. In general, cobalt and its compounds are considered slightly toxic to the skin and moderately toxic when ingested.

At room temperature and pressure, cobalt is a lustrous, hard, and brittle metal. Something unique about cobalt is that it is magnetic. It is one of three naturally occurring magnetic elements (the other two are iron and nickel). This magnetic property stems from how the electrons are arranged within the cobalt atoms. Electrons can have one of two configurations, either “spin up” or “spin down.” When electrons are paired in an orbital, they are paired with one spin up electron and one spin down electron (following the Pauli Exclusion principal), canceling out any magnetic moment. However, in the case of cobalt, it has three unpaired electrons which all share the same configuration (following Hund’s rule), so the magnetic fields of these unpaired electrons join together to give an overall magnetic atom. Additionally, cobalt retains its magnetic property to the highest temperature of all magnetic elements (1115 °C). The higher the temperature, the more likely materials are to lose their magnetic properties because the high temperature provides energy for the electrons to move around and change configurations, disrupting the magnetic field.

Cobalt is a moderately reactive metal. In air or oxygen environment, it is oxidized, forming a thin layer of cobalt oxide on the surface of the metal. This layer serves as a protection or passivation layer that prevents further oxidation or corrosion. Like all transition metals, cobalt is a good conductor of heat and electricity due to the ability of the valence electrons to move freely between atoms. A quality of all transition metals is that they can form bonds using electrons from more than one of their electron shells. They are able to do so because an outer shell of electrons starts to fill before the previous shell is completely full. In cobalt, for example, there are already two electrons in the 4s orbital when the 3d orbital is not yet full (it still needs three more electrons to be full).

Only one stable isotope of cobalt exists: 59Co. Therefore, 59Co has a natural abundance of 100%. There are 22 other radioactive isotopes of cobalt that exist. Of those, several have relatively long half-lives. 60Co is the most stable with a half-life of 5.27 years. 56Co, 57Co, and 58Co have half-lives of 77.27 days, 271.8 days, and 70.86 days, respectively. Most of the other isotopes have half-lives that are shorter than one second. 60Co is used for cancer treatment because its gamma ray radiation can be used to target tumors, and it is also used in some countries to preserve food.

Cobalt alloys are known for their magnetic properties, corrosion resistance, wear resistance, and strength at high temperatures. These qualities (except the magnetic property) constitute the requirements of a superalloy or high-performance alloy. Aluminum-nickel-cobalt alloys include between 5 and 35% cobalt by weight, and iron-cobalt alloys include 5 to 12% cobalt by weight. Cobalt is included in both of these alloys to help preserve their magnetic properties, as these alloys are called “permanent magnets.” Cobalt-based alloys are used for turbine blades for gas turbines, aircraft jet engines, dental prosthetics (because nickel, the metal typically used, can be an allergen for some people), and orthopedic implants. Cobalt-chromium-molybdenum alloys are used for hip and knee replacements. A platinum (95%) and cobalt alloy is used in jewelry.

Cobalt has two allotropes, and the form that it takes depends on temperature. Below 417 °C, the beta form is more prevalent. The beta form has a close-packed hexagonal structure. Above 417 °C until the melting point, the alpha form dominates, which has a cubic structure.

Several different cobalt oxides exist, each with a unique color. Cobalt (II) oxide (CoO) is green; cobalt (III) hydroxide (Co(OH)3)) is brown; cobalt (II,III) oxide (Co3O4) is blue; and cobalt (III) oxide is black. These compounds can be used in various chemical reactions for industrial and academic research and commercial production. Chalcogenides like cobalt (II) sulfide (CoS2) and cobalt (III) sulfide (Co2S3) are other well-known cobalt compounds. Cobalt acetate is used to make terephthalic acid from xylene. Terephthalic acid is a highly demanded industrial chemical because it is the precursor for making polyethylene terephthalate plastics (you probably recognize them with the PET label). Cobalt also reacts with halides (F, Cl, Br, I) to form various colored compounds. Vitamin B12 is actually an organometallic compound (a compound that contains metal(s) bound to organic compounds) with a cobalt atom at its center. This is the only vitamin that contains a metal atom. The iconic blue color of cobalt in pigments and pottery is actually due to cobalt aluminate (Al2CoO4). Cobalt phosphate (Co3(PO4)2) gives a vibrant purple pigment.

Occurrence and Abundance of Cobalt

Cobalt is required in the human body as a trace element because it forms part of the active site for vitamin B12. Only a very small amount of cobalt is needed in the body (~1 mg), and the abundance is 2×10-6%. On Earth, cobalt is not found on its own; it’s always incorporated into rock minerals and ore deposits. Some minerals that contain cobalt include cobaltite (CoAsS), skutterudite (CoAs3), glaucodot ((Co,Fe)AsS) and erythrite (Co3(AsO4)2 · 8(H2O)). Interestingly, cobalt, and some other transition metals, are found in the very deepest parts of the ocean floor. Cobalt has a 0.003% abundance in the Earth’s crust., and, in the universe overall, it has an abundance of 0.0003%. The Democratic Republic of the Congo, China, and Zambia are the top producers of cobalt, and it is produced commercially as a byproduct of nickel and copper mining.

Aside from cobalt’s use in alloys, it is also used in vast amounts for paint pigments because cobalt salts provide a vivid blue color (about 30% of the cobalt produced each year is used for this purpose). This attractive color is also utilized for porcelain, glass, pottery, and enamels. Have you ever seen a blue glass plate, vase, or bottle? That intense color is thanks to cobalt. Cobalt metal’s resistance to corrosion, hardness, and appearance make it useful for electroplating (a technique that uses an electric current to deposit a layer of metal onto a desired object) applications.

Cobalt has many exciting uses in scientific research, though most involve cobalt compounds, not pure cobalt. Lithium cobalt oxide (LiCoO2) is used in lithium-ion batteries (like those used in cell phones and laptops). In fact, cobalt is so integral to these powerful batteries that it is also used in batteries for electric vehicles. It also serves as a catalyst for several different reactions. A cobalt phosphate (CoPi) catalyst is one of the best water-splitting catalysts developed to date that doesn’t rely on precious or noble metals (water-splitting is of great interest because hydrogen gas, a fuel, is one of the products). Other cobalt-based catalysts are used to turn carbon monoxide (a dangerous chemical if breathed in) into liquid fuels. A cobalt-molybdenum catalyst is used to refine petroleum into liquid fuels.

Cobalt has a rich history for its use in ancient glass and ceramic objects. From Egypt to Persia to Pompeii to China, many different groups of people have made use of cobalt’s ability to provide rich blue color. Though it is not known where the Egyptians obtained cobalt, they made cobalt-colored glass as early as 1550 BC. Georg Brandt is the Swedish chemist who is credited with the formal discovery of cobalt in the 1730s. He noticed a blue-ish ore from one of the mines that his family owned, and he performed some experiments on it. However, for years, other chemists argued that Brandt had not discovered a new metal and that it was simply a mixture of iron and arsenic. Clearly, they were eventually found to be wrong, but it took nearly fifty years! Cobalt is the first metal for which we know the discoverer. All previously discovered and utilized metals have no recorded discoverers. Ever since the 16th century, mining of cobalt has been increasing in intensity due to the ever rising demand of this rare element.

Cobalt in the Future

Because of its use in pigments, alloys, and, primarily, batteries, cobalt is in higher demand than ever before. This has caused a shortage and prices to increase considerably, and the industries that depend on cobalt are worried about this shortage. It has been suggested that this shortage in cobalt alone could put a halt to electric vehicle production since not enough cobalt can be obtained to make the batteries. Because cobalt is a byproduct of copper and nickel mining, its production is heavily dependent on the demand for copper and nickel, too. The fact that the primary producer of cobalt is politically unstable Democratic of the Congo is a critical factor as well.

On the scientific front, researchers at the University of Massachusetts, Amherst are developing a way to use cobalt-iron nanoparticles to “yank” bacteria (by leveraging cobalt’s super magnetic properties) from food in food safety testing applications. This research is still ongoing, but you can observe cobalt’s superior ability for magnetic separation here: https://www.youtube.com/watch?v=TzIUuKshu_4