Sodium is the 11th element of the periodic table and is a solid, silver alkali metal. In its pure form it can be a very light sliver solid, but it is much more commonly viewed as the small white crystals of regular table salt. Salt is commonly used to flavor food and to treat icy roads, but sodium is also found in things like baking soda and the vapor that makes traffic lights yellow.

Sodium’s Place in the Periodic Table

Sodium gets its name from the Latin word natrium which means sodium carbonate. This is where the element symbol of “Na” comes from.  It is part of the alkali metal group which are very reactive, electropositive elements. 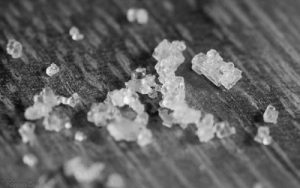 “Salt” by Roger Ahlbrand is licensed under CC BY 2.0

Sodium is a soft, shiny metal that is found in nature in various compound forms, the most common being the mineral halite. Sodium corrodes readily in various physical conditions. It is a good conductor of electricity and of heat. It is classified as an alkali metal which includes other elements like potassium and cesium. The all have the same outer shell electron configuration that makes them form strong alkaline hydroxides. Sodium is particularly stable and only has one stable, naturally occurring isotope. Sodium is considered non-toxic, but it can be dangerous to consume in large quantities.

Sodium is soft enough to be cut with a knife, because of its relatively low melting point. While the metal can sometimes have a waxy appearance, the inside of a cut will appear bright and shiny. However, this bright and shiny appearance will change quickly as the element is exposed to air, which we will go into more in the next section. Sodium is also less dense than water.

Sodium is a very reactive element, easily combining with oxygen at room temperature and violently reacting with water. When reacting with oxygen, a thick layer of sodium oxide (Na2O) forms on the surface. When reacting with water, it quickly produces hydrogen gas and releases a great deal of energy. It also produces hydrogen gas when combined with most acids, and can react with bases as well. Sodium only has one electron in its outer electron shell so it wants to give that electron up to a highly electronegative element, like oxygen for example.

There is only one stable, naturally occurring isotope of sodium, 23Na. However, there are about 20 known isotopes that have been produced that are considered unstable and six of these are radioisotopes. Two of these, 22Na and 24Na have medical applications. They can be used as tracers to follow sodium through the human body and can be easily detected. This can help with diagnostic tests and tracking effectiveness of medication. 24Na can also be used to help point out leaks in oil pipelines that are commonly buried underground.

Sodium can make alloys with several metals, but the only alloy that is particularly useful is of sodium and potassium. The alloy usually contains 40-90% potassium and is a liquid at room temperature. It is highly reactive with both water and air so it’s important to make sure you handle it with caution. Sodium-potassium alloys can be used as a coolant in neutron nuclear reactors or as hydraulic fluid in high-temperature and high-radiation environments.

We’ve talked quite a bit about sodium’s most well-known compound, sodium chloride, but there are several others worth mentioning as well. For example, sodium hydroxide (NaOH) is used to manufacture many products like paper, textiles, and soaps. Sodium bicarbonate (NaHCO3), also known as baking soda, is used to make baking products rise. Lastly, sodium carbonate (Na2Co3) is commonly used as a water softener.

Occurrence and Abundance of Sodium

Sodium is the sixth most abundant element on Earth and makes up about 2.3% of the Earth’s crust. Because sodium is so reactive, it is never found in its pure form in nature, and is usually found in minerals like halite (NaCl) which is commonly called salt. Sodium also makes up about 1.1% of oceans because they are salt water. Sodium is necessary for human life as well, with about 0.24% abundance in humans. The mineral halite can be mined in the US, China, Germany, Russia and Canada as a means to produce salt, but it can be found in minerals like amphibole, zeolite and cryolite as well.

Sodium, in the form of sodium chloride (NaCl) or salt, is an essential part of food production around the world. It is used to enhance the favor of dishes and to preserve food. There are many different variations based on how and where it is produced. But sodium has other uses as well. For example, it can be used in the production of other metals, like titanium. It can also be used to make artificial rubber. Sodium also burns bright yellow in a flame test and its vapor is often injected into lightbulbs to add a yellow color, like in traffic signals. 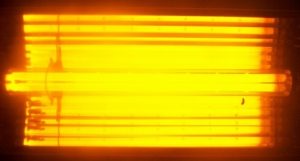 “sodium lights” by Anthony Easton is licensed under CC BY 2.0

Sodium plays a very essential role in human life, particularly as part of the sodium-potassium pump in our cells. The pump is a protein in our cells that moves 3 sodium ions out of the cell, and 2 potassium ions into the cell. This is a necessary process for the production of energy in the form of ATP. Sodium is also important for keeping a normal fluid balance in your body. When you’re dehydrated and people say you need electrolytes, that includes sodium.

Because of its abundance in the Earth’s crust and its use in food, sodium has been known to civilizations for quite some time. However, it was first isolated by Sir Humphry Davy in 1807. He produced pure sodium by the electrolysis of very dry molten sodium hydroxide (NaOH). Sir Humphry Davy used a similar method to purify several other elements for the first time.

Sodium in the Future

Sodium, in the form of salt, is currently being researched for renewable energy storage. There is a small startup in the Emeryville, California that has been doing studies of using molten salt for energy storage.  Energy is transferred to the molten salt and heat and can be released with about 70% efficiency as electricity. This is currently less effective than batteries, but could be more cost-efficient and is being explored readily during this era of increased environmental consciousness.