“Antimony” by Robert Lavinsky has not been altered and is licensed under CC Attribution-Share Alike 3.0 Unported.

Antimony is a silvery solid at room temperature and pressure. It is located on the mid-right side of the periodic table, near the other semi-metals or metalloids. Antimony is primarily used in flame retardants, alloys, electronics, and paints.

Antimony’s Place in the Periodic Table 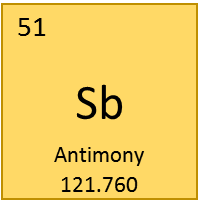 Antimony’s name is derived from two Greek words “anti” and “monos,” which mean “not alone.” This stems from the fact that in nature antimony is usually found combined with other elements, not alone, in its pure form. The symbol “Sb” comes the Roman author Pliny who gave antimony the name “stibium” after the mineral stibnite, which contains antimony.

Antimony is the fourth element in Group 15 of the periodic table, appearing after arsenic. Elements in Group 15 are referred to as pnictogens (meaning “to choke”) due to their asphyxiating properties. Antimony and arsenic are both also known for being poisonous.

At room temperature, elemental antimony is a silver-white solid that is poisonous (severely toxic). Antimony does not usually occur as a free element in nature, because it is moderately reactive, but it can be found in small quantities in many minerals (over 100 of them!), like stibnite. However, it can be found as the pure metal sometimes. Antimony is classified as a solid and semi-metal or metalloid. This means it has some properties of metals but not enough to classify it as a true metal. It shares many physical properties with sulfur (a nonmetal) and many chemical properties with metals. Like many metalloids, antimony is a relatively poor conductor of heat and electricity, worse than most metals.

At room temperature and pressure, antimony exists as a lustrous (shiny), hard, brittle solid. It can be easily crushed into a powder. A unique property of antimony is that it expands as it freezes (like water) because its solid form is less dense than its liquid form. While silver/metallic antimony is the main allotrope and generally the main form of antimony that people refer to, white, yellow, and black antimony allotropes also exist.

Antimony is stable in air at room temperature. At sufficient temperatures in an oxygen environment, it will form antimony oxides (because energy has been supplied by the higher temperatures to drive the reaction). It is resistant to corrosion in acids. Therefore, we say antimony is moderately reactive because it needs extra energy (e.g. heat) to prompt a reaction. Reactivity is mainly governed by valence electrons. Antimony has five valence electrons, so it is not very close (meaning one or two electrons away) to reaching a perfect octet by gaining electrons through reacting/bonding with another element. Additionally, antimony is midway down its group, and there is less of a driving force to reach an octet as we move down a periodic group because the valence electrons exist at higher, more unstable energies, so adding more of them doesn’t increase stability very much. Elemental antimony has a layered structure which allows for close packing (i.e. high density), but weak bonding between the layers results in a brittle and only moderately hard substance. White antimony is not stable, is created under very specific conditions, and is extremely explosive. Black antimony is formed when antimony vapor is quickly cooled to form a solid, and it can ignite spontaneously in air. It shares the same crystal structure as red phosphorus and black arsenic, and at elevated temperatures, it gradually transforms into the metallic, silver form of antimony. Yellow antimony is the least stable of the four forms. It can only be formed by oxidation of stibine (SbH3) at very low temperatures. At higher temperatures it will convert into black antimony.

Approximately 20% of the antimony supply is used in alloys. The most common types of antimony alloys include lead and/or tin. Lead-antimony alloys have improved hardness and mechanical strength and are used in lead-acid batteries (e.g. car batteries), bullets, solder (for soldering), electrical cables, and pewter. Lead-antimony is also used as a dopant (a foreign substance inserted into a material to intentionally alter the properties of the overall material) in semiconductor research and production. When tin is mixed in, the alloy is used for manufacturing organ pipes.

Occurrence and Abundance of Antimony

Antimony has no known biological role and is considered toxic, so it is not found within the human body. It is a relatively rare element and only has a 2×10-5% abundance in the Earth’s crust. It is possible to find antimony in its native metal form in nature, but it is more often found within a mineral. Though it is a rare element, antimony is actually found in over 100 different minerals including sibiconite, tetrahedrite, and ullmannite. Most often it is found as part of antimony (III)sulfide (stibnite, Sb2S3).

In the universe overall, antimony has an abundance of 4×10-8%. China is the main producer of antimony, producing nearly 80% of the world’s supply. Bolivia, Russia, and Tajikistan also produce notable amounts of antimony. It is mainly commercially produced from stibnite but can also be extracted as a by-product during copper, gold, and silver production.

Most uses for antimony actually use the antimony alloys or compounds. Pure antimony is used in the production of glass, serving to remove microscopic bubbles. This helps achieve a perfect, bubble-free TV screen, for example. It works by interacting with oxygen atoms and hindering them from forming bubbles. Antimony is also used in paints and pigments.

Antimony is used as a stabilizer and catalyst in the chemical production of PET plastic (polyetheylene terephthalate), which is the material that most disposable plastic water bottles and many other plastic items are made of. Antimony is used in several pharmaceutical and veterinary drugs or treatments.

Approximately 60% of the supply of antimony is used in flame retardants, and for this application it is in  antimony trioxide (Sb2O3) form. These flame retardants are used in clothing, fabric, toys, safety matches, and aircraft.

Antimony has been used by man since ancient times, as early as 3100 B.C., so we don’t know exactly who discovered it. We do know that in those times, Egyptians used stibnite as a black eyeliner. Jezebel is one historical figure who is known for using this makeup. In the region that is now southern Iraq, lead antimonite was used to provide a yellow pigment for glazes on bricks at Babylon. Vases and other objects made of antimony have been found from these ancient times, which is miraculous considering that antimony is very brittle and difficult to work with.

It wasn’t until Medieval times that antimony became very widely used. It was used to harden lead by making the lead-antimony alloy. A book written in 1540 by Vannoccio Biringuccio describes the first procedure for isolating antimony. In 1615, German chemist Andreas Libavius produced metal antimony by adding iron to a heated mixture that contained antimony sulfide. In 1783, a Swedish scientist, Anton von Swab, made the first discovery of pure antimony in nature.

Antimony in the Future

Antimony trioxide (the compound used in flame retardants) is classified as a carcinogen in the state of California. We are most often exposed to antimony from emissions from coal-burning power plants, vehicle emissions, products treated with flame retardants, and plastic disposable water bottles (since antimony is used in the synthesis of PET plastic, some remains in the final product). Rising concern about human exposure may impact the future use of antimony. This concern is on China’s (the main producer of antimony) radar, though, and they are reportedly working on “green development” of antimony products. Additionally, there hasn’t been a new antimony source discovered in China in over ten years, so people in the antimony production business are worried about its supply being depleted.