Americium is the 95th element on the periodic table and follows in the category of actinoids. Actinoids, along with lanthanoids, are the categories in the two rows of the periodic table that lay below the rest. It forms a silvery-white solid at room temperature and is dense, similar to lead. Americium is more common than you may think. It’s quite important in the production of smoke detectors. 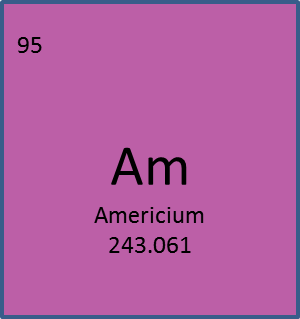 Americium is named after the America continent. The name was chosen because the element falls directly the element Europium, which is named after Europe. Americium is an actinide element based off of its group, but it also falls into the category of transuranium elements. This group contains all the elements with atomic numbers greater than 92, which is the number of uranium. All elements beyond uranium are unstable and decay radioactively.

Americium is a slivery-white solid that is very hard to produce in large quantities. Almost all of the many isotopes of Americium are unstable and will radioactively decay. Americium can be classified as an actinide, because of its location in the periodic table, and a transuranium element, because of its location after uranium. The actinide group that Americium belongs to are known for being radioactive and having an unusual range of physical properties. For example, all actinides are pyrophoric meaning then spontaneously combust when exposed to air. Also, when actinide ions are put in water, they tend to form many different colors. Americium can be harmful to humans and the radioactivity could lead to cancer, but it poses a small health risk to the public due to the fact that it is not found in nature.

Americium has roughly 19 different isotopes that have been produced at some point. However, americium-243 and americium-241 are the most common and the most stable. Americium-243 is commonly referred to simply as Americium because it is the most stable of all the isotopes. Most of the other isotopes have only ever existed in a lab, for scientific research purposes.

There has been research done on various Americium alloys for use in a radiochemical diagnostic tracer program. They have tried combining Americium with uranium, aluminum, and cerium. The cerium—americium alloys were the most successfully formed and had the best density, which was the goal of the project. However, there is little other research or use for Americium alloys.

Occurrence and Abundance of Americium

Americium is one of the elements of the periodic table that is synthetically made, meaning that it is not found in nature. Americium was first produced in a nuclear reactor, which is a common way of discovering other synthetic elements. The reactor works by bombarding an element with neutrons and can result in the discovery of new elements. 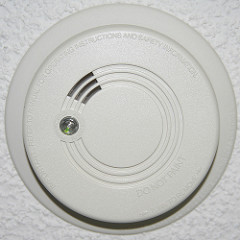 Americium was discovered in 1944 at the University of Chicago by the team of scientists Glenn T. Seaborg, Ralph A. James, Leon O. Morgan, and Albert Ghiorso. Given that Americium is not found in nature, they had to produce it. They started by bombarding plutonium-239 with neutrons in a nuclear reactor. This formed plutonium-240, the process was repeated, and then plutonion-241 was produced. Through a process called beta decay, the plutonium-241 decayed into Americium-241. This is not the most stable isotope of Americium, but it was the first to be produced.

Americium in the Future

Americium could have a future in space! More specifically, Americium is being investigated for its potential in batteries for spacecrafts. The United Kingdom’s National Nuclear Laboratory and the European Space Agency have done collaborative work on isolating the materials needed for the batteries and designing a potential model. Further studies need to be done on whether it would be environmentally safe to create a large-scale production plant, as well as making sure it would be safe for workers. If this project was successful, Americium would replace the plutonium that is currently used for these kinds of batteries. Americium can be more easily produced, has a longer half-life and could potentially cut the costs and weight of the spacecraft.