Potassium is a solid alkali metal that is the 19th element of the periodic table. It usually looks like a silvery-white powder or solid and is a very common element for a lot of reasons. Potassium is an essential nutrient for humans as well as an electrolyte, so it plays a big part in a lot of biological processes. It can also be found in some fertilizers and it’s important for the production of certain soaps and detergents.

Potassium’s Place in the Periodic Table 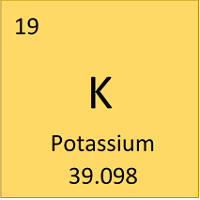 Potassium’s symbol “K” might not seem very intuitive like a lot of other element symbols are. However, the “K” comes from the Latin word kalium which means alkali, referring to the fact that potassium is an alkali metal. The alkali metals include other elements like lithium and sodium and they all tend to be very reactive and form strongly basic hydroxides.

Potassium is a soft metal that feels smooth to the touch. It is never found in its pure form in nature, only in compound form, because it is so reactive like all alkali elements with similar electron configurations. It corrodes readily and is especially susceptible to oxidation in air. In its pure form potassium is a shiny silver but when it oxidizes, it becomes a very dull graphite color. It is a pretty good conductor of heat and electricity because it is a metal, but there are many other metals that are better conductors. Potassium is necessary for human health, but like most parts of our diet, can be harmful in excess.

Potassium has a relatively low melting point for a metal. It’s a solid at room temperature but the melting point is only about double the heat of a hot summer’s day. In its pure form it is a silver-white metal but it is most commonly found in minerals that look like pretty average, orange-brown rocks. Pure potassium is soft enough to cut with a knife.

Potassium reacts quite violently when mixed with water and lets off hydrogen gas as a byproduct of the reaction. It is also quite reactive with acids and many non-metals such as sulfur, chlorine, or nitrogen. Potassium, and other alkali metals, are so reactive because of they all have one valence electron. They tend to lose this electron easily, forming ions that are incredibly reactive, meaning it prefers to bond rather than stay in the more unstable state of having only one valence electron.

There are 2 stable isotopes, but 3 that are naturally occurring isotopes. The most abundant stable isotope is 39K at roughly 93% abundance with 41K being the other stable isotope at roughly 6.7% abundance. 40K is a radioactive isotope with a very long half-life that occurs in nature. It is incredibly rare for radioactive isotopes to occur in nature. The 40K isotope is the largest source of natural radioactivity in animals and humans and is incredibly important for life. It is also used in potassium-argon dating, which is used in archeological research to accurately predict how old artifacts are.

There are a couple of potassium alloys that are used for various industrial purposes. For example, potassium-sodium alloy contains 78% potassium and 22% sodium, and is silvery liquid at room temperature. It is used as a heat-exchange fluid in atomic reactors and high-temperature processing equipment. It is definitely the most common potassium alloy and is different than most common alloys in that it’s used in a liquid form. There are also BZ alloys which are made of cesium, potassium and sodium, and are used in high end car wheels.

There are many compounds of potassium that are important and widely used, but the 4 most common are potassium hydroxide (KOH), potassium chloride (KCl), potassium nitrate (KNO3) and potassium carbonate (K2Co3). Potassium hydroxide is incredibly basic and you’ll commonly find it in your chemistry homework. Potassium chloride on the other hand is a very neutral salt and can be made from KOH and HCl. Potassium nitrate is sometimes called saltpeter and can be used in explosives and bluing steel. Potassium carbonate is sometimes referred to as pearl ash because it’s a white granular powder, and is commonly used in wool washing. 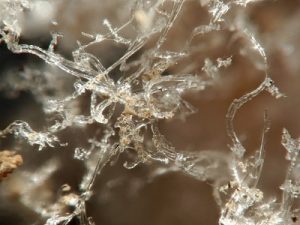 “Potassium Nitrate” by Thomas Bretton is licensed under CC BY 2.0

Occurrence and Abundance of Potassium

Potassium is the 98th most abundant element on Earth and makes up anywhere from 1.5-2.1% of the Earth’s crust. It is also quite common in humans (about 0.2% of humans) and can be found in oceans (0.042%) as well as meteorites (0.07%). Even though it is quite common in both the Earth’s crust and in humans, potassium is never found in a pure form in nature. This is because of how reactive the element is. Potassium is commonly mined in Russia, Canada, Germany, Israel, France and the USA. It’s commonly mined as the minerals alunite, carnallite, or orthoclase feldspar, and the chemical process of purification is usually electrolysis of potash (KOH).

Most potassium used for general purposes is in compound forms such as potassium chloride (KCl) or potassium hydroxide (KOH). KCI is used in fertilizers and salt substitutes. KOH is used in soaps and detergents. Potassium is also essential for the health of human beings. As electrolytes, potassium ions conduct electricity in the body and are essential for cardiac and muscle functionality.

Potassium was first purified and isolated in 1807 by Sir Humphrey Davy, a very famous scientist who worked on a lot of elemental projects. Potassium was the first element to be isolated through an electrolysis process of molten potash. Despite its relatively recent discovery, it has always been an essential element for human life and has been a part of human nutrition since ancient times.

Potassium in the Future

There is a lot of research being done about potassium in the context of human nutrition. It’s an essential element for human life but recent studies have found that only about 20% of Americans get their daily suggested dose. Current studies are being done to see if these guidelines are accurate, as well as exploring how sufficient potassium intake can help prevent conditions like stroke and high blood pressure. Given its vital importance to cardiac function and the incredibly high rates of cardiovascular disorders in the United States, research on the effects of potassium and how to use it efficiently in medications should be ongoing.